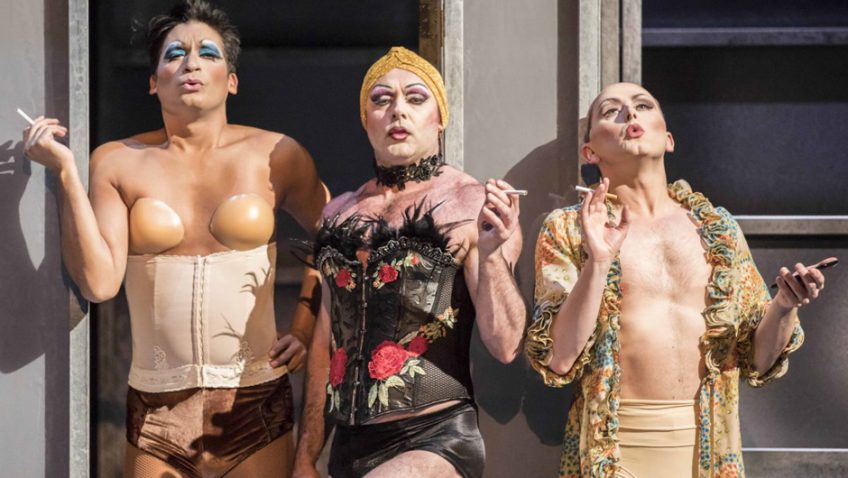 The brand new musical on its world premiere run at the Crucible is inspired by the real life Jamie Campbell, subject of a BBC3 documentary in 2011. Even at the tender age of 16, Jamie’s burning ambition was to be a drag queen, with the more immediate challenge of simply being accepted at home, at school, at large, for who he is – not a weirdo or freak, but just a gay lad who sometimes likes to dress as a beautiful girl. The first act is scintillating and Anna Fleischle’s set superb. Atop blue-grey tiles, clean, clear-cut lines and uniform box shapes in light wood, metal and ’glass’ create a modern, light, open effect. With slick turns or shunts back and forth, the ingenious set turns schoolroom into drag-queen boutique, domestic kitchen, school loo or club, while the eight-piece band is perched on high behind the towering, glassy sides throughout. This is great (apart from when they’re swigging water or changing seats.)

The opening is a joy as, brilliantly choreographed by Kate Prince, the ensemble of uniformed teenagers dances on and around classy, stylised lit boxes that are desks and seats, and whose wooden shapes and lighting are echoed on the ceiling. The opening song has year 11s and teacher Miss Hedge (fine singer Tamsin Carroll) giving it their polished all as the outstanding ensemble just about convinces us they actually are exuberant, bubbling, babbling 16 year olds.

With no brassy, full-blown musical-style belters, the score from lead vocalist of The Feeling, Don Gillespie, has striking variety and subtlety, songs ranging from ballad and pop to discreet battle march. Some ballads are of particular melodic beauty with gentle accompaniment pared to just guitar or piano. It Means Beautiful is one such, Lucie Shorthouse performing admirably in both the singing and acting departments as Jamie’s supportive friend and confidante, Pritti Pasha – a kindred spirit likewise abused as a weirdo for choosing to wear hijab and aspiring to be a doctor. Josie Walker sings beautifully, too, as Jamie’s quietly supportive, ever-loving mum (though the odd ballad does grow slightly slushy and outstay its welcome.) John McCrea, his singing less polished, perhaps, injects both humour and emotion into spoken lines and song lyrics alike, presenting a convincingly warm, innocent Jamie New, the lanky, willowy blond boy who vascillates between bouncy self-belief and moments of dejection as he suffers the heartache of a father’s rejection and the bullying abuse of school mate Dean. He has whole-hearted support, though, from mum, her friend Lee (played by sparky Mina Anwar), from classmates, and from Hugo Battersby, aka ageing drag queen Loco Chanel, owner of Victor’s Secret boutique. Particularly engaging as camp, comic, sensitive yet earthy and brash Hugo, Charles Dale is a bubbly revelation providing a welcome, meaty presence.

A big dilemma in writing stories based on fact rather than creating fictions from scratch is how far to stray from, embroider or mutilate the truth for the sake of the drama. Writer Tom MacRae’s story, spanning but a short period, is simple, linear and pretty thin: Jamie New (of Sheffield rather than Jamie Campbell’s Durham mining village) longs to be a drag queen, to be accepted for who he is and to be allowed to attend the school prom in a dress. Unlike in Billy Elliot, there’s no dramatic backdrop of social conflict, no rich sub-plots. Once we’ve encountered the ashamed, disgusted father, the abusive Dean, the inflexible school rules and the odd thug, there’s little to develop. As a consequence, act two flags after the first few numbers, losing its fizz, dynamism and impetus. We know where we’re all headed so it’s more a pootle than a nail-biting journey, especially when the dancing drag queen end-point feels somewhat tagged on. Tweaks coming, perhaps?

Six years on from the documentary, though, as they sit in the audience, London drag queen Fifi la True and mum Margaret must be thrilled at the enthusiastic standing ovations, for these ovations aren’t applauding just the piece itself, but applauding the absolute right of the Jamies of this world to live comfortably and freely as who they know they are.

The show runs until Feb 25th