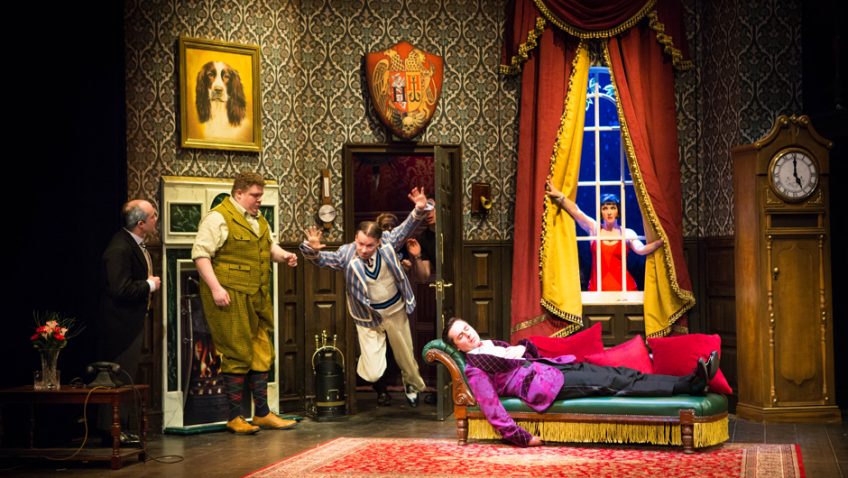 The Play That Goes Wrong

On expanding their shorter 2012 smash-hit ‘fringe’ version of The Play That Goes Wrong, LAMDA members, Henry Lewis, Jonathan Sayer and Henry Shields won the Laurence Olivier award for Best New Comedy in 2015. And not for nothing.

As in Acorn Antiques – albeit on Speed and with ten thousand innovative, hyperactive, acrobatic, surreal knobs on – prop malfunctions, rickety set mayhem and actors’ cock-ups, slip-ups, manglings, danglings, stumblings, bunglings, flashes, crashes and fluffs are the mainstay of the humour. This, you’d think, might wear pretty thin over two acts, but no, not a bit. Boundless energy and marvellous audience rapport, together with amazing skill and precise technical management (usually) ensure that engaging freshness and elements of surprise are sustained, eliciting fits of uncontrollable laughter right through to the accelerated overdrive of the manic-panic end. And if you’ve never seen a grandfather clock faint and be helped to a chaise longue, now’s your chance.

The onstage characters, members of the lowly Cornley Poly Am-Dram Society, are staging a murder mystery “Murder at Haversham Manor” on an impressively huge, handsome, ornate Victorian set with large window, numerous doors and an upstairs study, perched precariously on a wooden post. Now what possibly could go right?

As with Michael Frayn’s magnificent Noises Off, the farce within a farce structure generates constant chaos in a piece whose verbal humour shines as bright, at times, as the endless visual and physical comedy of sophisticated slapstick. Butler Perkins’ (Edward Howells) delightful mispronunciations, read from the palm of his hand, go down a treat, while the two Ronnies’ Mastermind sketch comes to mind, when, in a line cock-up, answers are given, this time, to each question just before it’s asked, by Florence (played pleasingly and very flexibly by Meg Mortell whenever conscious, at least.)

Whodunnit or Whodunwhat hardly seems to matter much, but the whole-hearted, full-bodied, life and limb commitment of the cast ensures that their dual-identity characters, no matter how silly or preposterous, still remain believable and engaging. Rapport with the actors begins in the auditorium even before the show begins, the surly Scot soundman (Graeme Rooney) retiring to operate largely from a lower box throughout. Alastair Kirton, playing to the audience as stage-struck, stripy-blazered, toothy-grinned Cecil earns particular giggles of appreciation, as does Jason Callender as unusually hyperactive murder victim, Charles. The over-sized, chequered Billy Bunter in plaid socks that is Thomas Colleymore is played wonderfully by Edward Judge, whose impossible danglings and reachings, like those of the others, require invisible precision and skill in manufacturing apparent catastrophe. Matthew Howell stands in most capably and amusingly as both Inspector in rain-mac and as Copley’s moustachioed Chris, director of previous low-scale Copley productions like The Lion …and The Wardrobe, and Cat.

This brand of fun and silliness may be light-hearted and undemanding as far as the audience is concerned, yet the stagecraft, the pyrotechnics, everyone’s every move and every thing’s every move have all been meticulously plotted, rehearsed and honed with phenomenal results, bringing the same sort of carefree, sunshine laughter elicited by the charm of Morecambe and Wise. Somehow even when you know what’s coming – or because you do – and even if you can see the join, it’s still heart-warmingly, exhaustingly hilarious.