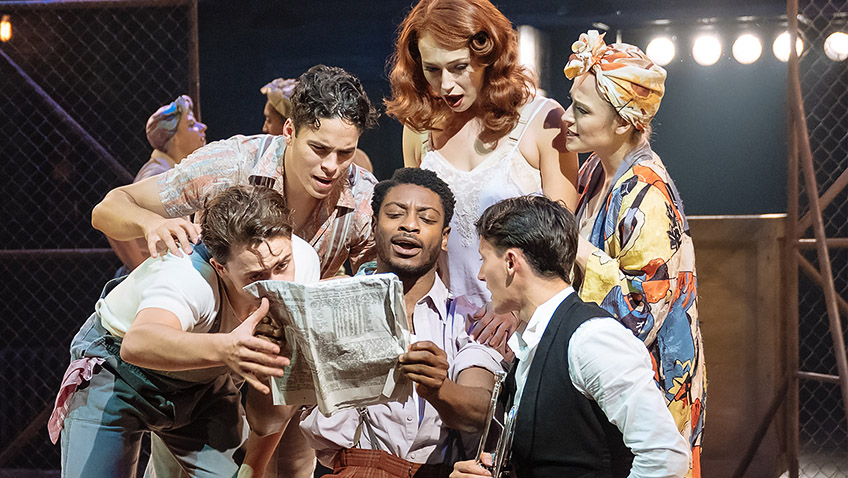 Many were on their feet to applaud the Crucible’s Kiss Me Kate, a triumph of delight. Opening with the bustle of Another Op’nin’, Another Show, Cole Porter’s most successful musical, first premiered in 1948, delivers a string of much loved classics, stuffed with melodies and lyrics that thrill anew at every hearing, from the whirling impetus of Wunderbar and From This Moment On to the heat of Too Darned Hot, and the silliness of rhyming Padua with “mad you are” and “cad you are” and the mention of “Lisa who gave meaning to the Leaning Tower of Pisa.” Under James McKeon’s smart white baton, ten vibrant, elegantly clad musicians sit on high amidst swathed drapes, disappearing behind a balcony of shabby 1940’s stage doors which are lowered as required. 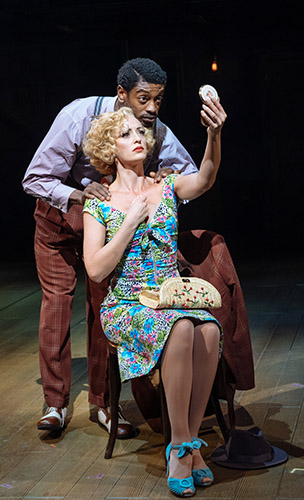 Dex Lee and Amy Ellen Richardson in Kiss Me Kate

In Baltimore, director/producer/actor Fred Graham is staging a musicalised version of Shakespeare’s The Taming Of The Shrew. As lead man Petruchio, he’ll go to any lengths to tame angry, violent, untameable virago Katherine (Kate), eldest daughter of long-suffering old Baptista (played to beautiful comic effect by John Conroy). Then he’ll marry her, inherit a fortune and have a quiet, obedient wife. (Yes, it’s a play to make current-day feminists bristle – or even implode!) Offstage, Fred and ex-wife Lilli, who plays the fiery, red-haired Kate, alternate their own fiery ding-dongs with more intimate times of fond reminiscence in a twist-and-turn relationship, which, to comical effect, continues out onto the Shakespeare stage. Edward Baker-Duly and Rebecca Lock are a wonderful team as Fred and Lilli. Their charismatic characters and relationships spark, flare and fly magnificently while their operatic flourishes are as big and splendid as their characters. Each animated solo (I Hate Men! I’ve Come To Wive It Wealthily in Padua) or duet (Wunderbar) earns loud applause, as do the big song or dance numbers of other characters, most especially in the long first act, which grips and flows so well it fairly zips along.

Sunny, Shakespearean Italy and a stage filled with bright, bright costumes and colourful cut-out trees and buildings alternate with the dark bricks, dull woodwork and dim lights of backstage Baltimore as the intriguing relationships of the various characters and of their Shakespearean counterparts entertain in grand variety. Matt Flint’s excitingly fresh and original choreography is another vital, invigorating ingredient in the mix, most especially in ensemble numbers like Cantiamo d’Amore, in the breathtaking climax to Too Darned Hot (which, incidentally, is a tad too darned long, perhaps, in this slower second act) and in the acrobatic rivalry between Bianca’s three suitors, Hortensio, Gremio and Lucentio aka Tom, Dick and Harry. 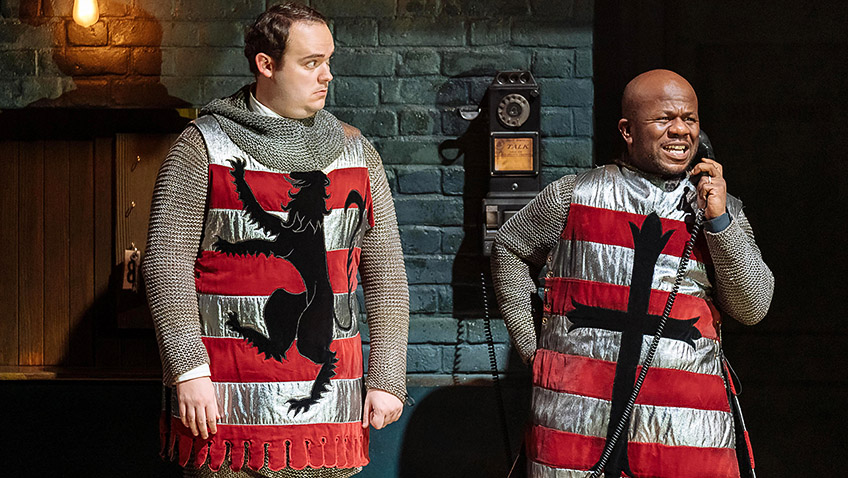 Joel Montague and Delroy Atkinson in Kiss Me Kate

Amy Ellen Richardson plays well as blond, curvy, bubble-haired Lois Lane, who turns men’s (and Fred’s) heads in a sexy instant, making the most of her big number Always True To You In My Fashion. She’s Shakespeare’s Bianca, too, virtuous younger sister to belligerent Kate. She can’t marry before her older sister is wed but is keen to. From her three wonderfully choreographed, energetic, singing, dancing, acrobatic suitors in stripy tights, she chooses Lucentio, played by offstage gambling boyfriend Bill – both played by a talented, heart-warming Dex Lee.

The ups and downs and turnarounds of romantic intrigues are further complicated by the arrival of gangsters and a big, stiff General with White House connections, whom Lilli might just marry (and Lois might just meet up with at a later date.) As the fabulous songs, fine singing, inspired dancing and great comedy keep on coming, even the two gun-totin’ hoodlum gangsters find themselves, bewildered, on the Shakespearean stage, eventually urging in their big number that everyone Brush Up Your Shakespeare. Whether you revise the Bard or not, Kiss Me Kate will certainly give you a night to remember. So all’s well that ends well, then.

The show runs at The Crucible until Jan 6th 2019