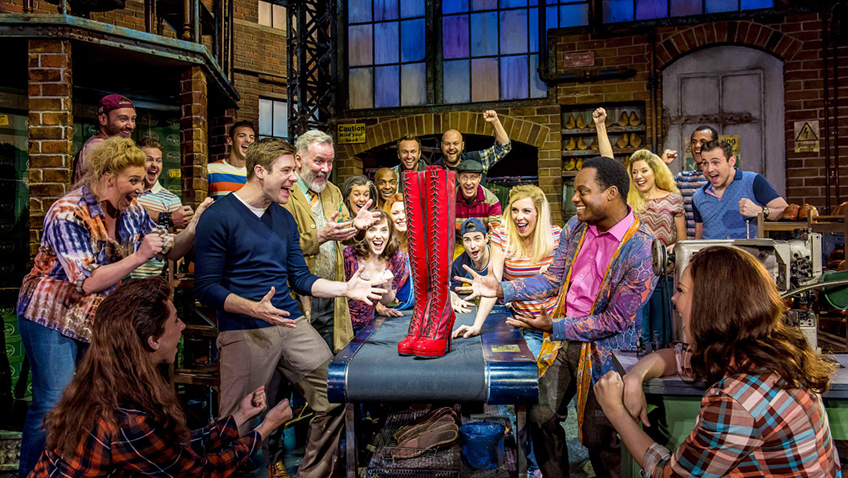 A heart-lifting, feel-good story of tolerance and acceptance

A musical about the survival of a failing shoe factory in Northampton seems unlikely – until that story is coupled with a demand for big, beautiful, high-heeled, kinky boots, strong enough to bear the weight of any man who puts his heart and soul into dancing, singing and entertaining, dressed as an elegant, sexy lady. Based on a true story, a 1999 documentary first expanded into a glorious film in 2005, then transformed into an award-winning stage musical in 2013.

The stage version’s narrative is somewhat rushed and superficial at the start as young Charlie Price is forced to change tack in life when he reluctantly inherits the family’s failing shoe factory on the sudden death of his proud, hard-working father. But characters slowly emerge and develop as traditional, drab factory life, characterised by oldies in brown Open All Hours work jackets, unexpectedly meets, confronts, and finally embraces the bright, controversial world of drag artists.

Struggle, romance, tender moments of despair, hope, conflict and reconciliation, and even a boxing match all thread ongoing human interest throughout, but undoubtedly, it’s the celebration of stunning flamboyance, heart-warming fun and the glowing glitz and glamour of the joyous world of female impersonation that comes to the fore and earns the show its standing ovations.

Set and costumes are superb. The convincing old factory with tall, artistically lit windows, metal frameworks, and a stairway that leads to an elevated office, provides excellent space below when it comes to cabaret lights, razzmatazz and a fair share of – shimmering RED.

As Lola aka Simon, Kayi Ushe has an immediate commanding, magnetic, beautiful presence. Filling Kinky Boots top to toe with haughty pride and strength, with touching sensitivity and vulnerability, with punchy, playful kick and sexy sparkle, he’s just about perfect. His six Angels, too, dressed in a variety of mind-blowingly divine outfits, are full of fabulously choreographed agility and elegance, their endless physical flexibility extending to fascinating dances on moving conveyor belts and stretching even to full splits. 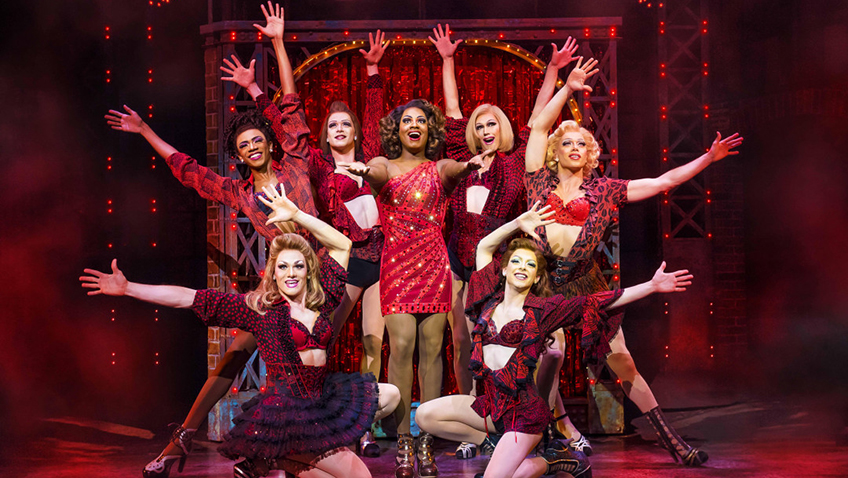 While Dmitri Lampra transforms big, round, bigoted, belligerent factory-worker Don into a more understanding, accepting and acceptable human being, Paula Lane is dippy and likeable enough as Lauren, the soft, dizzy factory worker with a blossoming crush on Charlie, a striking contrast to his intended fiancé, brittle business woman, Nicola (Helen Ternant). Understudy Joshua St Clair puts great feeling into Charlie Price’s big number Soul Of A Man, but his hint-of-Midlands accent does turn annoyingly into full-blown American talent show style every time he sings. American Harvey Fierstein wrote the book and American Cyndi Lauper the music so maybe that’s why. They’re not hugely memorable songs but Lauper earned a Best Original Score award in 2013. There’s certainly variety in their sentiment and style: guitars, drums and keyboards primarily pound out the beat in rousing celebrations of the shoe in The Most Beautiful Thing in The World and Sex is in the Heel (as Germaine Greer always maintained) or tones soften for sentimental themes like Lola and Charlie’s duet Not My Father’s Son or Lola’s touching Hold Me In Your Heart.

This heart-lifting, feel-good story of tolerance and acceptance proves that sharing what we have in common is so much wiser than allowing differences to cause conflict. The big, glitzy finale urges the ecstatic audience to Just Be. They loved it and just were!

The show tours next to Sunderland, Plymouth, Cardiff, Dublin and Southampton