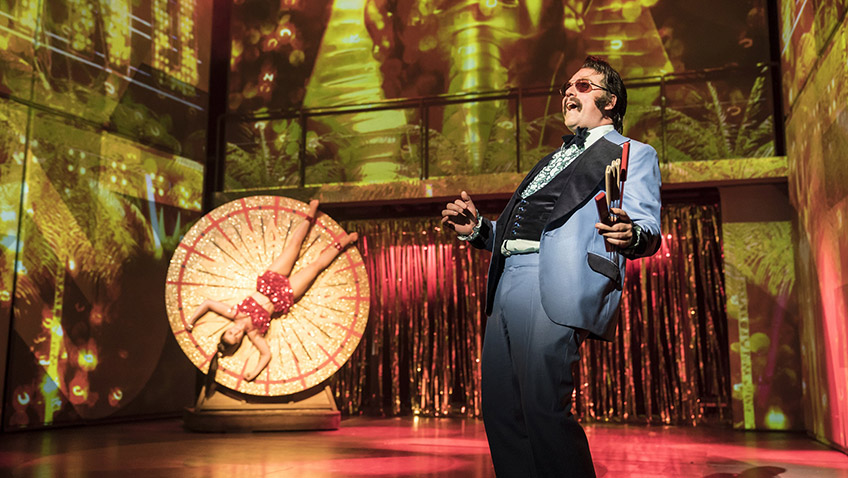 Though Dusty Springfield’s glorious music by no manner of means takes a back seat in Jonathan Harvey’s musical Dusty, it’s the storyline that carries the main impetus, and it’s a story admirably told. To the public at large, Dusty Springfield, elevated icon of the 1960s, is a legend, dubbed the ‘queen of blue-eyed soul’ for her singing, so akin to that of the black soul singers she admired, still suffering oppression, hatred and violence, especially in South Africa and the southern USA. Generally perceived as strong and confident, she was a perfectionist who knew her own mind, but this show traces and highlights the complex relationships and damaged psychology that created perpetual torments of crippling self-doubt, pain and panic in her private life. 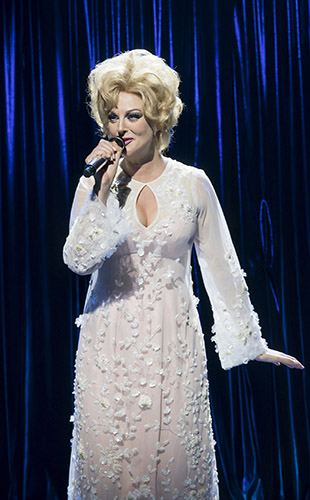 Katherine Kingsley is superb as Dusty. In fabulous gowns, trade-mark, drag-queen wigs and thick, black eye make-up she sings the magnificent hits so powerfully, so wonderfully, they induce a frisson at times. At the same time, her portrayal of fragile, angry, hurt, lonely Mary O’Brien is very moving, as she descends through the 1970s to the depths of alcohol and cocaine addiction, random sex and self harm before eventually coaxed into a come-back in the 80s.

The story begins after Dusty leaves The Springfields to move out of the shadow of singer/songwriter brother, Tom, and go solo. Tom doesn’t appear at all, but mother Kay pops up constantly like the spectre at the feast, played square-jawed, po-faced and cold by Roberta Taylor. Their dysfunctional relationship is excellently demonstrated when Dusty sings quiet snatches of The Windmills of Your Mind as her unlistening, unbending, unrelentingly critical, disapproving, negative mother talks on and on, as ever, about what a disappointment and failure her daughter is – unlike her son.

Further anguish stems from Dusty’s sexuality in an era when non-heterosexual inclinations had simply to be stifled or hidden, and her on-off relationship with black American singer, Lois, plays a central role, The Look of Love arranged as a duet between them. Joanna Francis is a strong, caring, realistic Lois, her solo of Little By Little well deserving special applause.

An impressively colourful, costume-changing, disco dancing ensemble and frequently changing set keep us constantly on the move as we travel from B&W geometric patterns of 5-4-3-2-1, Ready, Steady, Go and I Only Want To Be With You to recording studios, Piccadilly Circus, multiple world tour locations, a cruel deportation from South Africa when Dusty refused to play to segregated audiences, to bathrooms, homes and hotel rooms in the US and UK, even taking in a revolving wheel/knife-throwing variety act. The songs, arranged as solos, duets, trios or snatches, are shared amongst Dusty and the other characters as suits the story, with big Dusty performances reserved for a select few, ideal backing provided by a super combo of flute, brass, guitars, percussion and keyboards. 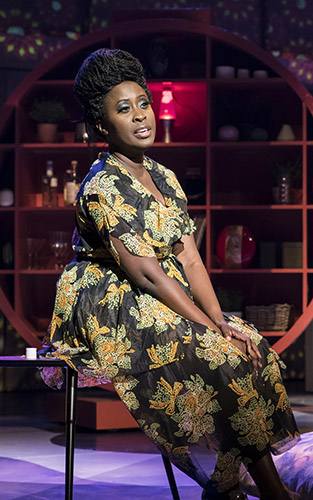 In spite of the story’s dark, tragic elements, especially in the second act, colour and glitz feature high, and comic touches are threaded through courtesy especially of assistant/friends Pat and Ruby (Esther Coles and Ella Kenion), Adam Bailey as Morgan Jones, and Rufus Hound as agent Billings and as Ray. The comedy, though often somewhat clonky and over-egged especially at the outset, does lighten the mood as required and is appreciated by the audience in general.

A lot is learnt in Dusty about Mary O’Brien’s struggles and demons, her highs and extreme lows, which draws us in from start to poignant finish. Tears are surely shed as, on her deathbed, Dusty quietly sings Going Back, a short tribute of funeral footage following. For the big finale, though, the girl in gold is back to dazzle in You Don’t Have To Say You Love Me, allowing everyone to join the celebration of the lasting achievements of Dusty Springfield OBE.