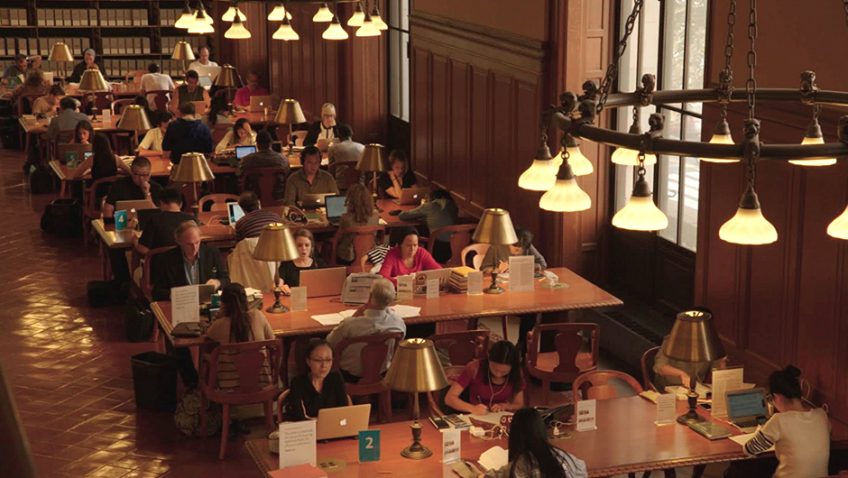 A heart-warming documentary takes the chill off New York City

is a long, but absorbing documentary by 87-year-old American filmmaker Frederick Wiseman. It is the kind of film that, while tinged with regret and concern, gives you hope for the human race. The library’s management team discuss a conundrum that has parallels in a cinema operator’s choice of what films to show. How can the library balance the demand for e-books and best sellers with its social commitment to stocking research books or intellectually challenging novels that might not be available anywhere else? True to his name, Wiseman has delivered a thought-provoking film about the value of knowledge that is never going to compete with blockbusters like the new Mission Impossible (also released this month). But running a public library in a huge, diverse metropolis is, if not a mission impossible, than very close – as is making a film about it.

Wiseman, who for 50 years has been taking us behind the scenes of international institutions in his unique style, much imitated style, is accustomed to it. His technique has not varied. There is no score, no narration, no expository captions and no overt evidence of the director’s presence. The film is made in the editing room and its story is told by the people who use and (or) work in the institutions; by the fascinating discussions, lectures, meetings and workshops and by the physicality of the building and its neighbourhood.

This visit begins at the elegant, monumental 1911 flagship library on Fifth Avenue at 42nd street, where we are thrown in medias res into a ‘Books at Noon’ lecture by ethnologist, evolutionary biologist and author Richard Dawkins. ‘The non-religious lobby is at least 20%; larger than any one religious sect.’ he argues. ‘Sensible religious people have no problem with evolution. We are privileged to live after Darwin, after Newton and after Einstein…’

Before leaving the Library’s hub, recognisable by its two enormous stone lions, Wiseman casts an eye on the role of the client-interfacing staff. A service-minded phone-librarian has been asked about the first recorded appearance of a unicorn (1225AD). Pressed for a detail he adds, ‘I’ll have to translate from the Middle English which I’m not so good at.’ He’s modest and does an impressive job.

Across the street from the main branch is the world’s largest free circulation picture file, designed to inform and inspire everyone from artists and set designers to advertisers. Opened in 1915 at the height of NYC’s immigration influx and organised by subject matter, we are shown the file ‘Dogs in action’ and asked to look at the different styles of photographs and images as well as the different dogs and actions. Andy Warhol, the Mexican muralist Diego Rivera and the reclusive Joseph Connell (the subject of an exhibition at the Royal Academy in 2015) all made use of this resource. Connell never left New York, but his ‘boxes’ are full of travel-inspired memories, some apparently borrowed from this very collection.

As we begin a tour of selected branches, establishing shots situate each building in the neighbourhood it serves. For some, books are not the main attraction, and we get a taste of the ways in which the Library fulfils its mission to be an all inclusive provider of knowledge. There are dance classes for the over 50s; and after-school tutoring for disadvantaged youngsters; a job fair in a Bronx library; a music recital (with not one young or white face in the crowd); computer classes for the city’s Asian population (and books in Chinese) and a demonstration of signing at theatrical events for deaf audiences in The Lincoln Center’s Library for the Performing Arts. There is also an active Braille and Talking Books Library.

Authors and other artists are evidently part of the library’s 55,000/year programmes. In addition to Dawkins’ appearance at Books at Noon, we are treated to an interview with Elvis Costello, a session with Patti Smith and a hilarious, eye-opening discourse on the history of the New York Delicatessen.

We pay more than one visit to the prestigious Schomburg Center for Research in Black Culture, which, in the year Wiseman was shooting, 2015, was the recipient of the National Medal for Museum and Library Service. This honour may well be due to its director since 2011, the engaging Dr. Khalil Gibran Muhammad.

Begun 92-years ago with the collections of the remarkable Arturo Alfonso Schomburg, the Center holds the world’s foremost collection of African-American culture and historical documents. After listening in on discussions about the cost of digitalizing the collections and improving the class divide through access to the internet, we are primed to look it up on our own computers to learn more.

Books are not entirely forgotten, although it appears that newly appointed architects have latched onto the ‘information store’ image of libraries as places where people can hang out. To counter this trend, Wiseman takes us into a book group and as the participants delve into an engrossing discussion of Love in the Time of Cholera

, you might find yourself reluctant to move on to the next stop – and( re-)read the novel.

Toward the end of the film, when the Library’s hands-on director, Anthony W. Marx, reflects on the need for light touch when it comes to rough sleepers, you might be reminded of the massive closure of libraries across the UK. Marx wants to make the public/private partnership (40% of funding is from private sources) the focus of management attention to maximize the ever-strained budget and ensure that no resident of New York City is left in the dark.