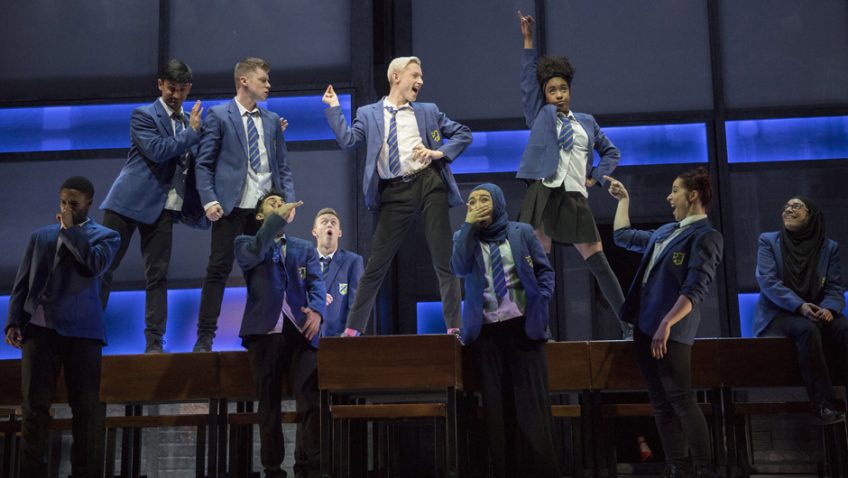 What did you want to be when you were a teenager?

You may have seen a BBC documentary in 2011 about Jamie Campbell, a 16-year-old boy, openly gay, who lived in a mining village in County Durham, and his ambition was to be a drag queen. The documentary was called Jamie Campbell Drag Queen at 16. Jonathan Butterell saw it and immediately wanted to turn it into a musical.

The music and orchestrations are by Dan Gillespie Sells, Frontman for The Feeling The book and lyrics are by Tom Macrae. Butterell, who also co-wrote the script, directs

The musical had its sell-out premiere earlier in the year at Sheffield’s Crucible Theatre. It had just four weeks rehearsal and only 19 performances.

The show is inspired by Jamie Campbell but is not about him. It’s about an invented Yorkshire lad called Jamie New.

The word drag queen will conjure up memories of other musicals. Everybody’s Talking About Jamie, however, is not Cage aux Folles, nor is it Priscilla Queen of the Desert and it’s not Kinky Boots, either. It’s much nearer to Billy Elliott, having the same sort of Northern working class background.

The script is about growing up and being true to yourself and finding your place in the world and hoping people will accept you for what you are without prejudice.

Jamie has to cope with an absent dad who thinks he is disgusting and doesn’t want anything to do with him. At school he has to deal with bullies and a career officer who thinks that the job which will suit him best would be a fork-lift truck-driver. John McCrea and Josie Walker in Everybody’s Talking About Jamie

Jamie is fortunate in his mum and his best friend, a Muslim girl. They both accept him for what he is and stand up for him.

John McCrea is Jamie, exuberant, confident, vulnerable, camp and tall; and when he puts on his scarlet-red high-heel shoes, he towers above everybody as he struts the stage. McCrea can act and sing and camp it up and he has the perfect leggy long legs for the role

The mother-son relationship is the show’s strongest suit. Josie Walker is Jamie’s single mum and she sings the hit song, the powerful and poignant “He’s My Boy”, a great number for all mothers.

Lucie Shorthouse in hijab is his Muslim girl friend and she has a song, It Means Beautiful, which she sings beautifully.

Phil Nichol shows us the bloke and then the drag queen; the transformation is so complete it is hard to believe it is the same person.

The dancers, who play the school kids, have lots of energy. The choreographer is Kate Prince, the artistic director of ZooNation Dance Company, and she has them jumping on and off desks and using their breakdance and hip-hop skills.

Everybody’s Talking About Jamie very sensibly from a box-office point of view, gives the audience the sentimental feel-good end the audience wants rather than the reality which nobody would want.