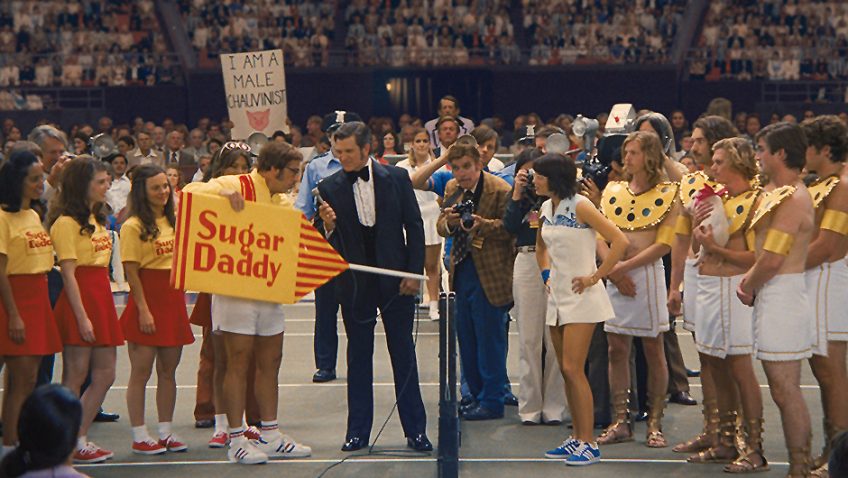 Jonathan Dayton and Valerie Faris, the California-born husband and wife team behind Little Miss Sunshine have come up with another entertaining crowd-pleaser in the true story of the 1973 tennis match between 29-year-old Billie Jean King (Emma Stone) and 55-year-old former Wimbledon Champion and World No. 1 Bobby Riggs (Steve Carell). This match was covered in the 2013 documentary The Battle of the Sexes but is it’s a great story that lends itself to dramatisation. You can tell by the title that the match was 50% pageantry and hyped entertainment and 50% tennis, but, it filled up the Houston Astrodome, attracted international media attention and reached an estimated 90 million television viewers. Baby boomers might recall the event, but it is relevant again today with the recent revelations of sexual impropriety and with the issue of equal pay in the office hitting the news.

In the tradition of all films about a pivotal competitive event, everything leads up to the match, and in Battle of the Sexes

, that takes quite some time. But that time is not wasted. We know, or can easily learn the results, but the background events, motivations, emotions and what was at stake are integral to our appreciation of the match itself and of the impact that it had for future generations.

Playing from a position of strength as World Number 1 or 2 (and backed by Virginia Slims sponsorship), King courageously threatens a walk out when Kramer plays hard ball, telling King and Heldman that the women’s game is inferior and women are ‘less resilient’. If your mind wanders to John McEnroe’s recent comments that Serena Williams would struggle to be in the top 700 on a men’s tour, welcome to a film that is as relevant as it would have been in 1973. When King follows through on her threat to defect, Kramer expels King and her followers from the Association. Emma Stone in Battle of the Sexes

If King became the first woman athlete to earn over $100,000 in prize money, she was still earning less than women until the US Open in 1973 offered equal prize money. This is the year King became the first President of the Women’s Players Union – the Women’s Tennis Association. And while many women players supported King’s campaigning efforts, Chris Evert, Virginia Wade and Margaret Court among others snubbed King accusing her of playing for money and not for love of the game. These divisions are sidelined in the film which streamlines the issue into a macho – feminist battle, with ‘I’m going to put the show back in chauvinist’ Bobby Riggs and Jack Kramer vs. Billie Jean King.

On the Virginia Slims Tour there is a spark of recognition and attraction between King and her tour hairdresser, Marilyn Barnett (an inspired Andrea Riseborough), and the more experienced Barnett encourages King to explore her repressed sexual feelings. The film sensitively chronicles the frustrations of their motel love affair as King, who had been married to college sweetheart Larry King for eight years, worries about her reputation and that of the Women’s game should the couple be found out.

The former number 1 seeded player (in 1941, 1946 and 1947) Bobby Riggs (Steve Carell with false teeth and Riggs’s hairdo and glasses) is bored with his life out of the limelight. He needs an ego-boost, not to mention money to pay his gambling debts. Carell is hilarious in his depiction of Riggs developing his idea for a big, televised, male-female tennis match with big prize money and preparing for it. He attracts sponsors and media with his clownish antics and comments, ‘I love women – in the bedroom and in the bathroom’ and ‘I’m not saying women shouldn’t be on the court. Who would pick up the balls?’ Steve Carell in Battle of the Sexes

Carell plays Riggs’s with more depth and nuance than we expect and it pays off by making him a more sympathetic, intelligent and real character. In the scenes between Riggs and his wealthy wife, Priscilla Wheelan (a welcome return to our screens from Elizabeth Shue), it is clear that their marriage is being undermined by his low self-esteem. Riggs who is supported by his wife and is working in a desk job for her father, has to live with the truth that he is a hypocrite. He is playing the chauvinist when he is a kept man. Billie Jean King can support herself while he cannot. Priscilla loves Riggs’s childish spirit (most evident when he is playing with their son) but his gambling addiction is destroying their marriage.

In 1972, Billy Jean King, 28 and at her height, was number 1 in women’s tennis as her arch rival, Margaret Court, was absent due to childbirth. In 1973 Court returned and became number 1. Ignoring King’s pleas and warnings not to give in to Riggs’s stunt, Court accepts Riggs’s challenge and loses. Although King is exhausted from a busy, stellar year that is not over, she has no choice but to correct the perception that women players are inferior.

You might think that Yorkshire script writer Simon Beaufoy (best known for his triumph-of-the-underdog scripts, Slumdog Millionaire and The Full Monty) had fun dreaming up tennis officials’ outrageous sexist attitudes before and during the match and Riggs’s slurs, but most of them are on record.

The talented Ms Stone (La La Land, Birdman) is convincing as King (credited as an advisor on the film) although she is a lot thinner than King and her good looks cannot be disguised behind the thick glasses and hairdo. She injects vulnerability her character as she deals with the pressure of the game and timidly explores her feelings for Barnett, while putting them on hold for her career. It would be over a decade before King comes out and divorces King. A minor quip is that attorney Larry King’s (Austin Stowell) considerable contribution to the breakaway Women’s Pro Tour and to his then-wife’s career is given short shrift. But this film is a chance for the women to come up aces.