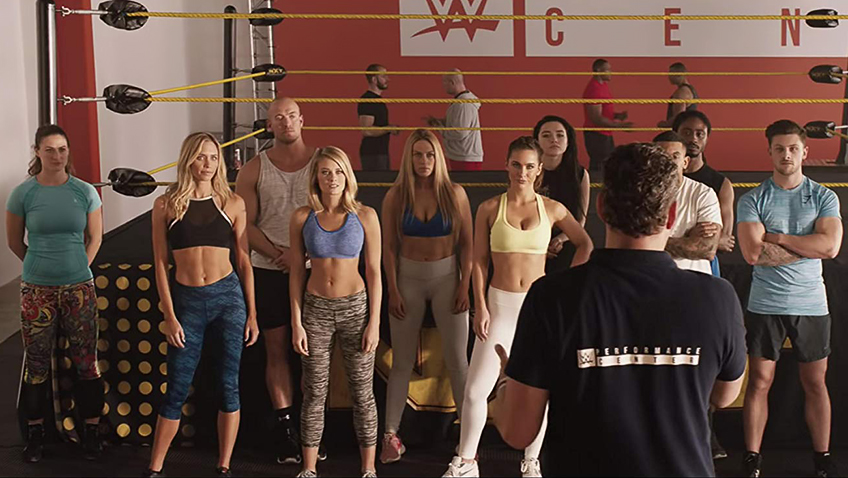 The title is designed to emphasise that this is a true story told from the point of view of arguably the most successful member of a Norwich, England family to make it in American wrestling. The family is claimed by Saraya Jade Bevis, otherwise known in the world of WWE (World Wrestling Entertainment) as Paige. The ‘Extras’ actor and co-writer Stephen Merchant dawns his executive producer/writer/director cap to deliver an entertaining, ‘feel-good’ film, while the terrific cast make up for certain contrivances and a weaker second half.

In 2000, in a well-lived-in living room in Norwich, a young boy, Zak Knight (Thomas Whilley), is watching professional wrestling on television. When his younger sister, Saraya (Tori Ellen Ross), comes into the room to watch Charmed, the two siblings start to fight. Hearing the noise, dad (Nick Frost) and then mum, (Lena Headey) enter the fray; not, as you we expect, to break up the fight but to correct the children’s technique and advise on strategic moves.

The parents, former wrestlers Ricky Knight and Julia, supplement their income from a bar they run by training wrestlers. As their children grow older, Ricky and Julia enlist them (another son is in prison) to help out at the school while competing.

Fast forward in time and Zak (Jack Lowden) is wowing local audiences as Zak Zodiac while 18-year-old Saraya is fighting under the name Britani Knight (Florence Pugh). Britani and her brother can fight one another as they have various routines worked out in advance. To be in the WWE you must not only know how to wrestle, but how to make the wrestling look far more dangerous that it is intended to be. 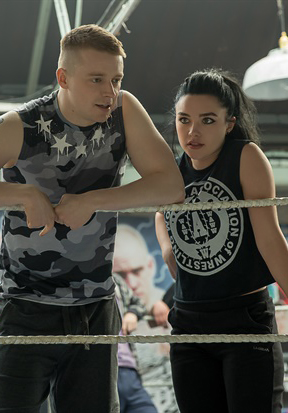 Jack Lowden and Florence Pugh in Fighting with My Family

Ricky and Julia have been phoning Hutch Morgan (Vince Vaughn), the recruiter/trainer for the WWE, for years, and are finally rewarded when Morgan invites Zak and Britani down to the UK tryouts at the O2 arena. The siblings bump into Dwayne Johnson (playing himself), but his star billing is misleading, as he’s in the film less than ten minutes. Morgan tells Britani that she has to change her ring name as they have a Britani, and she changes it to Paige, after a character in Charmed. Zak and Paige are both shocked when only Paige is accepted for the developmental (NXT) circuit in Florida. Paige’s pleas for Zak fall on deaf ears.

Dejected and depressed, Zak has no choice but to return to the independent circuit and train youngsters at his parents wrestling club, while dealing with the news that his pretty girlfriend is pregnant. As a meet-the-in-laws dinner (the Knights serve Chinese takeaway) reveals, Zak is marrying up a social notch and his in-laws react to the freak show on display. The scene is written and played for laughs.

Paige’s dream may have come true, but she is not happy either. When surrounded by the tall, shapely former models that are her colleagues, she seems to have a crisis of confidence and turns defensive and unfriendly. Paige undergoes the gruelling training, but struggles physically and mentally to make the grade. 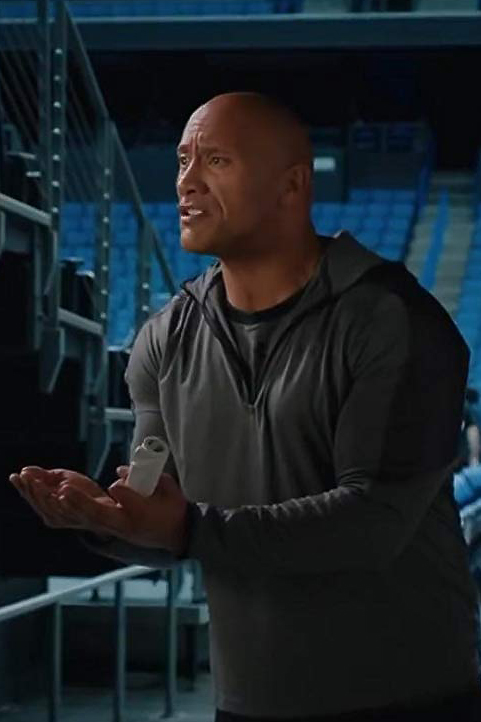 Dwayne Johnson in Fighting with My Family

This entire segment is designed to bring Paige as low as possible in order to turn the story into an underdog-triumphs story at the end. We can buy it to a degree but the segment goes on too long and grows a bit artificial. You wonder why Paige would do worse in the endurance challenges than the bimbo models she criticises. And, even taking into account her young age, home sickness and insecurity, you also wonder why she seems incapable of making friends or acting pleasant.

Needless to say, after soul searching back in Norwich, both siblings accept their respective destiny with a new resolve. Paige reminds Zak of all he is doing in keeping potential drug dealers off the streets and training a blind kid – this is a true story – to wrestle, and how lucky he is to have an adoring wife and baby.

Paige’s rise to fame is condensed in the film, to put it mildly, which is a sound use of dramatic license. Why we care about this girl from Norwich at all (what follows might be a spoiler) is that, at 21, Paige becomes the youngest WWE Divas Champion in history and also the only woman to win the title in her debut. So we naturally want to get to that point in the film. The problem is the lack of build-up. The filmmakers do not set up the championship within the context of the WWE’s complicated fight structure so we cannot appreciate how Paige was catapulted to the position of fighting a title champion. Her Divas debut happens so implausibly that we cannot fully appreciate the occasion.

There is a tale-of-two-countries look and feel to the film that is almost disorientating. At times you feel like you are watching two different films, a sentiment that reflects how Paige might have felt leaving rainy, grey Norwich for the bright beaches and art deco streets of Miami. Nick Frost and Lena Headey could only fit in to the Norwich part of the film, where they reign supreme. They are a great pair, and look the parts, but they are also part of a Nick Frost movie (Shaun of the Dead, Hot Fuzz, Cuban Fury). By contrast, when Paige goes to America, the tone becomes serious, the training and hotels less grainy, and the décor is much brighter and more American. 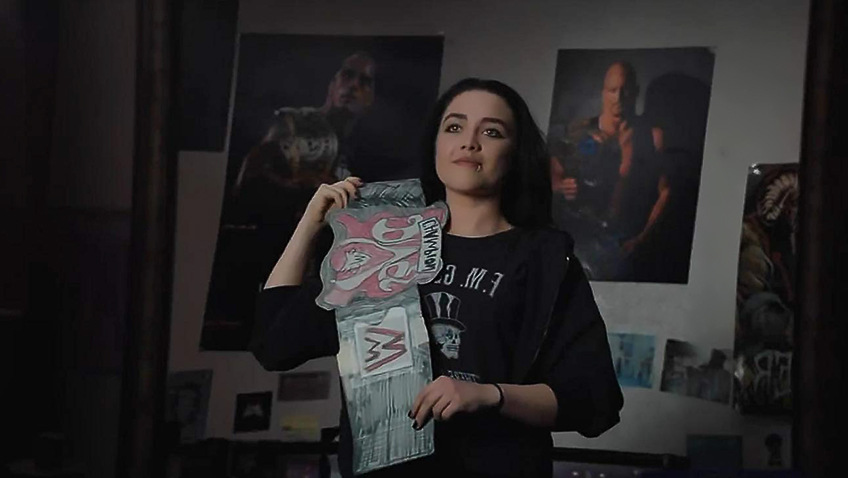 Florence Pugh in Fighting with My Family

In America, Paige is alone, but England represents home, and it is crowded with friends and family, including Zak. Jack Lowden has the most difficult role, as he is the guy who is left behind to stew in his self-pity until he accepts his fate. That Lowden makes Zak such a sympathetic and credible character is not surprising for one of the UK’s best, and most charismatic, young actors. He was magnetic in Tommy’s Honour and his role as Lord Darnley was arguably the best thing about the recent Mary Queen of Scots. He was the RAF pilot shot down in Dunkirk and made an equal impression on the small screen as Nikolai Rostov in War & Peace.

No one who saw Florence Pugh in Lady Macbeth will forget her breakthrough film. Here she is equally striking and charismatic and almost as convincing as Lowden. You cannot fake WWE wrestling completely. It is clear that Pugh has had some training and she even looks like she is enjoying throwing herself on top of a real wrestler, or just the fall girl. While Pugh is made up to look like the real Paige and shares her colouring and several of her facial features, the comparisons do not extend to the fighter’s physical attributes. Pugh does not have an athlete’s body, or a body that resembles the real Paige’s. It is impossible to believe that this Paige has been training since the age of thirteen and wows the demanding WWE crowds.