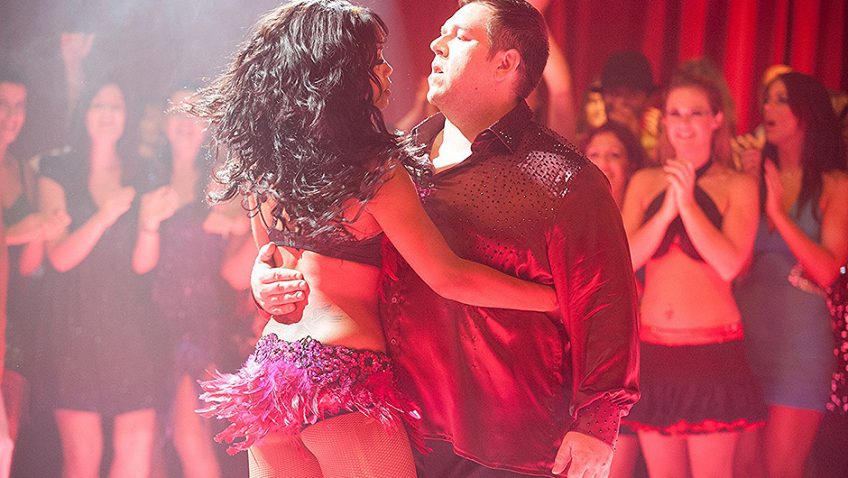 Many of us have been brought up to believe that is not polite to laugh at a fat man trying to dance, but that is what Nick Frost wants us to do in Cuban Fury

The film is based on Mr Frost’s original idea, pitched via an email sent when he was a bit tipsy. We’ve also been warned about that.  Mr Frost, who is both Executive Producer and the film’s star, has somehow convinced public sector financiers The British Film Institute and Film 4 that the idea is not only original, but good. From the first frame, however, the audience might feel otherwise.

Bruce Garrett (Frost), 41, unmarried, overweight and friendless (or so it seems) has a good job, but a dull life.  In fact, life ended for him at age 13, when he and his sister were poised to win the Junior Salsa Championships.  On the way to the competition, Bruce was mugged by a group of bullies. Billy Elliot rose above the insults and bullying, but Bruce never recovered. He never showed up at the competition, never explained himself and never danced again. His devoted mentor, Ron (Ian McShane), who, 25 years on, still runs a Salsa school in his bar, has never forgiven Bruce.

When Bruce sets eyes on his new America boss, Julia (Rashida Jones), he finds a reason to emerge from 25 years of self-pity.  Bruce feels he has a chance when he discovers that Julia is a pretty good salsa dancer.  If that coincidence weren’t enough, she is also unmarried and unattached as is Bruce’s colleague at work and rival, Drew (Chris O’Dowd). As coincidence would have it, Drew is also a passable salsa dancer.  Drew will do anything to thwart Bruce’s chances with Julia, but he isn’t counting on Bruce’s secret weapon.  Bruce is, but can he revive what has been buried for 25 years?

This flimsy, predictable, and clichéd story is probably not a good one to entrust to a first time feature writer (Jon Brown) and a first time feature director (James Griffiths), both coming from a television background.  With the exception of Dick Pope’s reliable cinematography, this would have television written all over it, the Strictly Come Dancing, variety.

But television drama has evolved, and the scripts are usually more sophisticated than what we get here.  Are we really expected to believe that Frost and his sister (Olivia Colman) would enter a salsa competition with almost no rehearsal?  And are we really expected to believe that Julia would fall for Bruce simply because he loves to salsa?  It’s hard to make a film where Chris O’Dowd (Bridesmaids) cannot be sexy or funny at least once, but the filmmakers have succeeded.  The celebrated actress Olivia Colman is given an under-written thankless part, and Rory Kinnear is also wasted.

For the film itself to stand any chance of winning, Frost should be able to amaze us with his grace and rhythm, but sadly, he cannot.  Movies such as this usually end in a blaze of terrific choreography that offers some reward for the insipid script, but not this one. The dancing, which is surprisingly minimal, is shot at angles that hide the ugly truth.