Home / LIFESTYLE / REVIEWS > / FILM REVIEWS / Despite the star power, there are no sparks in The Huntsman 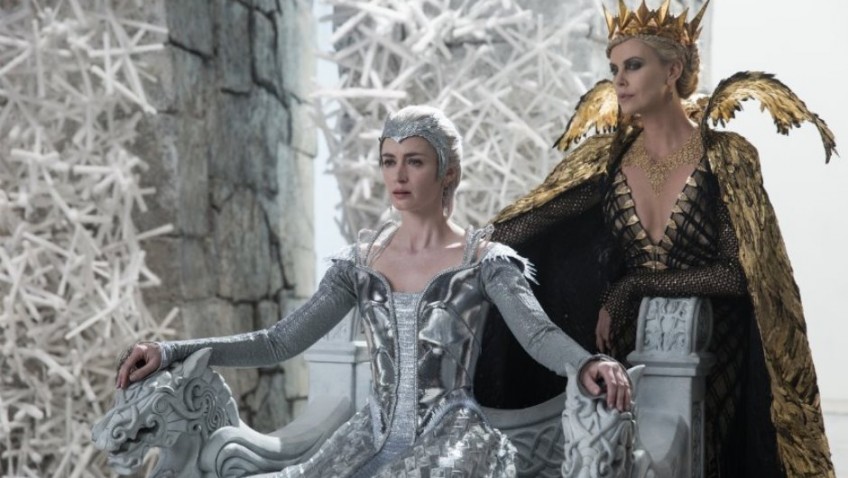 Despite the star power, there are no sparks in The Huntsman

The Huntsman: Winter’s War is directed by , a 47-year-old Frenchman who, relatively late in life, was given the opportunity to direct his first film: a big-budget all-star cast prequel-turned-sequel to the blockbuster Snow White and the Huntsman  It’s a shame therefore, that this is not a success story for late starters.

In fairness, the direction is not the main problem.  The script, by the story’s creator, Evan Spiliotopoulos (Hercules, Young Sherlock Holmes) and Craig Mazin, (who wrote the dire Hangover II and Identify Thief),  is a confusing compendium of folk or fairy tales which cannot find its dramatic focus and misses the real story.

Your heart sinks when a narrator is enlisted to help sort out the mess, but fails to do so. Most of the characters come from the Grimm brothers’ fairy tale Snow White, but Snow White herself is conspicuously absent from the film.  We do get two of the dwarves from that story: Nion (Nick Frost, returning from ‘Snowhite and the Huntsman) and his colleague, Welshman Gryff (Rob Brydon). They strain to provide the much-needed comic relief until a pair of ‘she-dwarves’ come along. They are the docile Doreena (Alexandra Roach) and Bromwyn (a show-stealing Sheridan Smith) who could eat the he-dwarves – and Eric – for breakfast.  Their rapid-fire banter (which is partly responsible for the 12A rating) is the highlight of the movie.

The other characters come from Hans Christian Anderson, whose story, The Snow Queen, is similarly de- and re-constructed. All the millions of children who turned the film Frozen into a merchandisers’ gold mine, will be bemused to find that both Queen Ravenna (Charlize Theron) and her betrayed sister Freya (Emily Blunt) are evil tyrants who do not sing.  There is an explanation for Freya’s transformation. After the jealous, paranoid Queen Ravenna usurps the throne through deceit, she is furious to discover that Freya is pregnant with her illicit lover’s child.  Ravenna uses her magical power of manipulation to exact a terrible revenge.

When Freya hardens her heart to love to avoid being hurt again, she discovers a hidden power to turn everything and everyone into ice.  Freya establishes a kingdom of Ice and, to guard her, builds an army of Huntsmen who are forbidden to fall in love.  Long before Uganda’s Lord’s Resistance Army or the Liberation Tigers of Tamil Eelam abducted and trained child soldiers, Freya peoples her kingdom with children who are given a training regime similar to that of Uma Thurman in Kill Bill.

Two children grow up to be the best fighters: the eponymous Huntsman, Eric (Chris Hemsworth, returning from ‘Snow White’) and Huntswoman Sara, (Jessica Chastain) who, like Katniss Everdeen, is an ace archer with the refrain ‘I never miss.’

Naturally, as they grow into two gorgeous thirty-somethings, they can’t keep their hands off one another. They even marry, which is surprisingly as there is little chemistry between them.  Freya’s spying owl finally catches them in the act (they must have escaped detection for over a decade, which is pretty good).

The punishment is swift and brutal. The Huntsman is beaten and thrown, unconscious into a freezing river, presumed dead.  Clearly, Freya has not seen The Revenant in which, against all odds, a much weaker man improbably survives the freezing rapids.  Seven years pass, although we have no idea what Eric has been doing during all those years. He believes that Sara is dead, but, we later learn in a line of dialogue, that was Freya tricked him into seeing her die, just as Sarah has been tricked into believing that Eric abandoned her to her fate, contrary to their vows.

As Sara is despatched to kill Eric by subterfuge, he is drawn into a race against the clock to find the Mirror (which is sitting in a Goblin’s lair along with other stolen riches) and keep it out of Ravenna’s hands.

The entire middle section of the film, which seems to take place post Snow White, involves Eric’s journey to find the Mirror. He is eventually joined by Sara so that the two can play kiss and make up. Unlike Snow White and the Huntsman, here the Huntsman is the central character. That’s a big mistake, not only because he is a dull character with little personality, but also because the real story must surely be the mother/daughter-she-never-had relationship between Frey and Sara.   Otherwise what is the point of Freya’s hardening her heart after the loss of her real daughter, and of forbidding her ‘children’ to love?  Freya’s salvation (and the moral of the story) is the rediscovery of her capacity for love.  Admittedly, it would require a slight suspension of belief for this story line to develop given that Jessica Chastain, who at 39 is rather old for the role, is actually six years older than her surrogate mother, Emily Blunt.

In the long, final segment the story shifts focus once again. The battle between the two sisters takes centre stage with all the CGI Nicolas-Troyan can muster. And that’s a lot as Nicolas-Troyan was nominated for an Oscar for the Special Effects on Snow White and the Huntsman.

Nicolas-Troyan does his best to bury the unprepossessing story under millions of dollars in over-the-top costumes and over-embellished sets. They do succeed in distinguishing between the two kingdoms, and  imbue the Goblin’s forest, a tavern in the woods, and many other locations, with a distinct visual appearance and atmosphere.  When Freya comes riding into the forest on a huge white bear, you think of The Lion, the Witch and The Wardrobe and wait for him to say something.