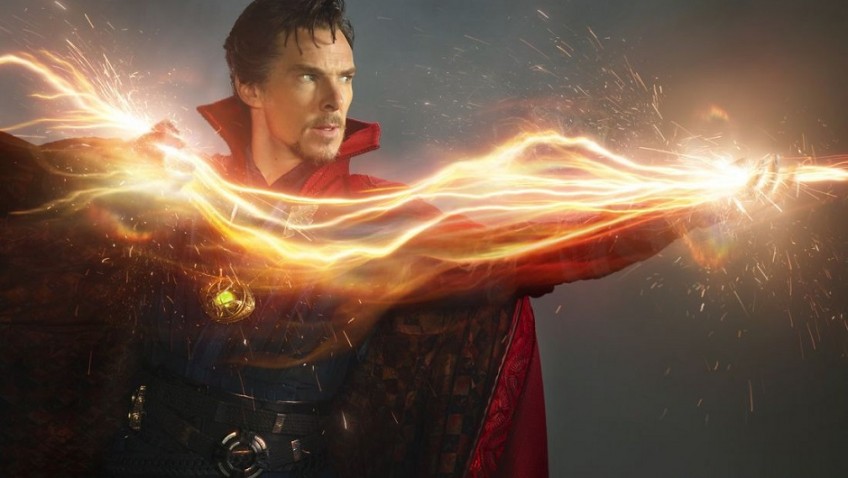 This starry comic adaptation is less strange than tedious

You might think that serving Bellinis and caviar in the cafeteria of a Marvel Comic Book convention would be a waste, but casting 40-year-old ‘Hamlet’ star Benedict Cumberbatch in Marvel Comic’s new blockbuster, Dr Strange, is more fitting than might appear.

Like Cumberbatch, the neurosurgeon Dr Stephen Strange is a witty, handsome, articulate, sports-car driving, super-star, sought after by those in need of his unique skills.  In the case of Cumberbatch, ‘those in need’ are more likely to be fans, directors and producers than patients with challenging neurological problems.

The less attractive adjuncts to success and fame are arrogance and a sense of superiority and Cumberbatch has fun balancing his character’s charismatic appeal with his obnoxiousness.  Even after Dr Strange’s ‘accident’, his long-suffering girl-friend, fellow doctor Christine Palmer (Rachel McAdams), whose character is a departure from the comics, is nastily dismissed when Dr Strange interprets her caring for pity.  And that accident itself is the act of a narcissist who consults his phone in his car while negotiating a twisting, canyon road at night, with no regard for oncoming drivers.  Fortunately for Dr Strange’s ego, not a trace of his horrific accident remains – except for his scarred hands that tremble when holding a scalpel. When wallowing in self-pity and searching for nonexistent medical cures deplete the Dr’s bank account, he learns about Jonathan Pangborn (Benjamin Bratt), a patient so mangled after his accident that even Dr Strange deemed him hopeless.  Although left a paraplegic, Pangborn is playing basketball when Dr Strange approaches. He speaks of a mind cure and refers Dr Strange to Kamar-Taj in Kathmandu.  ‘But the price is high,’ he tells the wealthy doctor, ‘and I’m not talking about money.’

Off goes the Doctor to Nepal, a place more familiar to Cumberbatch than to Dr Strange, as the actor lived there for a while teaching in a monastery.  Crime is not restricted to New York or London, and Dr Strange is saved from muggers by a hooded presence that turns out to be Karl Mordo (a miscast  Chiwtel Ejiofor)  who, then takes the stranger to meet the Ancient One (Tilda Swinton).

If Mordo is a composite character from the comics, the decision to make the old Tibetan monk an androgynous woman of a very uncertain age is only a reminder of the lack of women in the film.  While Christine Palmer is a doctor, not a housewife, her role is to be on call in the operating theatre whenever Dr Strange returns to Earth from his far-flung business trips to the Astral, Mirror and Dark Dimensions somewhere behind the time-space continuum.

Dr Strange’s resistance to the idea that the spirit, rather than his nimble fingers and medical science, can cure him is not an unexpected reaction, but Dr Strange’s stubbornness begins to annoy the Ancient One.  When he turns bombastic after realising that he has spent his last dime on a crank cure involving dope-head talk of astral planes, he is thrown out, but readmitted after small show of humility. The swanky compound, looking like a private-members’ club designed by Edwin Lutyens is a tad less minimalist than Dr Strange’s penthouse bachelor pad, and what it lacks in views, it makes up for in magical portals to other worlds. There is also a well-stocked library (no Kindles here) guarded over by tea-making Wong (Benedict Wong), after a defector named Kaecilius (Mads Mikkelsen), tore out key pages from an advanced book on Time.  While Dr Strange (he refuses the title Master) is programmed to believe Kaecilius is the enemy for going over to the Dark Side, it seems that the Ancient One, deprived of Botox, might be borrowing more from the Dark Side than she would let on, much too self-righteous Mordo’s growing anger.

They say the bigger the sceptic the more diligent the convert.  Whether or not Dr Strange learns the lesson that ‘it isn’t about you,’ or simply shifts his modus operandi from surgery to sorcery, is a mute point. Whatever your view, he is soon outdoing his teachers:  walking around with the Eye of Agamotto (an amulet against evil magic) and a red levitating cloak that brings us straight into Harry Potter territory.

For Dr Strange is a combination of the Harry Potter series and Chris Nolan’s Inception, both in terms of magic and time-travel and the impressive special effects. These include, but surpass, the crumbling, metamorphosed buildings and wall- walking in Inception and the talismans of Potter’s sorcery. Those who found Inception a boring experience, might feel the same about Dr Strange, while those who endured Harry Potter for the unknown actors playing childhood friends will soon realise that something is lost when their average age is 45 and they are definitely not doing the stunts.  Aside from Dr Strange, the characters are devoid of personality, and no one eats, drinks or has any fun, despite the odd humorous remark.

Dr Stephen Strange first made his appearance in Strange Tales no. 110 of July 1963, when you might have been listening to The Freewheelin’ Bob Dylan album or buying a ticket to Cliff Richard’s Summer Holiday. Dr Strange stood out from other comics due to creator Steve Ditko’s introduction of Eastern mysticism, black magic and a mind-boggling psychedelic cosmos with portals into alternative dimensions that predated the Beatles Magic Mystery Tour by four years.

Dr Strange was first made into a movie in 1978, but it was nothing like this one, which takes full advantage of computerised special-effects, combining kaleidoscopes of psychedelia with surrealism like a long LSD trip. Spectacular as they are, they do not stimulate our imaginations but reduce us to onlookers. For while these visuals respect the source-material, like someone else’s LSD trip, they grow as tiresome on screen as does the endless fighting in which no one is wounded or hurt.

Suspense is defined as a feeling of anxiety about what might happen, but when you don’t know the rules or the boundaries, you cannot anticipate the worst or even the consequences of the action. Films without suspense and some ground-rules to connect the action with our frames of reference are rarely engrossing, but the cheers from the audience around me at a ‘fan’ screening suggested otherwise.

Writer/Director Scott Derickson is a 39-year-old American filmmaker with the right mix of special effects action films and nail-biting horror movies under his belt to qualify him for the job, although none of his films have met with critical acclaim.  Now all that, and his standing in the Hollywood ‘A’ list, looks set to change.  There is Dr Strange mania in the air and the end-credit teasers point to at least one sequel in the pipeline.