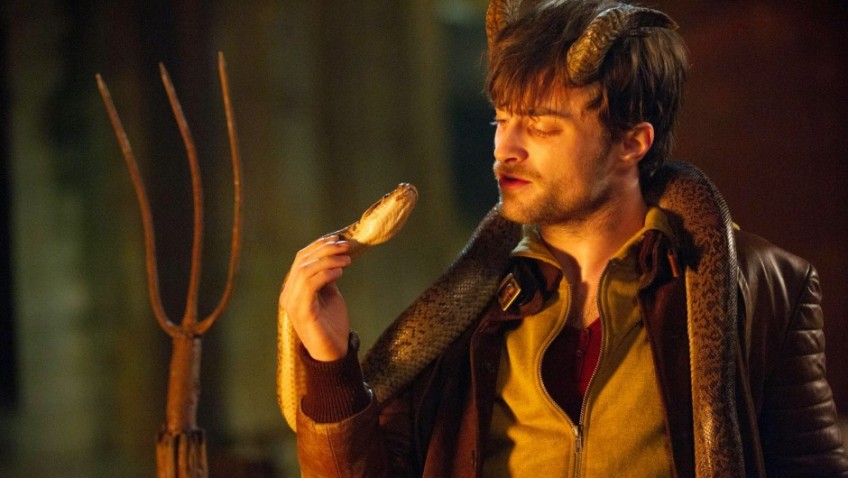 You will not find Horns boring – starring Daniel Radcliffe

If you are between the ages of 15 and 30 or are a big Daniel Radcliffe fan, Horns might be an exciting prospect.  It’s one of those maudlin, romantic films about doomed lovers that teens relish. Moreover, it has enough of the supernatural in it to remind you of the Twilight series, which also takes place in the Pacific Northwest (though Horns was shot in Vancouver).

The religious allegory is another matter, and the target audience might not realise that, with the Devil and his snakes, this rural setting represents Paradise Lost. Writer/Director Alexandre Aja mixes genres like he mixes allegories and not altogether successfully.

It’s hard enough to pull off a supernatural black comedy without transforming it midstream into a religious satire, a ‘who-done-it’ and then a horror film with a downright ludicrous religious motif.

Ignatius (Ig) Perrish (drop the second ‘r’ for your first clue) is a twenty-something middle-class man whose childhood sweetheart, Merrin (Juno Temple) vows, significantly, to love Ig for as long as ‘she’ lives, which sounds as ominous as it proves to be.

On the night Ig proposes, Merrin is brutally murdered near the tree house where the two used to meet. His best friend, Lee (Max Minghella), a state defence lawyer, gets Ig off the murder charge, but everyone in the town, even his supportive parents, believe he is guilty.  Lying witnesses, including his brother Terry (Joe Anderson) who has taken to drugs and a publicity-hungry waitress have not helped his case.

When Ig is sacked from his radio station job, he hits the bottle.  In a first person narration he tells us, ‘But even the devil was a fallen angel and sometimes the only way out of hell is to walk deeper into it.’  In other words, Ig follows in the footsteps of dozens of wronged innocents like Harrison Ford’s Fugitive, and sets about to clear his name.

Since everyone believes he is evil, Ig grows a set of horns. ‘When they looked at me, they saw the devil,’ he narrates, ‘and now I had to look the part.’ It is odd that he says this before knowing the powers the horns would give him, and despite having rushed to the doctor to have those very horns removed.

More inconsistencies are to follow when Aja plays the Horns for laughs. Seeing the horns causes the townspeople to reveal their real thoughts, in the mode of the comedy, Liar, Liar.  Ig’s doctor’s thoughts are repugnant and are played for laughs, but the confessions turn dark and serious when it comes to his parents.

His mother disowns him and his father admits to being jealous of Ig’s love for a hot young woman.  Whatever you think of Horns, you will not find it boring.

The story then transforms into a ‘who dun it’ as our Devil, who loses his horns for a while (easy come, easy go), interviews the so-called witnesses and tracks down the real culprit.  Here the plot thickens some more as it turns out that Ig is not the only boy in town who desires Merrin.

The story then mutates into a horror and revenge film (imagine a snake crawling inside the villain’s mouth and suffocating him) with the Garden of Eden allegory returning with Ig, as Adam, now a fiery fiend, straight out of William Blake.

This is odd, as by now we know that Ig is not the Devil or a monster. Still, I am willing to concede that there might be a blatantly obvious method to Aja’s madness for those willing to think about it.