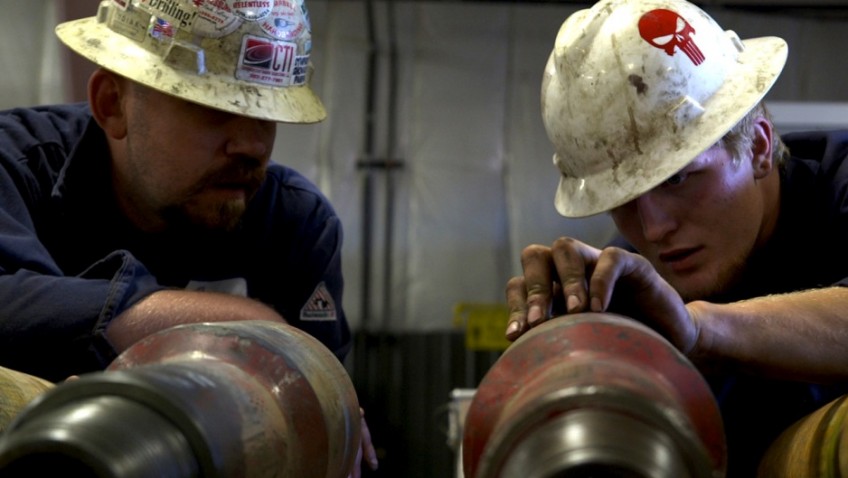 The niche distribution company Dogwoof celebrates ten years of great documentaries with The Overnighters, filmmaker Jesse Moss’s dark and troubling film about self-invention, second chances and the American dream, seen through the eyes of a pastor in a North Dakota boomtown.

Fracking has created a boomtown in Williston, North Dakota. Just as gold in California and oil in Texas and then Alaska attracted the ambitious, the unemployed and the dispossessed from all over the USA and beyond, so fracking for shale gas has lured thousands of jobseekers to Williston, a town that lacks the housing and resources to accommodate them.

Men of all ages (older men are unlikely to be hired) leave families, dead-end jobs, criminal records, drug habits and other baggage behind to start life afresh with the promise of good wages for hard, manual work. Some plan to bring their families over later, although many marriages that survive the separation do not survive the reunion in this boring small wasteland.

Jobseekers need an address to put on their applications. Even for those who could afford a hotel find that they are booked solid by the oil companies. For those who land a job, finding a home is another matte.  With house prices rising; limited camping space and the Council pressing for a ban on people living in caravans for more than 28 days; where do all the newcomers live?

The answer for most of film is at the Concordia Lutheran Church, run by Pastor Jay Reinke. An energetic, friendly man with silver hair, Reinke juggles caring for the needy newcomers with his ministry over an increasingly hostile congregation and the well-being of his wife and three children.

Those strangers beating a path to his door are called ‘Overnighters,’ although it is no secret that, for insurance and Health and Safety reason alone, they are not authorised to sleep in the Church.

The new arrivals are asked to sign a form promising to adhere to the rules and attend Church on Sunday in exchange for some floor space or a pew and use of the toilets for a week or more.  Those with cars must sleep in the car-park (which is also frowned upon), while a select few redeemable sinners are invited to the Pastor’s house.

Tensions rise between the various flocks that compete for Pastor Reinke’s attention and tear at his conscience.  The congregation complain about the smell, the mess, and unchristian conduct of the strangers, while Reinke’s supportive family put up with registered sex offenders sleeping in their basement.

Reinke responds that everyone needs, and can change with love, support and charity. Meanwhile, Reinke points out at Town Council meetings that it is not only inhospitable, but irrational to deny accommodation to workers on whom the town’s prosperity  depends.

All of this is captured in an intimate, fly-on-the-wall manner by Moss, who not only directed the film and wrote the scripted portions, but operated the camera and slept in the Church, effectively becoming an Overnighter.

It is this long-term immersion in the Overnighter community and in the town that resulted in Moss bearing witness to the changes in Pastor Reinke himself, as the juggling act that he has managed so diligently spirals out of control.

Reinke’s faith in man’s ability to be rehabilitated is not paying dividends.  First one, and then another of Reinke’s lost souls turn against him, while another turns out to be hiding a darker criminal past than he let on.

The brilliance of this film is how Moss causes us to question our own attitude to strangers and re-evaluate the characters we meet as we continually change our perceptions.

A straightforward documentary about a man of God helping the needy in a conservative boomtown gradually becomes an open-ended long, dark night of the soul.