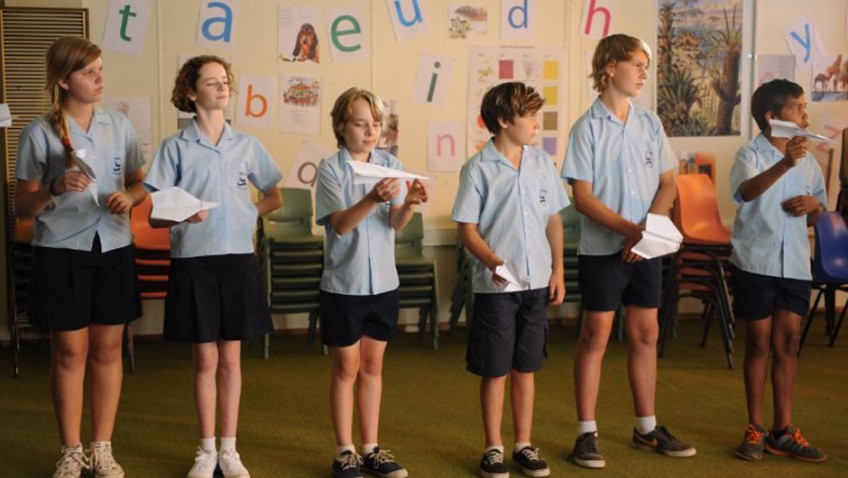 While it’s a fair bet that most 12-year-old boys in the UK are more interested in their Xbox 360s and PS3s, than in throwing paper planes, who couldn’t get sucked into an open competition that offered the chance for fame, a trip to Tokyo and the pride of a grief-stricken widower dad?

The boy is Dylan Webber (Ed Oxenbould, The Visit); the dad is Jack Webber (action-hero-hunk Sam Worthington: Clash of the Titans, Avatar), and the Director is Robert Connolly (The Boys, Balibo) making this an All-Australian affair that nonetheless offers universal themes and potential universal appeal.

After all, there are no borders when it comes to grief, the loss of a spouse and parent, and the coming-of-age process and Connolly, who co-wrote the script with Steve Worland, hardly disguises his intention to stage one helluva tearful climax. Dylan is a saintly boy, suffering himself, but forced to play the father to his dad who has not worked since the death of his wife in a car crash five months earlier.  When he isn’t sleeping, Dad is lounging around on the couch of their run-down bungalow, watching other men play football and wallowing in home movies of his attractive wife, sometimes with baby Dylan, on the beach.

The opportunity to enter a paper plane competition provides Dylan with a distraction, but dad cannot summon up any interest. Thankfully, almost everyone else can.

Dylan has the support of his teachers; a chubby, heart-of-gold school mate (Julian Dennison); the whole town and old Grandpa Webber (Terry Norris) who helps raise funds for Dylan’s flight to Tokyo with yummy baked goods sold by his lady-friends from his care home.  Dylan’s positive, fair-minded attitude even puts the inevitable competition bully, Jason (Nicholas Bakopoulos-Cooke) to shame.

Paper Planes will appeal to many children between 7 and 14, but even they might notice how formulaic and clichéd it is.  Moreover, teenagers and adults  who saw the film X + Y (released in the USA as Beautiful Young Minds) earlier this year will notice how closely Paper Planes resembles that film. In X + Y, an autistic boy, also in a single parent household, travels to Taiwan for a international math’s competition and, like Dylan, faces all sorts of obstacles.  While the X + Y boy befriends a pretty Chinese maths’ prodigy, so Dylan befriends a pretty Japanese girl paper-plane champion.

Will Dylan win against the determined and well-placed Jason?  Can Dad bring himself to sell his wife’s piano to buy a plane ticket to Tokyo and watch his son compete?   Even if you are inclined to stick around to find out, the onslaught of sentimentality toward the end might have you reaching for an airsickness bag before Dylan’s glider lands.