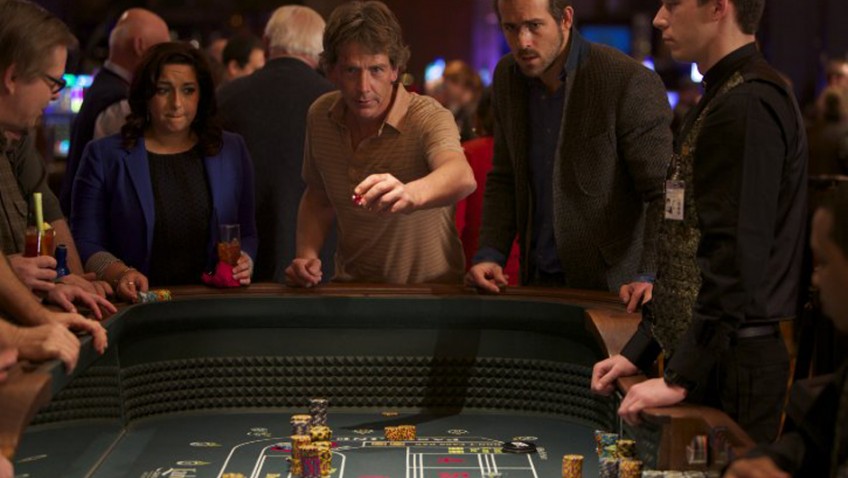 Two mismatched, compulsive gamblers in search of a pot of gold

From to Paul Newman and George C Scott in the Hustler and Newman and Robert Shaw in The Sting; to Mickey Rourke and Eric Roberts in the Pope of Greenwich Village; and to Robert De Niro and Joe Pesci in Casino, buddy gambler films merge with loner gambler films such as Karel Reisz’s The Gambler, in which a school teacher’s gambling addiction drags him down.

Now Anna Boden and Ryan Fleck, the Writer/Director team behind Half-Nelson, a moving portrait of a school teacher’s fatal drug addiction have made Mississippi Grind –a gambling buddy movie steeped in the genre.

Mississippi Grind is a psychologically convincing character study of two mismatched gamblers who form a bond that is only as strong as the mutual dependency of the addicts.  Gerry (Ben Mendelsohn) is a divorced 40-something real estate agent by day and an indebted gambler on a losing streak by night. the cool, level-headed, ladies’ man will change his luck.

For a while, he does but rather than settling his debts, Gerry accompanies Curtis on a road trip down the Mississippi, to a big poker game in New Orleans.

Boden and Fleck are far less interested in action and plot than in character.  We become fully aware of Gerry’s debt problem thanks to a terrific cameo from Alfre Woodard who invites the impecunious Gerry for lunch at a dinner only to leave him without an appetite.

Sienna Miller is convincing as Simone, a prostitute who is in love with Curtis, but knows she can never trust his fanciful invitations.  Tipping their hat to a man who knows all about decadent lifestyles, they include a cameo from James Toback, who wrote the script for Karel Reisz’s The Gambler, here playing a tough-guy with no time for Gerry.

The problem with all films about addiction is that it is painful to watch self-destructive behaviour.  The filmmakers try to lighten the film with glimpses of Delta towns, humour and the possibility of romance, but we see how gambling destroyed Gerry’s marriage and Curtis’ desire to marry Simone.

As in Robert Altman’s California Split, the idea that women are good luck charms gives way to the reality that they are a distraction and potential liability.

While we could easily envisage Ryan Gosling or Jake Gyllenhaal as Curtis, this might be Reynolds’s best performance.  Behind his self-assured façade, we see pain as he realises his love for Simone is as impossible as his partnership with Gerry, a loser going off the rails.  As a lead-man, Mendelssohn is able to display an impressive range of emotions far wider than in his typical villain (Slow West) and psychopath (Animal Kingdom) films.

The Mississippi in the title seems to dictate the meandering structure of the film that makes it a challenge to sustain the tension. The film’s strengths and also its weaknesses derive from its buddy gambling genre. While there is much to admire in Mississippi Grind, for pure entertainment, it cannot match Robert Altman’s California Split, a film which it closely resembles.