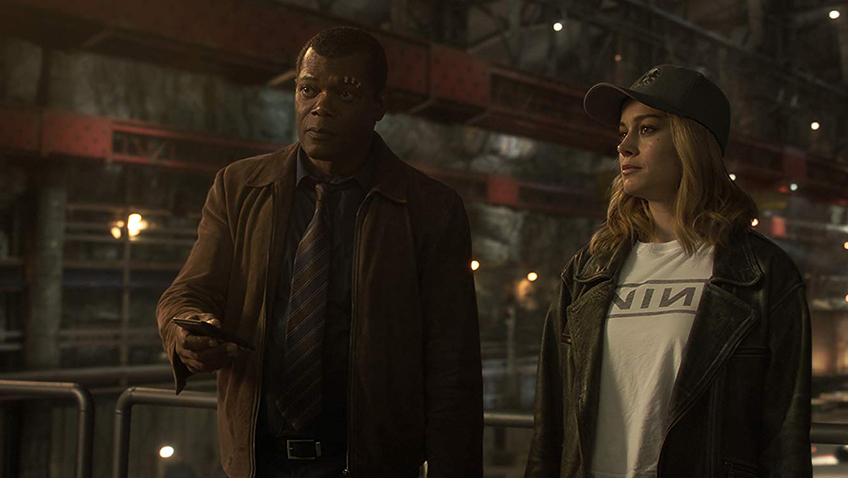 Samuel L. Jackson and his cat steal the show in this functional female-led superhero movie

The first thing to know is that, following the trend for more female superheroes (Black Panther, The Incredibles, Wonder Woman, Ghost in the Shell) Captain Marvel

is a woman, and the film is the first DC comics adaptation to feature a female superhero and to be directed by a female (half the team of Anna Boden and Ryan Fleck). That superhero is played by Brie Larson who won an Academy Award for the film Room which, in contrast to Captain Marvel

, had no CGI and was primarily shot in a 10ft X 10 ft shed. The second thing to know is that all roads lead to the bank vault known as The Avengers franchise, and Captain Marvel

Scarlett Johansson is already cast in the upcoming Avengers: Endgame (she is one of the survivors of ‘Avengers: Infinity War’) and so a new, similar replacement was needed. Like Johansson when she took on the Black Widow character, Larson is under 30, blond, pretty in an All-American way and curvaceous. In addition to her looks and ability to master 10 months of gruelling physical training, Larson brings class and a golden statue to the table.

She does a lot of that in Captain Marvel

, too as a wanna-be elite fighter on planet Kree called Vers. First, Vers has to prove to Yon Rogg (Jude Law), the head of Kree’s elite Starforce squad, that she can hold her nerve and control her powers: those high energy photon blasts from her deceptively normal hands are a killer. There’s plenty of running around, too in her escape from the canny Talos (Ben Mendelsohn) leader of the enemy Skrulls (elfin figures in wrinkled greenish rubber masks with big pointy ears) who have the ability to infiltrate anything by shape shifting. And the running continues in her escape from Samuel L. Jackson’s cop, Fury, when the skirmish with the Skrulls sends her to planet C-53 (AKA Earth). And then, after all that escaping, she has to find herself, helped by an encounter with an enigmatic recurring character known as Mar-vell (Annette Bening) who, Vers believes, is Kree’s Supreme Intelligence. 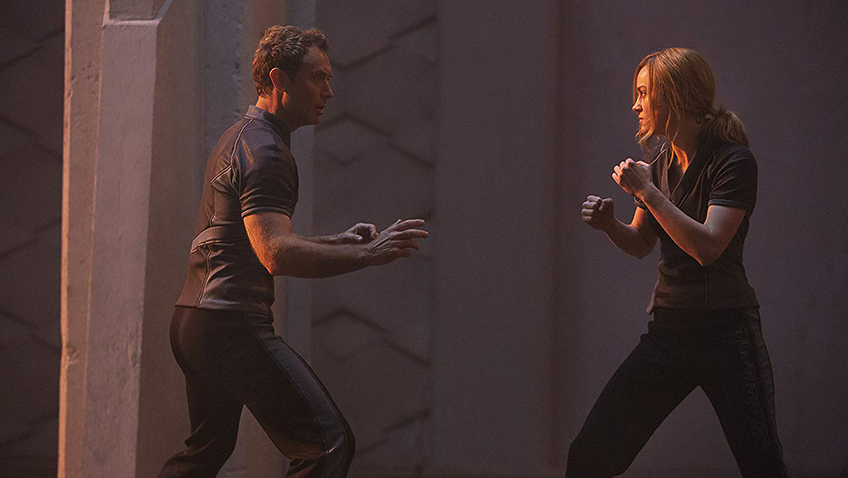 It could only help that Larson played opposite Samuel L. Jackson in Kong: Skull Island. He is another classy actor who is already entrenched in The Avengers franchise and is introduced to us here as ‘Fury’, the detective on planet C-53 who is bemused by the arrival of this weird chick in a space combat suit on the roof of a Blockbuster Video store in 1995. Fury still has both eyes when we first meet him and he is perceptive enough to realise that his best hope is to collaborate with Vers to find the Skrulls who have followed Vers to earth and have shape shifted into Fury’s boss.

After all this CGI action with the Kree (now represented by Vers) fighting the Skrulls, wandering into a military hanger is a game changer. Everything she has believed about who she is comes into doubt. Over the course of the film Vers has these doubts and flash backs to a life on earth as an all-American girl who keeps getting up when she falls. In these flashbacks, too, she was a pilot. Images of her best friend and fellow pilot and Mar-Vell, the developer of an enigmatic light speed engine, are recurrent images. To find her true strength and power, she must find her identity. 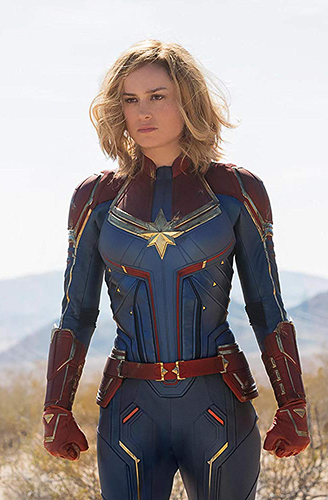 to the end of The Avengers: Infinity War.

This they do, but, with the exception of Larson, it’s nothing we haven’t seen before. And Larson is so engulfed in CGI and in her space suit and boots that all but her just-shampooed, bouncy hair, is oddly inert. The contrast between Vers and Charlize Theron’s Atomic Blond and Gal Godot’s Wonder Woman is striking, but Larson is less so. Despite the CGI shots of Vers shooting through space like superman, she fails to convince that she is a superhero with anything at stake.

And just as a weird alien superhero landing on earth like a fish out of water has been done before (e.g. The Terminator, Superman, Thor and Wonder Woman); so shape shifters were the biggest challenge for Arnold Schwarzenegger’s Terminator years ago. As for the vulnerable superhero with dreams from another life and an identity crisis, we can return to Johansson in Ghost in the Shell. She also played a cyborg hounded by glitches in her programmed mind that appear in the form of dreams of her childhood before she was programmed.

Boden and Fleck wrote two superb and one pretty good low-budget independent features without a bit of CGI, and all three featured flawed male protagonists: Half Nelson (it remains Ryan Gosling’s best performance), about a once idealistic teacher with a drug habit and the underrated Sugar (which they also directed), about a Dominican Republic baseball hopeful who cannot make the grade in the USA. Mississippi Grind (which they also directed) is a buddy movie about a pair of self-destructive gamblers who go on the road together with complementary skills.

So if Larson is not entirely cast against type, it is a surprise to find Boden and Fleck behind this CGI action comic adaptation. Perhaps that was the point, because producers realise that many viewers like a bit of character with their CGI kicks. If their female character never really convinces (even in the sentimental final scenes), the buddy relationship between Fury and Vers is entertaining. But the best part of the film is a less likely pairing: the ultra cool Fury and a stray cat he is left with are so hilarious together that they steal the show. From the moment they meet the film becomes accessible and fun and stops taking its ridiculous, hackneyed story so seriously.