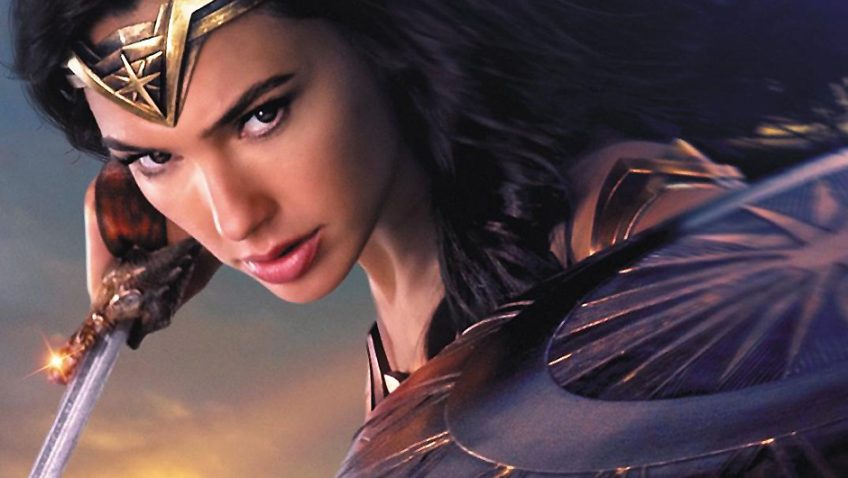 When it comes to fairy tales on the big screen, it’s all about the girl. For the most part, they are helpless victims, saved by a handsome prince in exchange for sex and servitude or eaten by a metaphorical wolf as a cautionary tale (she was asking for it) as in Little Red Riding Hood, The Little Mermaid, Rapunzel, Frozen, Beauty and the Beast, Sleeping Beauty, Cinderella… When it comes to superhero movies, it’s all about the man: Aquaman, Ant-Man, Spider-Man, Iron Man, Batman, Superman – and Men in Black. There are women to be sure, but they are subordinates. Needless to say, these superhuman blockbusters are directed by men. But director Patty Jenkins’ Wonder Woman

, starring the amazing Gal Gadot, relegates all that to history. In Wonder Woman

, the future Queen of the mythical Amazons saves a WWII Yankee pilot (Chris Pine) and takes on the Third Reich.

. After two years of military service in the Israeli army’s combat-training programme, Gadot did her own stunts in the Fast & Furious franchise and, in between, appeared briefly as Wonder Woman in 2016’s Batman vs Superman: Dawn of Justice. She was noted, but she did not really register; perhaps because nothing in that film did.

When we first meet the adult Diana Prince in the prologue of Wonder Woman, she does not really register either. The voiceover narration, however, does: ‘I used to want to save the world. This beautiful place… But the closer you get the more you see the darkness within. I learned the hard way a long, long time ago and now I will never be the same.’ An antiques dealer, living in 21st century Paris, Diana has just received a package from Wayne Industries containing a vintage photograph of herself long ago.

is an ‘origins’ movie, and Patty Jenkins has the unenviable task, as have other Marvel Comic directors, of taking us back to the origins of what will surely become a franchise in its own right. While TV Wonder Woman Lynda Carter stood tall with Gadot (who is 5’10”) at the film’s premiere, the filmmakers are aware that only the over 50s will remember Carter’s television series. So they start afresh, uninhibited by baggage. Paradise Island is Themyscira, an island that, like King Kong’s Skull Island, has somehow escaped discovery.

There the comparison with Skull Island stops because the all-female Themyscira is a kind of Aegean Paradise if you can overlook the fact that the static population (there are no sperm banks here) spend all day in combat practice with swords, shields and bows and arrows. We learn that after the Amazons helped Zeus triumph over his deadly rival Ares, god of war, in a huge battle, Zeus set aside the protectorate of Themyscira for the Amazons. There they could maintain their combat skills in perpetuity to guard the world against the return of Ares. By the time young Princes Diana (played by Lilly Aspell at age 8 and Emily Carey at 12) is old enough to begin training Queen Hippolyta (Connie Nielson) has discounted the likelihood of Ares’ return. She wants to preserve her daughter – who is also the only child on the island. For General Antiope (Robin Wright), Diana’s Aunt, the threat alert is always red, and Antiope agrees to train her eager and talented niece in secret.

When Diana (Gal Gadot) emerges as a young adult at the end of this terrific sequence on the island, Gadot does register – albeit with a faint echo of 26-year-old Angelina Jolie in Lara Croft, Tomb Raider. As well as the facial features, the long brown mane, and the gorgeous body with legs that go on forever, it is that low, caressing, husky voice that does it. After showing off her combat skills, Diana walks to the edge of the island to admire the view. What she sees, however is a German WWI plane falling out of the sky into the sea. After saving the pilot, Captain Steve Trevor, (Chris Pine) in a spectacular dive (Tom Daley eat your heart out), Diana notices ships approaching. Diana and Steve join the Amazons in a fierce battle with German troops that were in pursuit of Trevor, a London-based American spy. ‘Who are you?’ Diana demands. ‘I’m the good guy – they’re the bad guys,’ Steve explains as they seek shelter behind two conveniently placed enormous rocks. Chris Pine proves to be a terrific comic actor walking a fine line between hero and subordinate to a heroine. As the first man Diana has ever laid eyes on, Pine’s character also serves as the love interest. In this domain he can lead the way.

A double game of fish-out-of-water ensues as Steve struggles to believe that Amazons exist and that anyone can be unaware of WWI. As for the sensitive Diana, when Steve tells her that millions of people have been killed in this big war, it is all the proof she needs that Ares, the evil god is back. Leaving her mother both proud and heartbroken, Diana heads for the front, via London. Jenkins could have made the entire film a humorous fish-out-of-water story, but after a few amusing scenes – primarily men’s reaction to Diana – Diana is more frustrated than daunted by modernity. War is war and, being above political haggling – the British war office is reticent to act against Germany in light of an alleged ceasefire treaty – Diana’s sacred mission is to protect mankind. When she rushes across no-man’s land in her skimpy warrior outfit, armed only with a sword, shield, and her power armlets that shield against the machine guns, it is more exhilarating than ridiculous.

What Diana, Steve, and the small band of mercenaries that Steve gathers are after is a stash of chemical weapons. If this sounds familiar, don’t worry: this time they exist. The mission is privately financed, for their goal is to investigate intelligence on a Doctor Poison (Elena Anaya). The facially disfigured chemist is working with the ambitious General Erich Ludendorff (Danny Huston) on a chemical weapon to use against the allied troops. Diana believes Ludendorff is Ares and risks her life battling against him. After observing the conduct of those around her, however, she has a rude awakening and questions whether mankind is really worth saving after all.

The film collapses in the final fifteen minutes under a barrage of CGI explosions and a long CGI battle that is like so many other superhero battles. Unlike the rest of the film which deftly integrates the mythical fantasy with the gritty reality of WWI, this messy climax takes place in another, less interesting realm. In coming face-to-face with Ares, however, Diana discovers the secret that her mother never told her: the key to her godly powers. Go Gal!