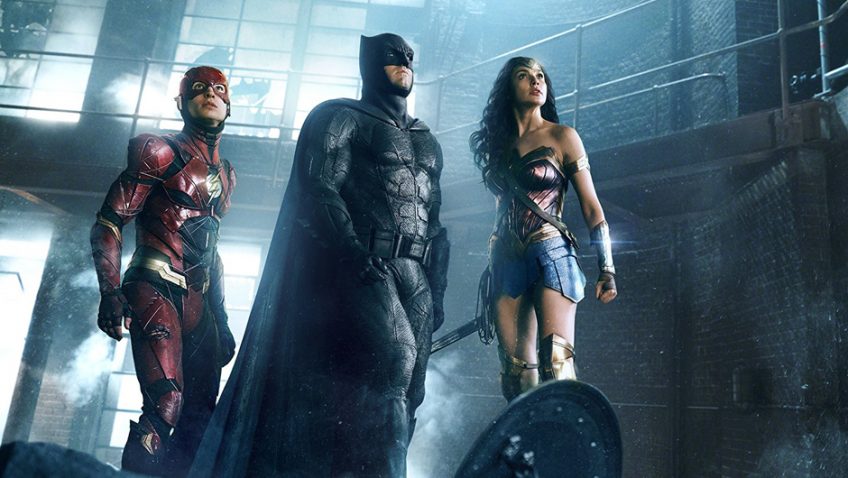 Justice and some terrific actors can barely save this Superhero film

This sequel to director Zack Snyder’s inferior 2016 film Batman vs. Superman: Dawn of Justice was beset with production problems, including a writers’ strike, a change of country and director Snyder leaving the production when tragedy struck his family. The talented Josh Whedon took over for postproduction and receives a joint writers’ credit with Dawn of Justice scriptwriter John Terrio. In the film, a group of humans with special powers (what else is new?) has to save the universe from a virtually indestructible monster named Steppenwolf (a motion-captured, devil-horned and masked Ciarán Hinds). The real question is: can the acting talent save Justice League from a sentence of death at the box office? One thing is certain, you will not be going to see Justice League for the story or for the dull villain. The earth is sufficiently dark for Steppenwolf (Hinds) to return after a failed attempt – thousands of years ago – to conquer the world with his army of Parademons and with the unification of three Mother Boxes. When separated, the boxes are benign. When combined, they give the possessor the power to destroy humankind. After the Olympian gods defeated the disgraced god Steppenwolf, the Mother Boxes were separated and hidden in three locations around the world.

The earth is growing dark because in the prequel to this film Superman was killed. Batman (Ben Affleck) accepts the blame, although there is doubt about the cause of death. And given Henry Cavill’s name in the credits, there is doubt about Superman’s death full stop. Whatever is going on, Lois Lane (Amy Adams) is too distraught to return to work and sits around bonding with Clark Kent’s mum, played by Diane Lane (Unfaithful). It’s not just the audience who will feel the passage of time after seeing Lane in this role. When Diane Prince tells Wayne, ‘You can’t keep on doing this forever,’ 40-something Wayne wonders how he can do it right now.

Bruce Wayne/Batman has to do his best to fill in for Superman and deal with a Parademon threatening the streets. He needs help. Recruiting a team of humans or gods with special powers is par for the course in almost every superhero or action film, and Justice League puts us through the drill once again. Wonder Woman (Gal Gadot) returns from her terrific solo film earlier this year – thank goodness. She is on board with a vengeance. Steppenwolf attacked her people on Thmyscira and stole the Mother Box that the Amazons were guarding.

Wayne elects to bring in Central City University student Barry Allen (Ezra Miller), a nerdy loner who might be have been diagnosed with Asperger Syndrome, but is instead welcomed to the team as The Flash. Barry is a handy recruit who is not only brilliant, but can move at the speed of light. He can also tap into the Speed Force in order to move as quickly as Superman can fly.

Wonder Woman has the more challenging task of recruiting Victor Stone (Ray Fisher), a former college athlete who has been cybernetically reconstructed following a car accident. Victor is angry and suicidal after going from popular jock to an angry and suicidal monster until The Justice League gives him a positive purpose. Stone has understandable problems with his father, Silas Stone (Joe Morton) and this therapeutic – though very dangerous – job helps bring father and son together. The best recruit for the adult women in the audience is Arthur Curry (Jason Momoa) He’s a blue-eyed, muscle-bound Viking mutant called Aquaman and swims half-naked in the dead of winter in the Westfjords of Iceland. He can breathe underwater and is very strong. Aquaman needs no incentive to join the team when he learns that Steppenwolf has stolen a Mother Box from Atlantis.

So this is the team, and when they are interacting, the film is intermittently fun, particularly when Diane Prince and Arthur are on the screen. While Ben Affleck delivers a painfully leaden performance as Bruce Wayne/Batman, he does have one great line. While playing father figure to Barry (Barry’s dad is in prison) Barry asks Bruce Wayne, ‘What is your superpower?’

It’s hard to work out if it’s Bruce Wayne or Affleck himself speaking when he replies, ‘I’m rich.’

Some effort is made to give the team relatable parental issues, particularly the two youngest recruits who have self-esteem problems and fathers who have let them down. However most of these relationships, if filmed at all, were left on the cutting room floor. Some effort is also made to make Wayne/Batman more interesting but it does not work.

Wayne has a conscience– and not just because Superman’s death triggers the Mother Boxes to activate and attracts Steppenwolf back to earth. ‘He’s more human than I am,’ the aloof Wayne laments to Alfred Pennyworth (Jeremy Irons), his butler, head of security and trusted friend. ‘He lived on earth. He got a job. He fell in love. The world needs Superman.’ And the plot, grinding dangerously close to a halt, needs Superman, too. A scheme is therefore hatched to exhume Superman’s body and place it in a Kryptonian ship alongside one of the Mother Boxes which the group has managed to secure – for now. The problem is that Superman does not react well to being so rudely awoken – particularly as he comes face to face with his nemesis, Batman. To avoid an outright battle among the good guys, Wayne summons Lois Lane. Lane, once a career girl with a Pulitzer in her sights, is now a calming agent, who takes Superman back to the family home in Smallville to recuperate for a big CGI battle.

And since you’ve remained until this point, stay until after the credits for a preview of a planned sequel as a familiar face makes an appearance to stir up trouble.