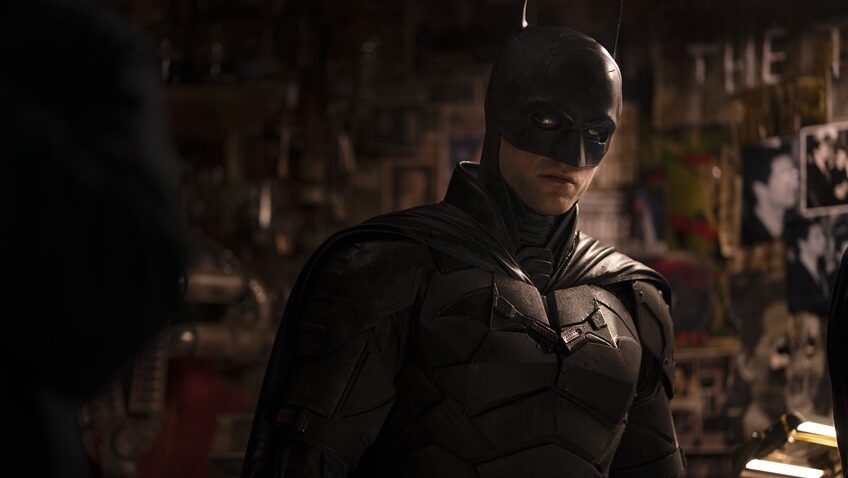 After a dozen Batman films (not counting the 1940’s serials) starring A-list actors including Michael Keaton, Christian Bale, George Clooney, Val Kilmer and Ben Affleck, and a dozen more spin-offs like Batman v Superman: Dawn of Justice and Justice League, it’s getting more difficult to find new ways to spend the vast budgets needed to pull in the big audiences. In addition to changing the lead actor and his nemesis, the Joker, how do you justify yet another Batman film?

For another, Reeves, taking over from Ben Affleck who bowed out as director, has cut off ties with the extended DC comic universe and made a self-contained film noir. The Batman faces a vigilante serial killer who leaves riddle-like clues to his grisly assassinations – a film close to David Fincher’s Seven. If Fincher broke new ground for a dark procedural, Reeves adds dark, profound language. ‘They think I’m hiding in the shadows,’ Bruce murmurs in his first-person narration, ‘but I am the shadows.’ Elsewhere he says, ‘I am vengeance’ – not to be confused with ‘Legend’.

Then there is heartthrob Robert Pattinson. The interest is in his unmasking, with his more accessible handsome, pale, broody face, and long dark brown hair that serves as a shadow if not a mask. Pattinson exudes pain in his whole unmasked body, hammering home that Bruce Wayne feels the weight of the world on his shoulders.

In this, Pattinson’s Wayne is close to Edward Cullen, the Twilight vampire role that made him famous and Wayne sometimes looks as though he longs to have Edward’s powers. He might have one, since we never see him eat throughout the entire movie.

But even with the mask on, and the black suit of synthetic armour that makes him look tall, big and daunting, this Bruce Wayne cannot fly (we see him trying, relying on the wings in his cape, but he falls and rolls on the sidewalk, bruised). He certainly can’t cover the territory the way Edward could in The Twilight Saga and he’s aware of his limitations. ‘It’s a big city,’ Wayne reminds us defensively, in an opening first person narration. ‘I must choose my targets carefully. I can’t be everywhere’.

While Batman is unique among superheroes for having no superhuman powers, he can take on a dozen thugs at a time without breaking a sweat. That said, we don’t see him working out at the gym, or taking steroid shots, or even creating gadgetry to improve his fighting power. He’s as far from Tony Stark’s Iron Man as possible in terms of Ironman’s interest in and dependency on science and industry.

The gadgetry role, such as it is, falls to Alfred Pennyworth (Andy Serkis) the family’s loyal butler, an ex-soldier. Bruce shows no interest. By now he is more interested in figuring out his father’s role in an apparent web of corruption that the Riddler refers to after every murder. This, alas, leads us to the plot. There’s far too much of it, but it begins with the Halloween murder of Gotham City mayor Don Mitchell Jr. His murderer calls himself the Riddler (Paul Dano, disturbing, but type cast) and leaves a riddle-clue for The Batman. “What does a liar do when he’s dead?” Bruce, who has been a vigilante for two years now, and already growing disillusioned, is on the crime scene with Lieutenant James Gordon (Jeffrey Wright) his sole ally on the force.

The local DA (Peter Sarsgaard) and The Gotham City Police Commissioner, Pete Savage (Alex Fern) are not supporters. Savage wants this vigilante off the crime scene and mocks his childish Halloween costume, which, of course, is what he wears every time the “Bat” signal in the sky alerts him to a new crime. But The Batman is the only one who can guess the answer to the riddle. “He lies still.”

When the Riddler’s next victim is Savage, things turn deadly serious. Someone has dirt on the top officials running the crime-infested city, but that someone, The Riddler, is making it personal by using and implicating Bruce Wayne.

Since the film lasts three hours and stars Pattinson, the plot calls for a pretty girl of his age. Sure enough, when The Batman and Gordon discover a thumb drive in the mayor’s car containing compromising images of the mayor at the Iceberg Lounge, they must investigate. Here Bruce meets Lounge waitress Selina Kyle, AKA the Catwoman (a skinny, fit Zoë Kravitz), although the only thing we see her steal is a passport later in the film.

When the Catwoman’s roommate, who also works at the Lounge, goes missing, believed abducted and murdered, there is common cause for the pair to work together. What Bruce learns is that Commissioner Savage was on the payroll of the gangster Carmine Falcone (John Turturro, Barton Fink). You can’t blame The Batman for being suspicious when he discovers that Selina has a very close relationship with Falcone, and that Falcone had a hold over Bruce Wayne’s father.

The Batman targets the Iceberg Lounge’s manager Oswald Cobblepot AKA The Penguin, who is the most amusing character in the film. If you heard that Colin Farrell was one of the co-stars, but can’t find him, it’s because he is buried under hours of prosthetics and unrecognisable. But thanks to The Penguin we get a fantastic car chase that ends with a great dramatic shot of the caped man emerging from an inferno, viewed upside down by the hapless Penguin from his wrecked car.

It’s not long before we share the first part of The Batman’s view, ‘The city’s beyond saving, but I have to try’. The corruption starts at the top, and arguably the Riddler has done more to clean up the city than The Batman who is a bottom trawler. But how can a mental case and loner like The Riddler (when you meet him, you’ll understand) organise the terrorist takeover of the city that occupies a good fifteen minutes near the end of the film? Hackers are one thing, but you need experts in explosives and reliable, armed militants all over the city. How does The Riddler organise them and pay them?

Perhaps these are not the questions to ask, but I would almost have preferred martial arts fights in the underground to all these riddles, red herrings, and anguished looks from our demoralised anti-hero trapped in a Pokémon game with no rules. But the box office needs a blockbuster, and The Batman is just that.