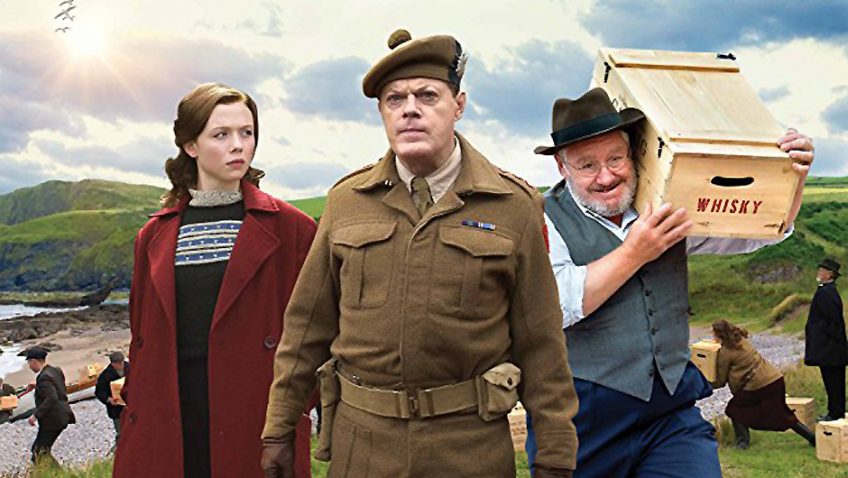 Whisky Galore! (Arrow) Compton Mackenzie’s story about the God-fearing island of Todday running out of whisky in World War 2 is based on truth. For the islanders, a dry life is not worth living. Morale sinks to an all-time low; but is given a boost when there’s a shipwreck and a cargo of 50,000 cases of Scotch whisky is just waiting to be looted. The original film directed by Alexander Mackendrick was one of three great Ealing Comedies released in 1949. (The other two were Passport to Pimlico and Kind Hearts and Coronets.) Why bother to remake what was perfect? The new version is not nearly as funny. It lacks the visual wit and it is not as realistic and dramatic. You would be much better off watching the original. It also has an infinitely superior cast, full of well-known actors.

The Big Sick (StudioCanal). American, Pakistani-born, stand-up comedian (Kumail Nanjiani) falls in love with a graduate student (Zoe Kazan) who falls sick (hence the film’s awful title) and has to have an induced coma so the doctors can operate. He visits her regularly throughout her hospitalization. Her parents are physically so absurdly mismatched that you wonder how the actors came to be cast. His parents, Orthodox Muslims (and behaving as if they were in a sit-com), want to arrange a marriage for him with a nice Muslim girl. His mum provides an endless supply of potential brides who “accidentally” drop by at dinner time; it’s a nice running gag. The script is by Nanjiani’s and his wife, Emily V. Gordon, and is rooted in their romance and it feels like television not cinema.

The Wall (StudioCanal) is set in Iraq in 2007 when the war was winding down. A wounded GI (Aaron Taylor-Johnson), pinned down behind a crumbling wall in the middle of nowhere, engages in a conversation, over their radios, with an unseen Iraqi sniper (voice only Laith Nakli) who taunts him: “The war’s over. Why are you still here? Why don’t you go home?” The camera concentrates on the GI and on what he sees and hears. Can he survive? It’s a one-location anti-war movie and it feels as if it was written for a tiny studio stage, Doug Liman directs.

Pulp (Arrow). Michael Caine has made a lot of bad films and Pulp is one of them. (“I am an actor,” he explained, “and I work for a living.”) It’s a badly scripted and unfunny spoof of a 1940’s film noir without the noir (except for the voice-over). It did not find an audience in 1972. Caine (who had just has a big success with Get Garter) is re-united with director Mike Hodges and is cast as a writer of pulp fiction who is engaged to ghost-write the memoir of an ex-actor, who had ties to the Mafia. The mobsters don’t want the memoir published. Mickey Rooney gives the film a lift as the exuberant ex-actor, shouting away and dancing in his underwear in front of a cupboard of mirrors and generally mucking about. Caine, deadpan, walks through his role, totally detached.

Micky Flanagan An’ Another Fing (Spirit Entertainment). I am told Flanagan is the country’s most popular comic. I thought it was time I saw him perform. The audience packed a large arena and laughed all the time. He had only to swear or say “slag” and there were roars of laughter. He was amusing when he went shopping in a local shop when his wife had wanted him to shop in a big supermarket. His relationship with his dog is amusing, too. And that’s about it. Flanagan will not be to everybody’s taste. Of the stand-up comedians I have seen performing in a theatre I rate Eddie Izzard, Jackie Mason, Lee Evans and Stewart Lee among my favourites. I am looking forward to seeing Chris Rock next year.