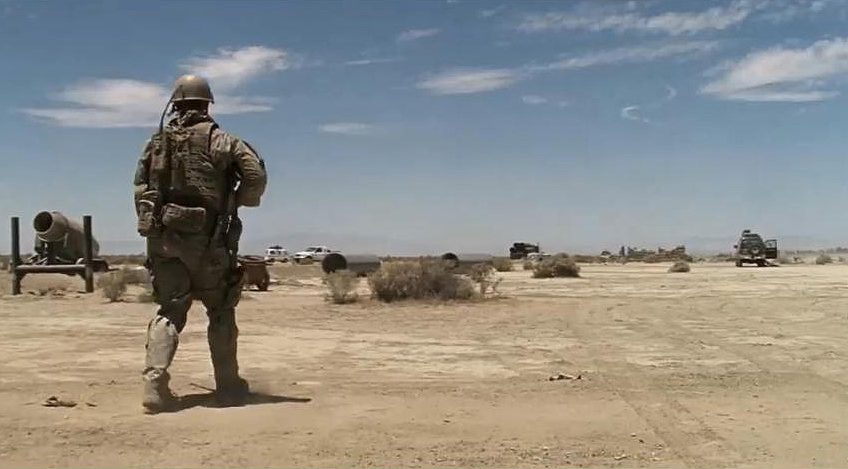 War movies come in all range and sizes, from the huge image (Imax and 65mm) and cast of Christopher Nolan’s Dunkirk to Doug Liman’s The Wall, shot on anamorphic 16mm film with a total cast of three. The third character, Iraqi sniper Juba (Laith Nakli) is a voice whose body we never see. Nor do the two US Army patrolmen who find themselves stuck in the Iraqi desert within shooting range of their invisible opponent. That is the premise of this taut, but gimmicky and ultimately underwhelming thriller. 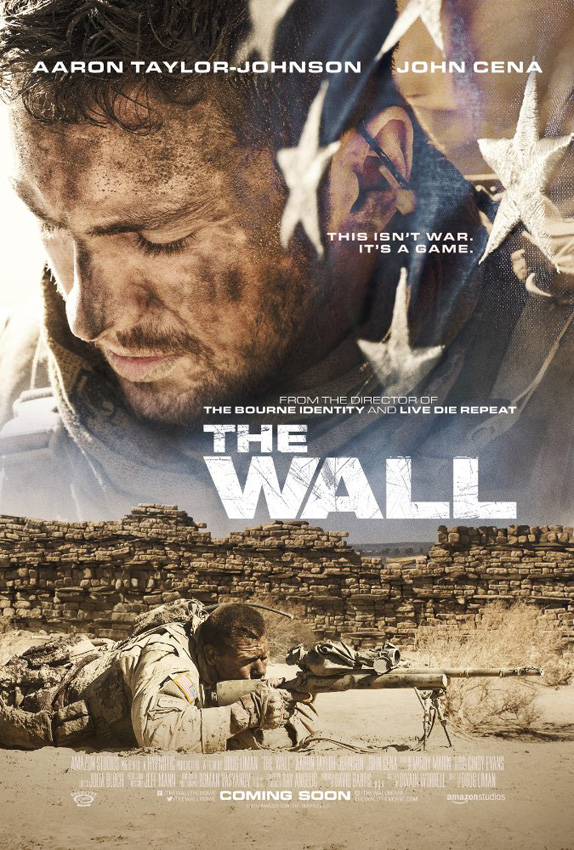 The nervous banter between Staff Sergeant Shane Matthews (John Cena), a sniper, and his spotter, Sergeant Allen ‘Ize’ Isaac (Johnson), sounds authentic enough: mindless sexual references and short hand communication. Its primary purpose, however, is expository as we learn that, after some 20 hours camouflaged near a convoy of slaughtered civilian contractors, the Sergeants assume that the coast is clear. Sweating in the punishing heat, Matthews walks toward the dead security guards to gather up their radios. Before the distracted Ize can react, Matthews is shot. As Ize runs toward Matthews, he is shot in the leg. He takes refuge behind the remains of an unstable stone wall, meters away from his comrade – and the enemy.

It is behind this wall that Ize lies wounded for the most of the remainder of the film – dashing out when the windblown sand creates cover to swipe water, a bit of food and a busted radio from a dead contractor. This is a survival of the fightest film, only Ize is not on a tropical island, but in a scorching, dry, windy desert, his canteen and his leg shot through.

As Matthews is either unconscious or dead (we later learn which), Ize finds himself with a new companion: the enemy sniper. Juba (Nakli) has obtained one of the contractor’s radios and tricks Isaac, with his surprising convincing American accent, into believing that he is talking to a commanding officer. Juba is after information, and Ize, once burnt, is determined not to give him anymore. As Ize deals with his open wound and aims his viewfinder at a suspicious rubbish pile, Juba begins to control the action. And when he opens his mouth, the movie collapses.

Cena, a former professional wrestler who played the body builder and drug dealer in the comedy Sisters, and a similar ‘dumb stud’ role in the chick flick Trainwreck, brings a noble heroism to Matthews, showing us a new dimension to the formerly type-cast actor. The talented Aaron Taylor-Johnson just about holds the film together, but, after his acclaimed role as a chilling psychopath in last year’s Nocturnal Animals, Ize is not a career defining role.

In the original The Bourne Identity Limon proved himself a master at creating suspense, and he even managed to keep the action exciting in the increasingly tedious time loops that characterised the Tom Cruise blockbuster, Edge of Tomorrow. Here, however, the high concept situation becomes the movie. If Samuel Beckett ever made a war movie, it might look like this: two miserable men, buried in sand, are at the mercy of a stranger, but never give up. It would not, however, sound like this. When Juba starts reciting Edgar Allan Poe and asks if Ize would like to hear some Robert Frost you have to wonder what this Renaissance man is doing in the middle of the desert picking off security guards.

Aaron Taylor-Johnson in The Wall

But it is when Juba tells Ize that he was an English teacher and the wall was part of a school bombed by the West that you start to recoil from the school master’s lectures. When a despondent Ize weeps like a child that he wants to go home, and clearly means it, Juba is right there to point out that the American’s do not want to go home. The proof is that the war is officially over and they are still there. Why, you wonder is this clearly high ranking Iraqi fighter debating the war with a famished, dehydrated Sergeant with a big, infected hole in his leg? Juba knows that the Americans, criticised as lacking an exit strategy, have stayed to ‘rebuild’ Iraq, at least in theory.

Liman and his crew manage to convince us that we are in Iraq when in fact the props – the crumbling wall, the machinery, the vehicles and the sand – that comprise the set are in Lancaster, California, just outside of Los Angeles. It might as well, though, be the stage of the National Theatre because ironically for a Doug Liman film, The Wall has that air of a contained stage set. If Ize understands he’s been tricked, so are sometimes conscious of the staginess of the action.

The Wall is the feature debut of American scriptwriter Dwain Worrell who is not a war veteran. He is, however, an English teacher living in China, who seems to have imagined his Iraqi counterpart as the righteous villain of his script. The problem is that Juba is over qualified. He is more like an English scholar than an Iraqi village school teacher. He is also a highly skilled marksman; a clever strategist (he has clearly outsmarted the US army); a hardened killer and a mind-reader. Juba’s superiority lends the film a fatalistic, dystopian tone that should leave us shaken and insecure rather than dissatisfied.