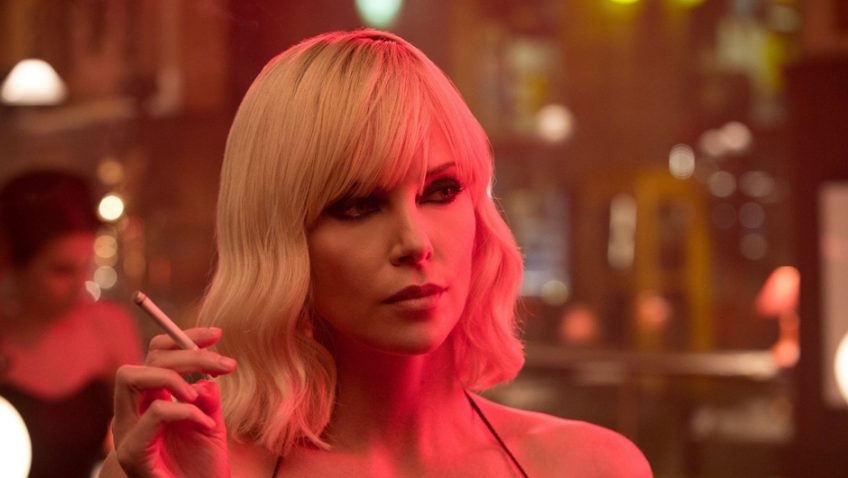 Charlize Theron rescues her film with a killer performance

Don’t expect the contemplative, melancholy atmosphere of John Le Carré in this adaptation of the graphic novel, The Coldest City, a cold war spy story set against the backdrop of the collapse of the Berlin Wall in 1989. Don’t expect a style innovation or the intrigue of a Jason Bourne thriller either, for if imitation is the sincerest form of flattery, Atomic Blonde

is out to flatter rather than innovate. What you can expect is great, old-fashioned stunt work for Atomic Blonde

is the directorial debut of David Leitch, stuntman and stunt coordinator (with an uncredited stuntman role in The Bourne Legacy) in dozens of films since 1997. What you can also expect is a killer performance from Charlize Theron.

Charlize Theron, born in South Africa, is one of Hollywood’s great – and most stunning – character actresses. She was nominated for an Oscar for playing an abused wife who campaigns against sexual harassment work in the biopic North Country. Theron won an Academy Award for transforming herself into serial killer Aileen Wourmos in the 2003 biopic Monster. She was equally convincing as a divorced, alcoholic ghost writer who reaches rock bottom in Jason Reitman’s absorbing film Young Adult (2011). And then, as her 40th birthday approached, Theron became the queen of action heroines in the physically demanding role as a feminist rebel leader in the terrific thriller Mad Max: Fury Road.

That David Leitch convinced Theron to star in his directorial debut (he was the co-director on 2014’s slick action film, Jack Wick, but uncredited) is a coup because Theron is the reason to see the film. Kurt Johnstad’s undistinguished script does not provide talented co-star James McAvoy with anything that he can make his own, while the rest of the generally well-known cast have little to do but recite their lines.

In a blunt prologue MI6 agent James Gasciogne is shot and killed by KGB agent Yuri Bakhtin who now has the List. The List is a precious piece of microfilm that was concealed in Gasciogne’s wristwatch, the handiwork of The Watchmaker (Til Schweiger), a mysterious, discreet loner who works with MI6 in Berlin. As the List contains the name of active field agents in the USSR, it is worth killing for.

The day after Gascoigne’s death reaches London, MI6 agent Lorraine Broughton is sent to Berlin to recover the List. She must also terminate an evasive double agent known as Satchel who has, it is believed, betrayed Gasciogne and has been betraying too many spies to live. First, however, she has to find Satchel and her main contact, Agent David Percival (McAvoy) is not as helpful as he should be. In fact, Lorraine begins to suspect that it is Percival who alerted the KGB to her arrival from the get-go, and who turned her already dangerous assignment into a mission impossible.

A wary Lorraine relates her increasingly complicated Berlin saga in a debriefing interview and the film’s authentic-looking stunt segments are shown as flash backs illustrating her story. Her story also makes clear why she is bruised and exhausted, although given the number of Russian assassins and heavily armed Stasi she has to fight, you would expect her to be on the critical list in the hospital.

The interview is more liked an interrogation than a debriefing, as, rather ironically, given what Lorraine has been through and accomplished, Eric Gray (Toby Jones), her MI6 supervisor, and Emmett Kurzfeld (John Goodman) a CIA agent working with MI6, are highly critical of her failed mission.

Theron manages – against all odds – to turn her comic-book heroine (Leitch goes after a sepia film noir look) into an almost credible agent which would not be the case had Theron not performed 95% of her own stunt work. If is only by doing her own action sequences that you believe Lorraine can survive with her superior brawn, brains and training. In an interesting, and not altogether gratuitous change in the normal agent profile, Lorraine reveals herself to be a lesbian, adding some flesh to the bone of a gorgeous seductress who can make any man’s head turn. Lorraine might be doing a man’s job, but she brings out the best in the script with her controlled, throaty voice commenting that if she knew what was in store she would have worn a different outfit. In one particularly bloody scene, Lorraine wears a white coat that would be a shade darker just from a trip in the London underground.

Women did not wear garters and stockings in 1989, but Lorraine does, and she thinks nothing of wearing spiked heels rather than Nike trainers either, even when hurling assassins down the stairs. The heels do come in handy as weapons, of course, and when under cover, the elegant and sexy look gives her more mileage than would dressing like a killer. But by the end of Atomic Blonde

neither Lorraine’s superiors nor her foes are left in any doubt: she’s a killer.