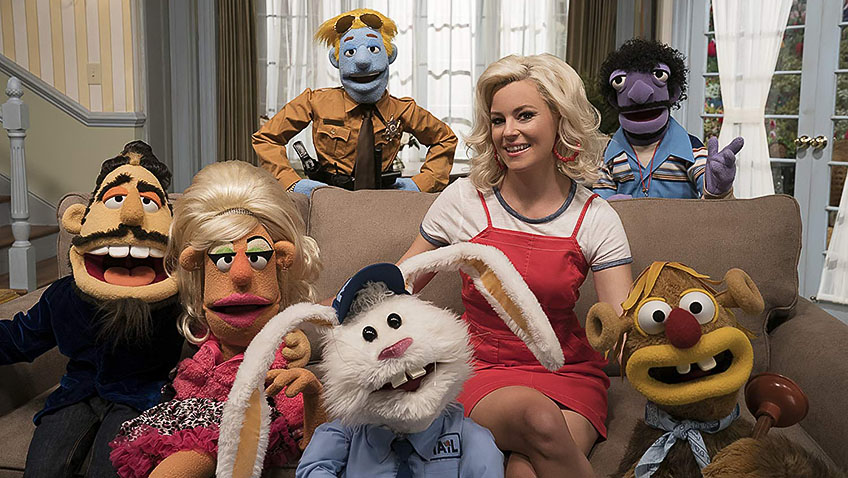 The high concept behind this black comedy and spoof film noir is intriguing if not as original as it appears. We’ve seen a variation of it before in films including Blade Runner, X-Men, Total Recall and in Ghost in the Shell: human crime fighters sharing a dystopian world with androids, robotic humans and intelligent creatures. But turning the story’s private investigator (PI), straight out of Raymond Chandler novel into a blue fluffy, puppet with an impressive sexual drive is certainly novel. There is also the risky and not altogether successful merger of the Muppets with Melissa McCarthy. Here’s yet another movie in which McCarthy (Spy, The Heat) plays a detective agent with more foul language than self control.

The creative team behind this endeavour explains everything. Top of the list is 54-year-old director and producer Brian Henson, son of Muppet creator Jim Henson; scriptwriter Todd Berger (writer of two Smurfs movies and two Kung Fu Panda movies) and producers Melissa McCarthy and her husband Ben Falcone, whose influence on all of McCarthy’s films after her break-through film, Bridesmaids, is keenly apparent. And then there is Bill Barretta who has been voicing Muppet characters (and serving in other capacities on the films and television series) since 1991.

Chain smoking Phil Philips (Barretta, excellent), a disgraced cop who ekes out a living as a PI, works in a downmarket office in pre-internet Los Angeles with a loyal, underpaid, human secretary, Bubbles (Maya Rudolph, who appeared with McCarthy in Bridesmaids). When puppet-client Sandra White (Dorien Davies) asks Philips to find the person who is blackmailing her over compromising photos he tells us, in Philip Marlowe-like narration, that he should have turned it down. 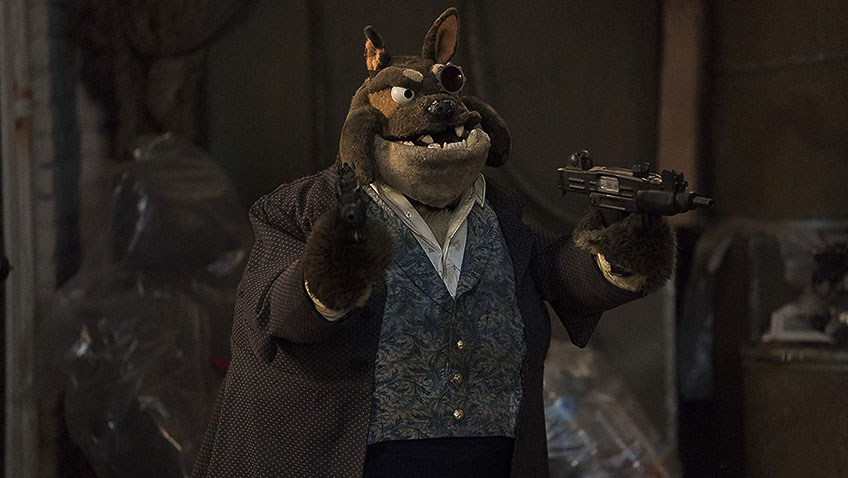 The detective assigned to the case is Connie Edwards (McCarthy) – coincidentally Philips’ ex-partner and the reason he is no longer on the force. The police consider it was a robbery gone wrong, until Phil swoops up a pile of cash to prove that nothing was taken. The animosity between Edwards and Philips, whose repartee throughout the case is the script’s comic backbone, has a history, of course.

Edwards accused her partner of failing to shoot a criminal holding her at gunpoint because the gunman was a puppet. We see in a flashback that has always haunted Philips that when he finally shot, urged on my Edwards, he missed and killed an innocent man on the street, who died in his daughter’s arms. The incident, which, through the press fed into the human agenda, created a law barring puppets from servicing on the police force. 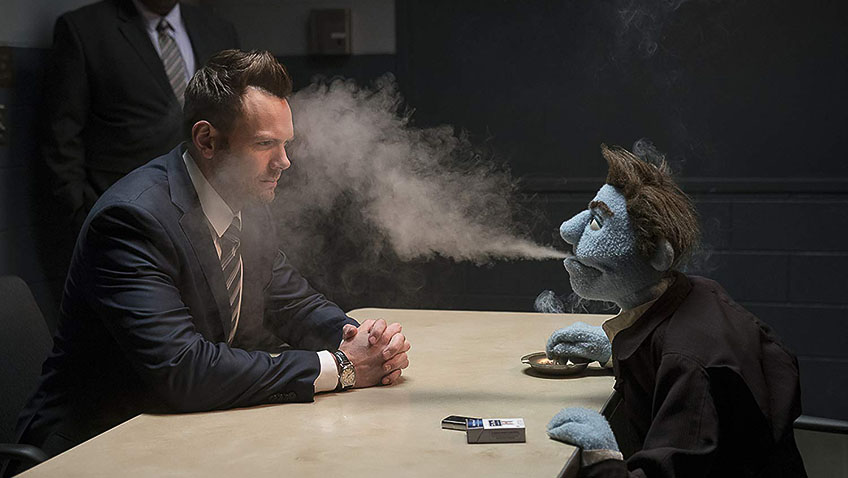 Bill Barretta and Joel McHale in The Happytime Murders

Philips soon has reason to believe that the killer is connected with royalties due to the surviving cast of the 1980’s children’s television show The Happytime Gang in which his own brother, Larry Shenanigans (Victor Yerrid) played a police detective. Phil goes to warn Jenny (Elizabeth Banks), the beautiful, sexy human member of the The Happytime Gang, who, rather unbelievably, was in love with Phil. She rejects his offer of protection, and as she starts her car, the engine explodes, leaving us to assume that she has been murdered. Once again, the police spot Phil at the scene of the crime and now it’s a matter of arresting him. 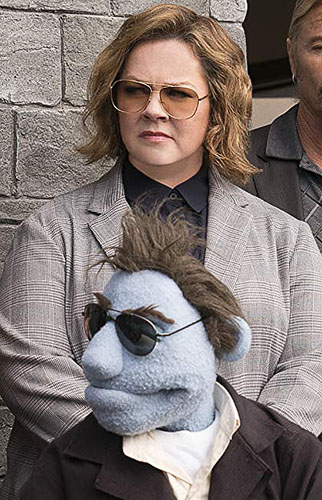 Bill Barretta and Melissa McCarthy in The Happytime Murders

The obvious metaphor here is racism, the kind that African American police Lieutenant Banning (Leslie David Baker), Edwards’ boss, is no longer subject to. He recognises Philips’ detective skills and allows Philips to investigate the case with Edwards. But it’s the kind of metaphor (used most recently in Incredibles 2 which highlights the prejudice that is leaving superheroes depressed and unemployed) that is a kind of cliché in itself, particularly as the puppets seem to claim an abnormal sexual obsession and appetite. There is also a related tension among the puppets, with some, Like Larry Shenanigans, who bleached his fur white and hair a brash blond, believing that the best way for puppets to live in a human society is to hide their brains and provide the entertainment for the master race.

Berger and Henson seem to believe that including all the clichés of the PI genre in one film and a ‘whodunit’ plot that has a big hole in the middle is fine because of the novelty element. But it’s not. The Chandleresque setting is always a winner, but if the story and plot are weak, the characters have to make up for it, and here they are just not interesting or original. The film is left to hang on the jokes, a tenuous position as there are few jokes that even crack a smile. One long running gag has various puppet characters mistaking Edwards for a man.

Henson has ventured into adult fare before, but Phil Philips’ sex scene with White is embarrassingly gratuitous and puerile. As Banning and a puppet hating FBI agent (Joel McHale) pay a visit to Phil’s office, they hear groans and screams and see puppet sperm projectile-sprayed against the windows. Bubbles (who is not-so-secretly in love with Phil) matter-of-factly wipes a spot off the FBI’s agent suit before heading for the window. While the scene might explain why Jenny was attracted to Phil, his response to White’s seduction is out of keeping with his rational, controlled character. For the rest of the film – thankfully, as it happens – that side of Phil is never revisited.