Home / LIFESTYLE / REVIEWS > / FILM REVIEWS / As good as she is, Johansson is the biggest déjà vu of the film 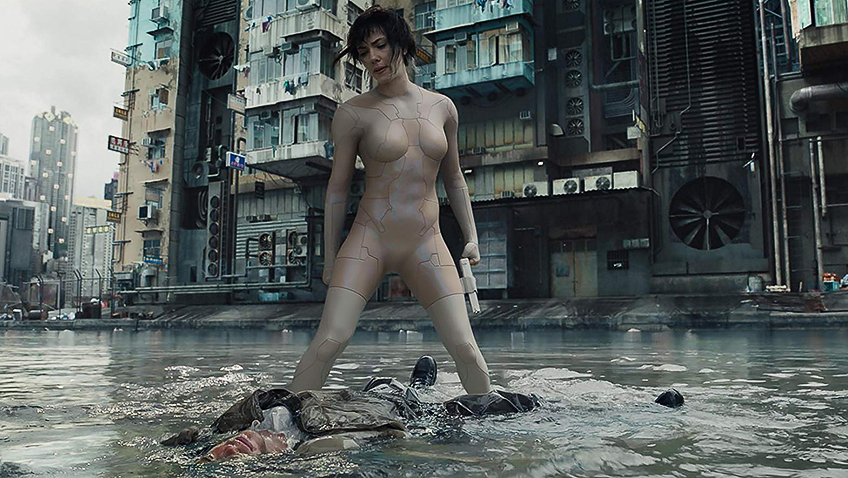 As good as she is, Johansson is the biggest déjà vu of the film

Ghost in the Shell

is based on the science-fiction manga story by artist Masamune Shirow (pen name for Masanori Ota) that was so popular it was made into a 1995 hit animated movie by director Mamoru Oshii; another animated film and countless television programmes and video game spin-offs. Part of the success came from the fact that the cyber-enhanced anti-terrorist fighter is a woman.  Now, twenty years on, Rupert Sanders, the British director behind Snow White and the Huntsman carries the burden of directing the first live action feature film of the manga, tweaked for western audiences.  In a nut shell, he acquits himself brilliantly in the visual domain, blending the best of Ota and Oshii’s futuristic world, (which itself looks inspired by Blade Runner) with the latest special effects, and some imaginatively staged set pieces of Sanders’ doing. The story and characters, however, are too derivative to make this a landmark Sci-Fi action film.

What it surely is is a 100 million dollar Hollywood movie and as such Sanders chose one of the only actresses in the world who could assure a profit, Scarlett Johansson playing the eponymous ghost and the Major. There has been protest about this casting decision, but manga girls have straight, short black hair and white stateless faces with button noses and big eyes: and, with a wig, so does Ms Johansson.

To avoid being called an ugly American and to appeal to manga fans the world over, Sanders has chosen an impressive international caste headed by the great Japanese director/actor Takeshi Kitano, now 70 who plays the Chief of Public Security for Section 9, and the Major’s boss. Then we have the handsome American actor Michael Pitt as the misunderstood terrorist Kuze; the French actress Juliette Binoche as the corporate doctor with a conscience; Brit Peter Ferdinando as her psychopathic boss, Mr. Cutter, the head of Hanka Robotics; the Singaporean actor Chin Han as Togusa, a cyber-enhanced human recruited by the Major; and the Danish actor Pilou Ashaek (with white hair and cyber eyes) as the Major’s platonically devoted sidekick, Batou.  Ashaek played a minor part in Johansson’s 2014 Sci-Fi film Lucy, so his presence here reinforces a sense of déjà vu.

As the above character list makes clear, before we even get to the plot, the déjà vu does not stop with Batou.  Everyone plays a character familiar from dozens of superhero and Sci-Fi movies and everyone is typecast.  Kitano spent his life either playing a member of the Yakuza, or, as a cop, battling them. Michael Pitt tends to be cast as the moody, misunderstood loner type (or someone mentally ill), so he fits the profile of the Major’s target, a mysterious ‘terrorist’ technical genius, so determined to sabotage Hanka Robotics’ A.I. network that you have to suspect it’s something deeply personal – which of course, it is. 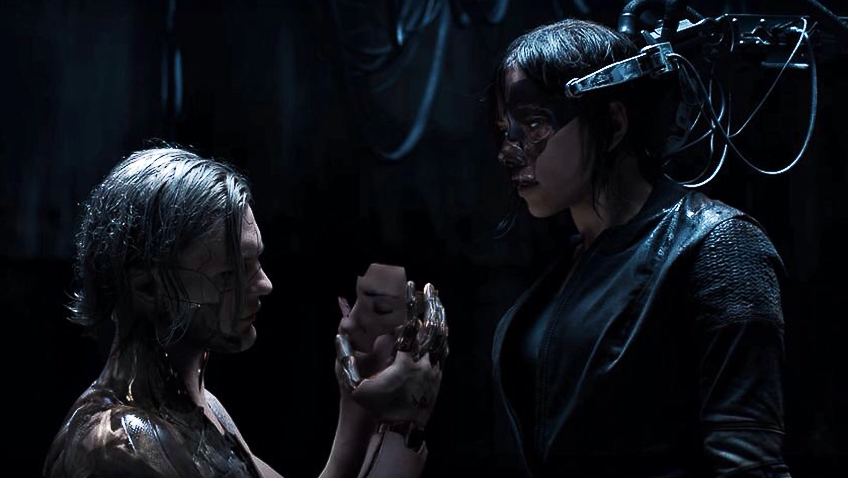 Scarlett Johansson and Michael Pitt in Ghost in the Shell

Over at Hanka Robotics (Ironman anyone?), Mr. Cutter is that one-dimensional villain, the scientist/engineer who has sold his soul for money.  From Omnicorp in Robocop to S.H.I.E.D in Ant-Man to Zander Rice’s Transigen in Logan, the comic world is full of such people.  Binoche plays Mr. Cutter’s top cyber-enhancement surgeon, Dr. Ouélet, who, like Biochemist Dr Hank Pym in Ant Man, realises too late that her scientific triumphs have come at a cost.  In Binoche’s break- through film, The English Patient, she played a nurse, who also took a personal interest in her patients. Her patient here is equally good looking, but a lot more complicated.

For the Major is a cyborg counter-cyberterrorist, specifically designed for the generic government by Hanka Robotics. She is to be the best of both worlds: human (the mind) and body (the super strong robot).  The Major is led to believe that she is the first and therefore, the only such being whose brain, or ghost, is stuck onto an artificial body (the shell).  She is told that her parents were drowned in a refugee boat accident and that while she was rescued, her body was too badly injured to save.  ‘Only your brain survived,’ the doctor explains.  The Major never questions her new job, which is to combat criminal network hackers and/or state terrorists.  For now brains are connected to a network (Batou and the Major speak to one another without phones or other electronic or other devices) and Major’s first task sees her diving down into a meeting room, infiltrating a criminal geisha’s head, and saving several men meeting with Mr. Cutter from a terrorist attack.  Her boss, the Chief, is not happy about the Major’s unauthorised action as the geisha’s mind had been hacked by a mysterious terrorist and that puts the Major’s mind in danger. 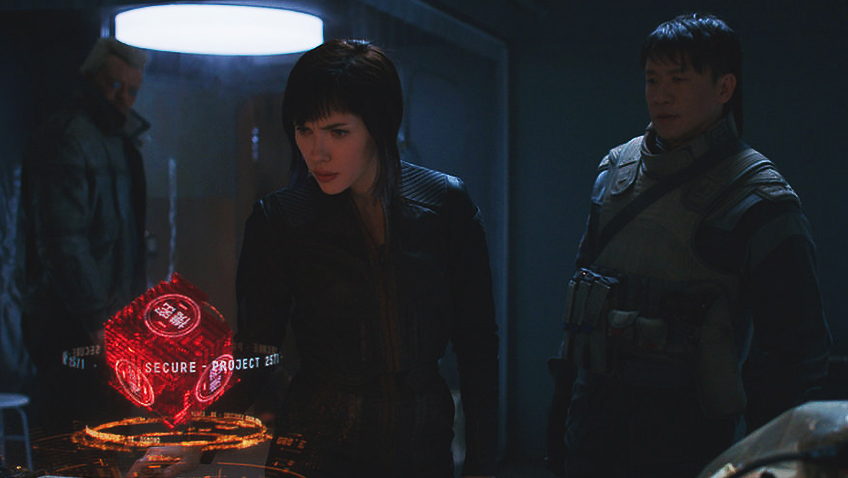 But already the Major’s mind, with all her memories of the refugee boat disaster erased, is experiencing glitches that confuse the Major.  If this troubles her it really troubles Dr. Ouélet.  Nonetheless, it is the Major’s journey for her true identity which becomes the plot of the film. As such, it is nothing new, but it is a satisfying story that is accessible even to those who find the film’s first twenty- minutes unfathomable.

The problem is that, good as she is, Johansson is the biggest déjà vu of the film.  While playing a misfit, with her brain sitting uncomfortably on a body (a combination sustained by drugs and electronic charges) might sound like a great role, Johansson’s been there and done that; and her fans and cine-files have been there with her.  In Her, she played a disembodied computer system seducing a lonely office worker. In Under the Skin she played a powerful alien sent to earth to prey on males, while in the terrific thriller Lucy, she plays a college student who accidentally imbibes a drug that turns her into a super hero of a totally different kind. And of course there’s the Marvel Comic super heroine Black Widow, which, like her alien in Under the Skin, gives directors ample opportunity to show off Johansson’s curves.

At least as the Black Widow Johansson’s body-clinging costume is black. You have to wonder why all the male characters do their thing fully dressed while the Major runs around in a flesh-coloured, skin-tight shell that shows everything but the bits that would have offended the classical scholar John Ruskin.