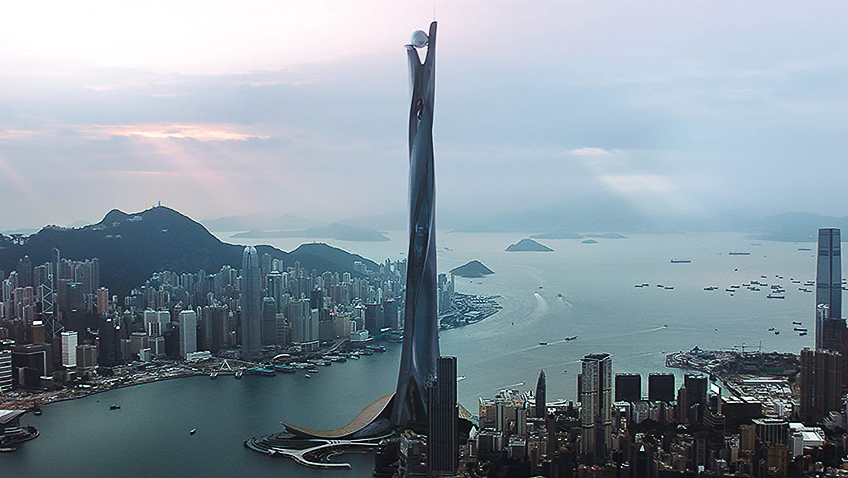 Only ‘The Rock’ could pull off this Mission Preposterous

In the 1974 disaster movie Towering Inferno, an all star cast that included Steve McQueen, Paul Newman, William Holden, Faye Dunaway, Fred Astaire, OJ Simpson, Richard Chamberlain, Robert Vaughn, Robert Wagner – and the San Francisco Fire Department all have a part to play when a fire starts during the dedication ceremony of the world’s tallest building at 138 stories. Fast forward 44-years when a fire starts on the 96th floor of a recently completed 240-storey Hong Kong tower. All it takes is two people: disabled security consultant Will Sawyer (Dwayne Johnson) and his multi-lingual military doctor wife (Neve Campbell) and a whole lot of CGI to save the day. Skyscraper

could have been titled Mission Preposterous or Rampage 2, a reference to Johnson’s last blockbuster, Rampage in which it was a couple of bioengineered monstrous animals that scaled Chicago’s skyscrapers. Now Johnson’s Will Sawyer is having a go.

In Rampage Johnson’s Wildlife Sanctuary Primatologist has his impressive CV read to alert us to the hero’s qualifications for what is to follow. Here, too, when Hong Kong Police Inspector Wu (Byron Mann) reads out the mysterious security contractor’s CV, it is supposed to impress us and, more importantly, qualify him for the mental and physical trials to come. But it is a futile ploy as no one really believes any human being can do what Will Sawyer does.

To ensure that any semblance of reality is removed (and to preserve the profit margin) the film was not even shot in Hong Kong, but in the tax haven of Vancouver. And there is so much CGI between Johnson and the building that you wonder if a model of the stunning building were even built.

Will Sawyer has been practising the Chinese sentence that his linguist wife, Sarah (Campbell) has taught him to impress property developer Zhao Long Ji (Chin Han, Ghost in the Shell, Contagion) during his interview for a top security job that seems like a done deal. Zhao has already installed Will, his wife and their twin children on the 96th floor although, apart from them, and Zhao’s enormous penthouse, the entire top half of the building is conveniently, though rather implausibly uninhabited. 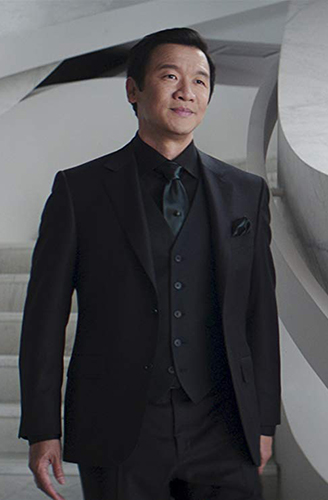 With a cagey insurance inspector named Mr Pierce (Noah Taylor) present Will has to approve the complex systems that make ‘The Pearl’ the safest, as well as the tallest, building in the world. A high tech fire system that few can understand makes it impossible for a fire started in one apartment or office to spread.

But that claim does not factor in a villain like Kores Botha (Roland Møller) a maniac who obtains the code to disable the fire protection system. With his minions whose lives are worthless to him, he starts a fire while they are all in the building to obtain an incriminating flash drive from Zhao. As Will learns late in the film, that drive will expose the details of the mafia contacts at the receiving end of his extortion racket.

If this seems like an incredibly elaborate and risky way to get to Zhao, it’s nothing compared to Sawyer’s suicidal mission to save his family when the fire spreads to their new accommodation. Botha did not count on the Sawyers being home, but when they return early after one of the kids takes ill, he is happy to burn them alive.

As long as the mobile phones are working, Will can assure his family that he is coming to save them, and issue instructions on what they should be doing in the meantime. With no fire department, and with the impassive police and half the population of Hong Kong watching, Will scales the towering inferno, jumps from a crane some 20 metres into a window, and crawls around the circumference of the class tower with sticky tape on his hands – to rescue his family. 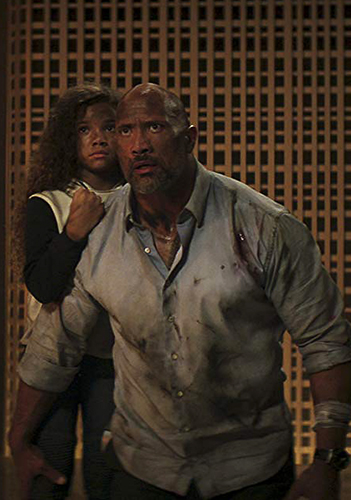 Here we must backtrack to include a couple of handicaps that writer/director Rawson Marshall Thurber concocts to make his hero even more heroic and the mission even more impossible. First, he begins the film ten years earlier when hostage rescue commander Sawyer makes a mistake that costs his grudge-holding colleague Ben (Pablo Schreiber) a facial disfigurement and Sawyer a leg. The second handicap involves Will’s tablet with all the building’s security information being stolen. The third is that the police suspect that Will is behind the attack on the building, and are not investigating what is really going on.

For a while, we lose sight of the fact that Will is doing all this vertigo-inducing climbing, jumping and physical fighting with a prosthetic leg. Far from being a handicap, though, Will gives heart to war veterans everywhere when he demonstrates all the practical ways in which the leg – if you can whip it on and off fast enough – can save your life.

Marshall Thurber (Central Intelligence, Dodgeball: An Underdog Story is a talented writer and director whose films usually have a comic touch that enhances their entertainment value. As Johnson’s films become increasingly silly and self-aggrandising (Sawyer becomes the toast of Hong Kong, looked up to by an adoring crowd of awe-inspired Chinese) his acting skills have improved to the extent we are willing to accept the nonsense. He has gravitas and charisma in spades. But if Marshall Thurber can write comedy, Johnson can deliver it so it’s a shame that the film takes itself so seriously.

Maybe it’s the disturbing emphasis on the family in danger that dominates the film like a tribal mantra that is behind the absence of wit or even visual gags. Does a writer really have to appeal to family values so literally and emphatically to be a hit in Middle America? In too many recent films the hero is willing to destroy half the world to save his son or daughter in the emergence of what is a disturbing aspect of protectionism.