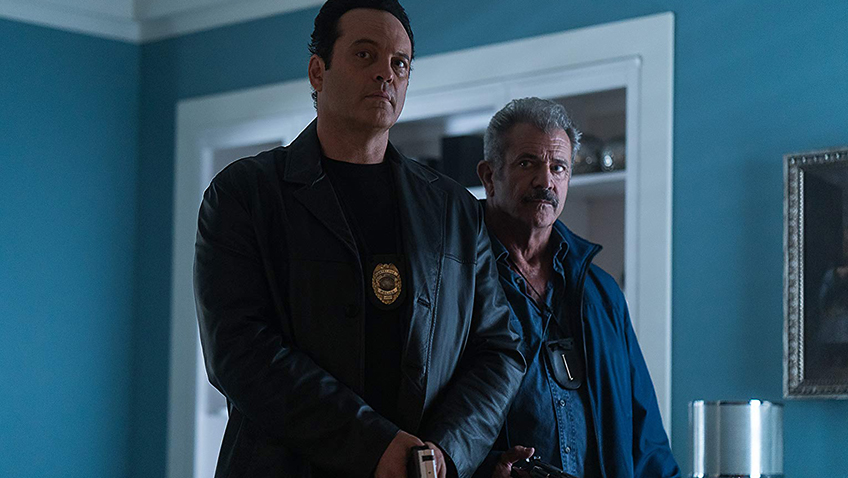 S. Craig Zahler is a novelist, musician, songwriter, singer, cinematographer and screenwriter, who, at the age of 42 directed his first film: the fabulous supernatural western, Bone Tomahawk (2015). This was followed by a prison movie, Brawl in Cell Block 99 (2017); and a third, a cop movie out this week, Dragged Across Concrete

. Zahler works within well defined genres and enjoys exploiting their tropes, but he makes them his own, with humour, pitch-perfect dialogue, and luxuriously long, talkative scenes that breed excruciating tension. All three films have their violence written into their titles and star middle-aged (or older) actors. They all include the kidnapping of a woman and offer opportunities for varying degrees of self-sacrifice. Dragged Across Concrete

has been surrounded in controversy over its racist cops, not least because of the casting of Mel Gibson, whose own racist rants ruptured his career, now on the mend. But whether Zahler is himself a racist or is describing a reality with its own just deserts is more difficult to establish.

Although Gibson, grizzled and calm in one of his best performances, is undoubtedly the star of this film, the story begins and ends with Henry Johns (Tory Kittles) a black ex-con whose first port of call after being released from prison is a prostitute’s room. The second is visiting his family, but Johns returns to find his mother (Vanessa Bell Calloway) is doing tricks to pay for her drug habit. After giving her pathetic client his marching orders, Henry walks to the adjoining bedroom door and says hello to his younger brother Ethan (Myles Truitt), confined to a wheel-chair. He joins Ethan in a video game about a jungle adventure and lion hunt. The law of the jungle motif recurs a little later on and again at the end of the film. Very little in this film is gratuitous, although what Zahler is trying to say is not always clear.

The clichés about black inner-city families are already mounting in Zahler’s fictional city of Bulwark circa 2018, but it is not only this portrait of the Johns’ family that contributes to the count. In another part of town partners Brett Ridgeman (Gibson) who is on the verge of retirement, and Antony Lurasetti (Vince Vaughn), a seasoned cop approaching 50, have their own share of clichés. When we first meet them their verbal abuse of a Hispanic drug dealer (Noel G) and his girlfriend (Liannet Borrego) is disgustingly racist, while the physical abuse is demeaning. When a video of the arrest finds its way to Chief Lieutenant Calvert (Don Johnson), the two are suspended with no pay. Films in which cops are suspended for prioritising the ends over the means go back further than conservative actor Clint Eastwood’s Dirty Harry or Gibson’s Lethal Weapon series. 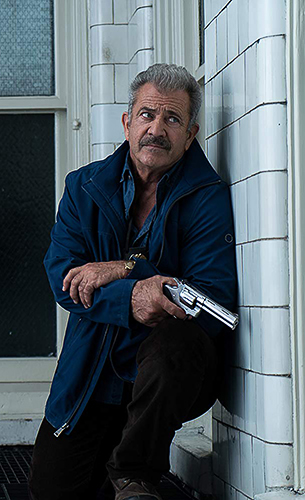 Mel Gibson in Dragged Across Concrete

Zahler makes sure that we know this drastic (and obviously, unrealistic, as there are lengthy protocols for the dismissal of a police officer) action is not motivated by a sincere desire to root out racism but by the reality of what he condemns as today’s political correctness. Calvert, another sexagenarian and Ridgeman’s former partner, warns the men, ‘Being branded a racist in today’s public forum is like being accused of communism in the 50s…The entertainment industry, formerly known as the news, needs villains.’ You don’t need to have seen Trumbo to question this comparison.

Just as we are reeling from this statement, Zahler muddies the water. Calvert also concludes that the pair were using undue force and tells Ridgeman that it is his lack of ‘perspective and compassion’ and not unfairness that explains why he has risen through the ranks while Ridgeman failed to progress. We are introduced to Lurasetti’s fiancée (Tattiawna Jones), who happens to be an educated, professional black woman with more brains than Lurasetti, who know it, and has just bought her an engagement ring.

might seem meandering, but is built on a tight structure, beginning and ending with Henry Johns, and filled with mirror images, or twinning. If Johns has a disabled brother, Ridgeman’s wife (a former cop) is disabled with multiple sclerosis. If Johns wants a better life for his young brother, Ridgeman and Melanie (Laurie Holden) want a better life for their daughter who is harassed by local thugs. While Melanie says, ‘I never thought I was a racist before we moved to this neighbourhood,’ her husband blames their location on his ‘shitty pay’ not his conduct. Meanwhile Johns needs quick money to get his mother and brother out of his ‘shitty neighbourhood,’ too.

Just as Ridgeman convinces Lurasetti to join him in his misguided plan to rob a money laundering criminal he learns about in a tip off from Friedrich (Udo Kier, 74), so John’s best friend, Biscuit (Michael Jai White) proposes a one-off job to solve their financial problems. They are hired help rob a bank and drive the getaway vehicle for a sadistic, armed masked robber, who happens to be the very criminal that Ridgeman and Lurasetti are staking out. That we never see the masked killer, Lorentz Vogelmann (Thomas Kretschmann) who lords over so much death, is just as significant as is the fact he, like Friedrich and the drug dealer, are immigrants. 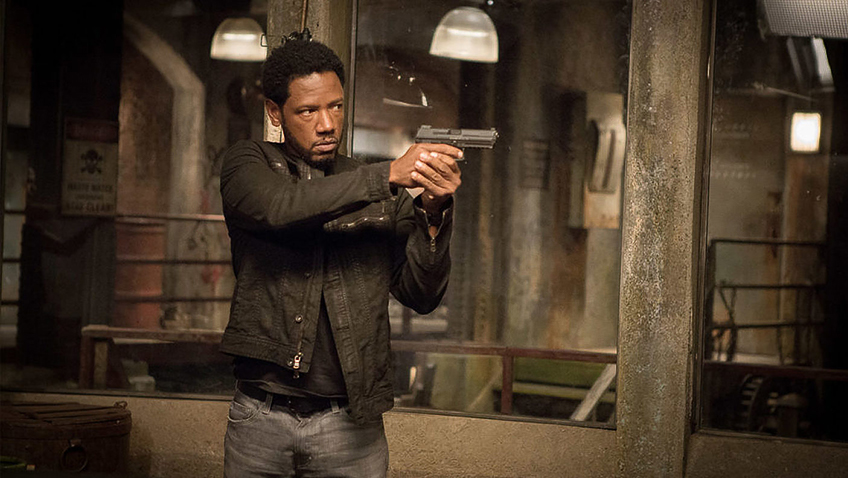 Tory Kittles in Dragged Across Concrete

What is equally objectionable, but not part of the controversy, is using disabled loved ones as a tacit justification for committing an allegedly victimless crime, such as a bank heist. We are more sympathetic because of this, but it is clearly no excuse.

The stake-out of the elusive Vogelmann is pure Zahler. Whether or not his aim is to recreate the uncomfortable, boring life of a city cop by forcing us to sit through five minutes of screen time watching Lurasetti eating a sandwich in the claustrophobic car that has become home, the artistry is in the editing and the conversation.

It is little wonder that all three films have been edited by Greg D’Auria, and shot by cinematographer is Benji Bakshi, who, ironically, worked on several of The Fast and the Furious films. Zahler, who also wrote most of the film’s music with his real-life band partner Jeff Herriott, knows what he wants and works with others who do, too.

The signature kidnapping (it is always a woman) is another sequence that rolls out slowly but is so pregnant with tension that you can barely stand it. Yet, just as race and ethnicity come under the spotlight, so does gender. Kelly Summer (Jennifer Carpenter) plays a young mother whose well-meaning husband has to push her out of the house at the end of maternity so reluctant is Kelly to leave their baby to return to work. Work is no place for a new mother; especially if she works in a bank.