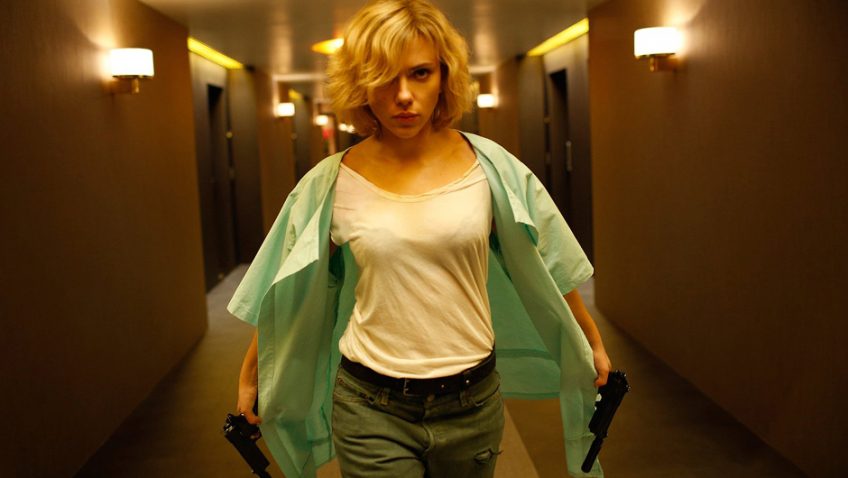 A fast paced thriller with Lucy

After Luc Besson’s breakthrough films in the 1980s, Subway and the Big Blue; and his best films of the 1990s, La Femme Nikita (1990); Leon: The Professional (1994) and the Fifth Element (1997), his star faded.  Since 2000, Besson has focused on producing, and occasionally writing, films for other directors, only a few of which are worth remembering.  Now Besson is back with his best film as writer/director/ producer since 1997: Lucy

is a cross between Besson’s superb La Femme Nikita, in which a pretty young criminal trades a prison sentence for a job as a government-run assassin, and Neil Burger’s Limitless, about a man who discovers a pill that maximises his brain’s potential.  We might wish for a different ending, but Lucy

is a fast-paced Sci-Fi thriller that is a lot of fun.

At 29, Scarlett Johansson cannot continue playing a student much longer. Such is Johansson’s talent, however, that we are ready to accept her as the eponymous American student living in Taipei. We are thrown in at the deep end when Lucy’s new boyfriend tricks her into delivering a briefcase to the boyfriend’s boss, Mr Jang (Choi Min-sik). Within minutes, Lucy finds herself surrounded by gunmen, drugged and turned into a drug mule working for the Korean mafia.  A little pocket has been surgically carved into her abdomen to hide a packet of an expensive synthetic drug called CPH4.

The only woman in a group of four mules who are sent off to Europe to deliver the parcels, Lucy is held alone in a cell where she is kicked by her sadistic captors. The bag breaks and some of the CPH4 finds its way into Lucy’s bloodstream.  It will kill her, but first it will transform and empower her. Using her sex appeal to disarm and kill a guard, Lucy escapes to a hospital where she forces the astonished surgeons to remove the remaining drugs without putting her under anaesthetic.

While Lucy’s ordeal is unfolding, visiting lecturer Professor Norman (77-year-old Morgan Freeman) is entertaining a packed house at the Sorbonne with his discourse on the human brain.   With the exception of the dolphin that uses a whopping 20% of its cerebral capacity, Norman tells his audience, man uses 10%, making humans superior to other animals.  Norman expounds on what life would be like if we could access 20% of our brain.  When a student asks what would happen with at 100%, Norman admits that he has no idea. But he is about to find out when, half-way through the film, a call is put through to his Paris hotel room from strange woman demanding an urgent meeting.  Norman is amazed when she tells him she has read all his work (the drugs have made her a quite a speed reader) and, that within 24 hours she will have accessed 100% of her brain.  Her aim is to reach Professor Norman before she expires in order to share her knowledge for scientific research.

Lucy has, meanwhile, tipped off the French police to the other drug mules despatched by Mr Jang so that they would arrest them and give her the confiscated CPH4.  While the drug is lethal, she needs it to prolong her life by a few hours. Lucy manages to get to Professor Norman with the help of French Detective Pierre Del Rio (42-year-old Amr Waked, the Sheik in Salmon Fishing in the Yemen), whose police car she hijacks.  Once he realises that this woman means business, he follows her instructions.

Besson’s economy of story-telling is exemplary. While any director could easily stretch the film out to two hours, Lucy

clocks in at 90 minutes.  The preposterous elements of the film are offset by an interesting scientific premise and the perfect casting of actors who make us care about the outcome.

Given her beauty and acting talent, it’s surprising that 7 out of the last 10 films from the ‘Girl with the Pearl Earring’ star are either action or Sci-Fi thrillers, or both.  From superhero movies like Captain America, Iron Man 2 and the Avengers, to modern Sci-Fi oddities like Jonathan Glazer’s Under the Skin and Spike Jonze’s Her, Johansson refuses to rely on her looks and instead convinces and captivates with effortlessly natural acting.  Besson needed an actress who could transform instantly from vulnerable victim to a bewildered, but self-possessed, determined heroine, and he found her in Johansson.

As the wise old man of the film who never thought he would live to experience the phenomenon on he has been lecturing for years, Freeman is appropriately low key, formal and authoritative. In his scenes with Johansson he is in awe of Lucy’s condition and humbled by this tragic woman’s courageous act.