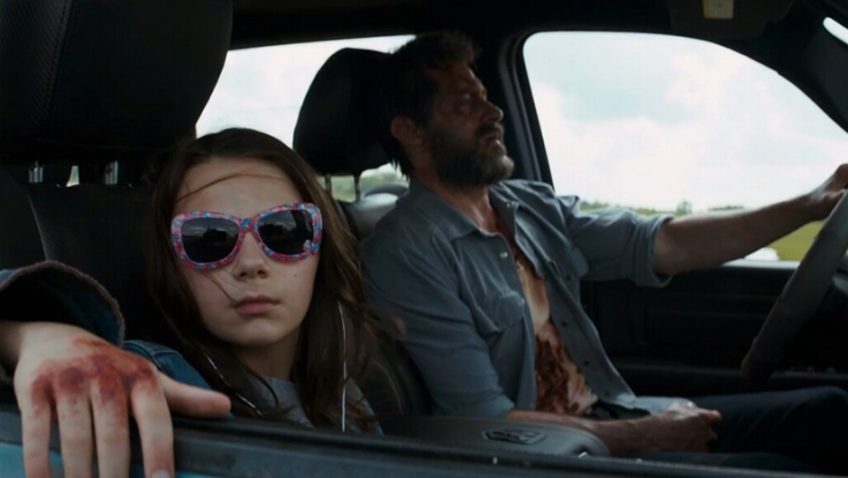 A classy ending to a romantic superhero’s journey

If more proof is needed that demographics are driving the film industry, here is a Marvel Comic blockbuster about two ailing, pill-popping, and vulnerable superheroes whose lives are fading away, along with their powers.  Surprisingly, too, the sprawling X-Men franchise – which has seen ‘Les Misérables’ star Hugh Jackman portray Logan the Wolverine 9 times in the past 17 years – has saved its best for last. There is an element of the formulaic in Logan

, but it is gripping, beautifully acted and sensitively written. More a family road movie than a deafening computer game, it’s the superhero movie for people who don’t like most superhero movies.

And who amongst us has ever imagined being able to identify with the Wolverine? Yet here we have Logan (48-year-old Jackman) pondering his immortality as he finds himself caught between nursing his father figure, Charles Xavier (76-year-old Patrick Stewart) and saving his 11-year-old daughter (the talented Spanish/American Dafne Keen, in her screen debut).  Just be forewarned.  This is more ‘Lethal Weapon’ than ‘Grumpy Old Men.’  While Logan starts out in semi-retirement, he is forced to get his claws out as Wolverine one last time and the carnage follows.

World weary, gloomy and drinking heavily to mask his increasing pain, Logan is  aware that the metal alloy Adamantium, that was bonded to his bones at ‘birth’ to give him self-healing powers and immortality, is not working. When he is shot by some thugs changing a tyre, it takes him much longer to heal, and the healing is not complete.  His knuckles are infected from the claws, making it painful to use them.

Keeping a low profile, Logan drives limousines to support a wheel-chair bound Charles and his alternate nurse, Caliban (Stephen Merchant).  After work, he drives to their hideout, an abandoned factory near an oil field along the Mexican border, to deliver illicit prescription pills and medicine to Charles, whose powers are going haywire.  If he has a seizure, everyone around suffers from paralysis, drawing unwanted attention to their whereabouts.  The equally despondent, light-sensitive albino Caliban knows that Logan is saving up to buy a boat in which he will sail away to the sunshine with Charles.

It is 2029 and there hasn’t been a new mutant in the world in the past 25 years, or so Logan believes. Charles Xavier (Professor X), however, knows better.  Logan mistakes Charles’ babbling about a little girl as another sign of dementia. Then one day, Laura (Dafne Keen), the Mutant girl whom Logan hoped did not exist, shows up at the hideaway, but she isn’t talking.

Laura has that calm in the face of danger that comes with confidence in one’s abilities; yet her shifty dark eyes are never still.  As she sits down to breakfast, the film’s main villain, Donald Pierce (Boyd Holbrook), the psychopathic engineer and Head of Security at Transigen, arrives in hot pursuit.  Transigen, as we are reminded, is a project created by the American corporation Alkali, whose object is the destruction of all Mutants.  What Logan and Charles learn from a brave former laboratory nurse Gabriella (Elizabeth Rodriquez) is that Transigen had been experimenting with a group of children to turn them into killer soldiers. But as they grew to be Laura’s age, they became uncontrollable and refused to fight.   Transigen started to eliminate the children, but Gabriella helped some to escape, including Laura.  Laura now needs Logan to take her to a safe house in the mountains where she will escape across the border to North Dakota with the surviving children. Logan is a reluctant guardian. He is tired of running and warns Laura that, ‘bad shit happens to people I care about.’ Laura, sensing his indifference, snaps back, ‘then I’ll be fine.’  But after witnessing Laura take on Pierce’s army of corrupt Mexican police, he starts to believe that she could well share his genetic code.

With seconds to spare, Logan, Charles and Laura pile into the bullet-holed, battered limo and set off on an action-packed road trip to reunite Laura with her peers.  Logan wants to believe that there is an Eden for this mute (or so he believes), girl who was born without a birth certificate and grew up without love.

James Mangold (The Wolverine, Walking the Line), who co-wrote the screenplay with Wolverine co-writer Frank and comic book writer Michael Green (Heroes, Green Lantern), cheekily introduces the X-Men comics into the plot. Finding several comics in her belongings, Logan confronts Laura as she relaxes with Charles, happily playing grandfather, in their hotel rooms.  ‘Is this what you read in your spare time? This is bull…People die in real life,’ he points out. This has never bothered Logan before as he, and rather frustratingly, his enemies, were invincible. The comics play another, clever, role in the film.

It is Laura who interrupts the unsatisfactory, but relatively safe life that Professor X, Logan and Caliban had been leading.  The intervention of a child-in-peril into the solitary lives of flawed heroes is, if not a cliché, then a staple of many an action/fantasy/sci-fi film.  It goes beyond a father saving his actual daughter, as with Liam Neeson in Taken or Mel Gibson in Blood Father when the child is not only a stranger, but ‘special’.  In Mercury Rising, Bruce Willis saves a nine-year-old autistic savant; in Terminator 2: Judgment Day, Arnold Schwarzenegger sacrifices his life for Sarah and her sought-after son, John; In Safe, Jason Statham takes Chinese maths prodigy Mei wanted by the Russian mafia, under his wing.

As in these adventure films, Laura brings not only redemption but the emotion behind the most touching, beautifully uttered line of any X-Men script: ‘So this is what it feels like.’  It is a testimony to the quality of the writing and directing, not to mention the classy acting that the Logan/Laura relationship rises above the cliché.

Dr Zander Rice (Richard E Grant), the jaded scientist behind Pierce and the child-farming laboratory, has had a grudge against Logan since X-Men Apocalypse. He is a one-dimensional and familiar villain, but the superheroes need a match and he’s the devil incarnate. The violence of Rice’s drive to kill Logan and the children may put family viewers off, but it is balanced by the tenderness and humanity that characterise the film. Laura’s last gesture before heading to North Dakota is nothing short of poetic. And it is the perfect way to end a franchise character’s journey.