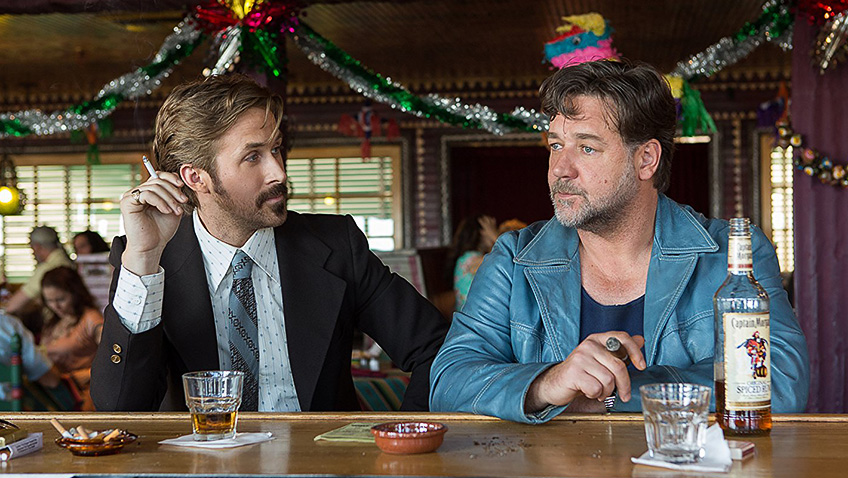 Shane Black, one of Hollywood’s highest paid writers twenty-years ago, left his mark on high-profile action movies from Lethal Weapon and The Last Boy Scout, to Last Action Hero and The Long Kiss Goodnight. He defined the 1980s and 1990s style with fast, furious chalk and cheese buddy movies, that had lots of cartoon violence, crazy plots, and even crazier, but basically noble and loveable, antiheroes. The hand of Joel Silver, the producer behind The Matrix, Predator and Lethal Weapon franchises to name a few, can be felt in every aspect of the film, including the imaginative pairing of Russell Crowe and Ryan Gosling. Silver last worked with Black on Kiss Kiss Bang Bang, which Black also directed.  Now the two have collaborated on The Nice Guys

, another zany neo-noir buddy movie that has Shane Black and Joel Silver written all over it.

Although there are few signs of it, the film is set in 1977, probably the last year you could go on the all day Raymond Chandler Tour of Los Angeles and still feel and see something of PI’s Philip Marlowe’s Los Angeles. The son of a publisher, Black grew up reading Dashiell Hammett and while the two eponymous detectives in his new film are not cops, they are clearly inspired by Hammett’s characters and by Chandler’s books. What is somewhat different is the style. A New York Times editorial claimed Hammett’s ‘stories were as consistent as mathematics and as intricate as psychology.  His gift of invention never tempted him beyond the limits of credibility.’

None of that applies to The Nice Guys

Naturally, there is an unemployed, divorced private eye, in this case, Holland March (Gosling), at the heart of the story. March receives a job offer that he can’t afford to refuse, despite his initial scepticism.  When we meet him, he can’t afford much of anything.

Misty’s aunt, Mrs Glenn (Lois Smith), claims that her niece cannot be dead because she saw her right after the alleged accident. March tries to tell her that the papers wouldn’t lie, but Mrs Glenn is insistent. She pays March to find her niece. March feels guilty taking her money, but that does not stop him from returning for more later on. Meanwhile, a missing girl named Amelia Kutner (Margaret Qualley), a younger, perhaps less curvaceous, but equally pretty version of Misty Mountains hired enforcer Jackson Healy (Crowe) to ensure she is not found. 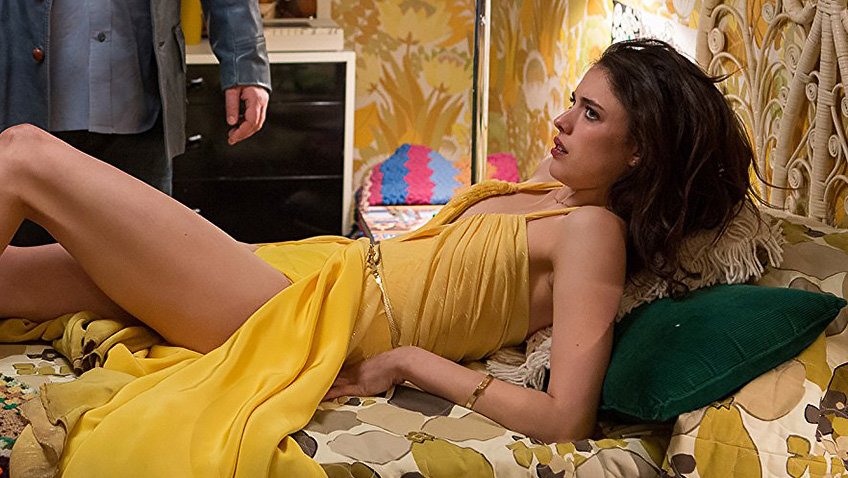 Margaret Qualley in The Nice Guys

But who is looking for her and why?  Well, as it happens, quite a few people and, apart from Holland March, who is aware of Amelia and suspects she is somehow involved, none of them are nice guys.

First come the thugs Blue Face (Beau Knapp) and ‘Older Guy’ (Keith David) who attempt to rough up and intimate Healy without much success. And then comes a psychopathic hit man named John Boy (Matt Bomer) who is far more effective. In terms of those looking for Amelia, singled out for special mention is her mother Judith Kutner (Kim Basinger) who brings with her not only glamour but the element of  corruption in the Department of Justice, where she holds a position of power. Basinger looks stunning, and while it’s great to see her back on screen, it’s a shame her roles these days are so limited.

It’s not long before March and Healy team up to find out who is making fools of both of them, not to mention threatening their lives. The two detectives first meet while March is on the toilet, a gun in one hand, and while the other is hiding his modesty behind a newspaper. It is an appropriate introduction. It also signals the beginning of Gosling’s terrific comic portrayal as a bungling PI with a drinking problem and a precocious 13-year-old daughter Holly (Angourie Rice) who is highly critical of her father’s tactics and dubious moral ethics. Gosling, playing against type (Only God Forgives, Blue Valentine, Half Nelson) is the perfect comic foil to Healy with his aggressive, street-smart approach and no-nonsense attitude towards his whimsical partner. 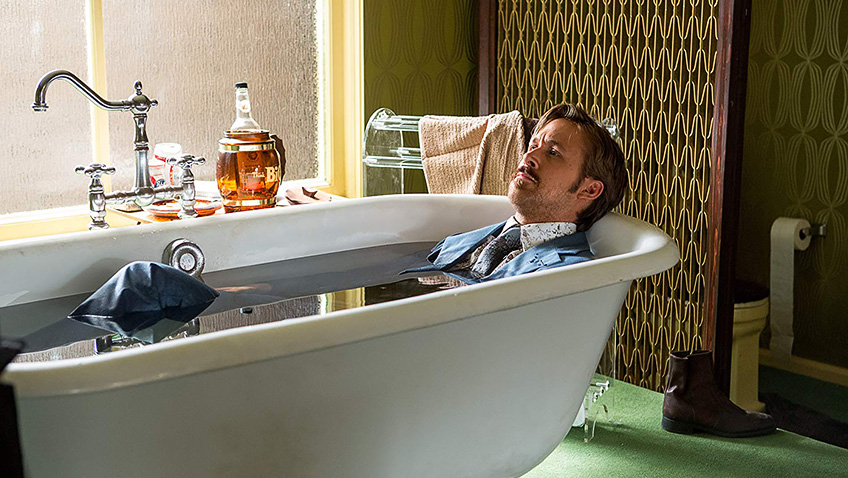 Ryan Gosling in The Nice Guys

The plot isn’t difficult to follow, but it doesn’t make much sense, either. Then again, that’s what they said about Raymond Chandler’s books. And the big discovery, what everyone is after is a pornographic informational film that hides a clue about City Hall corruption is pretty silly. Clearly, the plot’s not the thing; it’s all about the atmosphere and the characters. And they also said that about Raymond Chandler’s books.

The atmosphere, and in particular, the period feel, is less impressive than you might expect, however, with even the score presenting some anachronisms. That leaves the buddy element, and here the film comes into its own. Gosling and Crowe, with a little bit of help from Rice, carry the film and when they are together — the wise cracks and physical gags flying — you couldn’t care less about the plot. There is one exception. The big finale that makes the gun fight at the OK Corral look like a game of chess is uninspired. When compared with the big shoot-out at the end of The Long Kiss Goodnight, it’s clear that the filmmakers ran out of ideas.

Still, if you want an entertaining night out at the movies, you will have a lot of fun with The Nice Guys