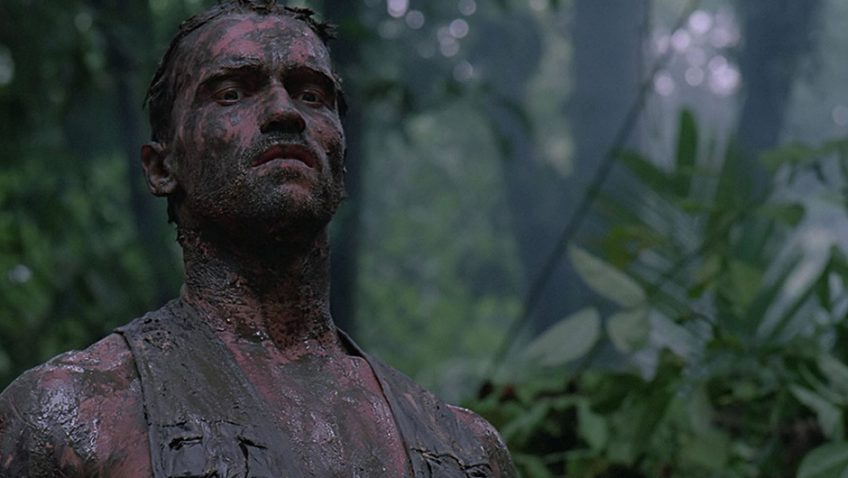 A classic re-issued for its 30th Birthday

If, like me, you wouldn’t miss a vintage Arnold Schwarzenegger movie, even on TV, you might be surprised to learn that his tense, sci-fi/action/horror movie Predator

, re-issued for its 30th birthday, did not make it onto the list of the top 10 highest grossing films of 1987. Predator

nonetheless made a fortune for its investors and was followed by two sequels and a revised critical consensus.

remains right up there with the ill-fated director John Campbell McTiernan Jr’s best: Die Hard (1988), The Hunt for Red October (1990) and Die Hard with a Vengeance (1995). And of course, Arnie is perfectly cast as Dutch, the savvy and professional leader of an elite US commando team sent on a suspect mission by a duplicitous (is there any other kind?) CIA director (Carl Weathers).

After his sparking success in Berlin and elsewhere, Major Alan “Dutch” Schaefer (Schwarzenegger) is welcomed as a hero among heroes when he is summoned to rescue a cabinet minister and other hostages kidnapped by guerrillas in some central American hell-hole (the film was shot in Mexico).

From the moment when the close-knit team is dropped by helicopter into the dense Val Verde jungle, the dumbfounded soldiers are faced with the fact that there is something other than blood-thirsty guerrillas in the jungle. It is nonetheless a while before Dutch’s most trusted man, the ace scout Billy (Sonny Landham) confirms that that something not human. In his review of the film back in 1987, Roger Ebert wrote that ‘Predator begins like “Rambo” and ends like “Alien” and in today’s Hollywood, that’s creativity.’ This might be because Stan Winston, the celebrated designer of the ‘creature’, happened to sit next to Alien director James Cameron on a plane trip to Fox studios after McTiernan requested Winston’s help on the film. But the cross-over plot and concept can be equally attributed to brothers John and Jim Thomas (Mission to Mars, Predator 2) who created the characters and wrote the taut script.

The real star of the film, however, is the Mexican jungle which, in Donald McAlpine’s cinematography, looks so authentic you might find yourself swatting flies and feeling uncomfortably clammy in the movie theatre. Conditions for the actors were bad enough to whip them into character, with several becoming sick from the food and McTiernan losing 25 pounds for fear of eating it. Kevin Peter Hall deserves special credit for playing the creature in such conditions. The filmmakers never bother to explain why an advanced form of extraterrestrial life, armed with technology to make him a super hunter – great agility and strength, infrared sensing devices and invisibility for starters – would spend its time in a relatively unpopulated jungle. Nor do we discover why he has it in for the hostages and Dutch’s team or why a creature who skins alive his victims would ‘respect’ Dutch enough to opt for hand-to-him combat rather than simply zapping him.

This is not really an issue while you are watching the film. For as the body count mounts and we lose the well-characterised team, man by heroic man, we have to focus on how Dutch is going to avoid a similar fate. If Dutch seems as super-human as the creature (after being shot in the arm and going over a huge water fall, he swims in the rapid current to shore), he also uses his brain and strategic training to build a trap for the creature, which is equally impressive. Fortunately, there is a lot of mud in a jungle river and when Dutch emerges from the river covered in mud, he inadvertently saves his own life. The creature’s thermo imaging powers are confounded by Dutch’s lowered body heat, and this ‘blindness’ gives Dutch an advantage.

The simple yet charged title is perfect because the predatory creature never seems sated, as though he is a sadistic killing machine or has a grudge again humanity that cannot be quenched. The predator and the jungle are the perfect challenge for Dutch, although without any food to sustain him through all of that action, let alone Dutch courage, you have to question whether Dutch isn’t an extraterrestrial, too.

McTiernan made his last film, the critically panned, financial flop Basic in 2003 at the age of 52. After that the director had to face his own demons when he was accused of perjury and fraud and of wiretapping the calls of Charles Rover, a co-producer of McTierman’s 2002 remake of Norman Jewison’s 1975 hit film Rollerball. In 2013, McTiernan was incarcerated for a year, during which time he lost his home and declared bankruptcy. As we are again finding out in headline after headline today, Hollywood is a dangerous jungle in its own right.