Home / LIFESTYLE / REVIEWS > / FILM REVIEWS / Arnie is back – along with Linda Hamilton – in this satisfying, feminist sequel 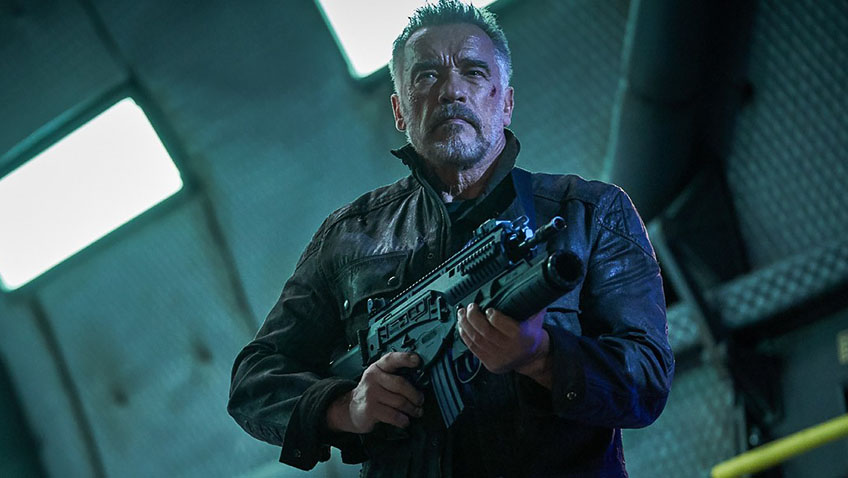 Arnie is back – along with Linda Hamilton – in this satisfying, feminist sequel

and its predecessors, and baby boomers will have no trouble traveling back to 1984 when The Terminator, James Cameron’s Sci-Fi blockbuster, launched the career of Arnold Schwarzenegger as a film star as opposed to a muscle man. In Stay Hungry and Pumping Iron, he posed. In Conan the Barbarian, he grunted. In The Terminator he was economical with words, too, but when he spoke, his deadpan delivery of the instantly iconic line, ‘I’ll be back,’ defined his screen persona.

Schwarzenegger has returned to cinema with mixed results (Terminator Genisys, Maggie, The Last Stand, Escape Plan, The Expendables 2) since stepping down as Governor of California. Now, at 71, he and 63-year-old Linda Hamilton reunite to save not only a new saviour of humanity against the machines, but to save The Terminator franchise as well. And James Cameron has returned, too, not as co-writer/director as in the original, but as an Executive Producer eager to erase from the record all the sequels but Terminator 2: Judgement Day. The good news is that to a large extent, they all succeed.

If you have been out of the loop since the 1991 sequel, Terminator 2: Judgement Day, and are concerned about not understanding this new film, don’t worry. Scriptwriters David S. Goyer, known for his work on Christopher Nolan’s Batman trilogy, Justin Rhodes, and Billy Ray, who wrote the screenplays for The Hunger Games and Captain Phillips, have made it easy to follow – or as easy as possible with people returning from the future to change the course of a character’s – fate.

Although the action is set in 2020, the film begins with a flashback to 1998, a few years after Sara Connor (Hamilton) saved her now teenage son John by defeating the AI organisation Skynet’s T-1000 killer machine. Mother and son are holidaying on a Mexican beach (ironically, for security reasons, filming took place in Spain) when suddenly a T-1000 looking a lot like Arnie, assassinates John. 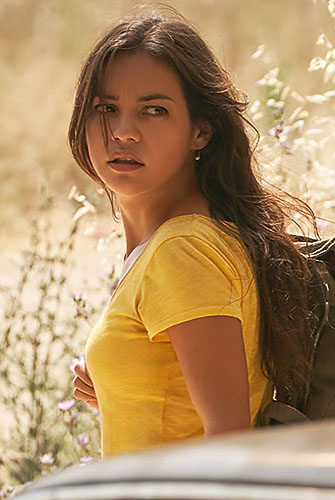 Okay, so it’s not the smoothest of transitions from Terminator 2: Judgement Day, but the filmmakers needed some motivation for Sarah, unencumbered with John, to become a machine-killing vigilante, the kind of hardened, devil-may-care veteran who has nothing left to lose, having lost the son she was supposed to protect.

In Mexico we meet bubbly, ordinary, young woman Daniella ‘Dani’ Ramos (Natalia Reyes), the woman of the house, cooking and organising her dad and old brother, Diego (Diego Boneta) before she and Diego head for the factory where they work.

Unbeknown to either, a Rev-9 machine has been sent to earth by Skynet’s replacement, Legion, to kill Dani. He lands in a wasteland on the outskirts of the city where a young couple are making out. This strange humanoid becomes their hero for a minute when he makes short shrift of meddling cops, until Rev 9 needs the boy’s clothes. At the same time a stark naked, cybernetically enhanced, androgynous, statuesque blond named Grace (Mackenzie Davis) is also sent to earth to prevent Rev-9 from killing Dani.

Rev-9 also has the ability, although this is nothing new, of transforming himself into someone else, and it is disguised as Dani’s father that he arrives at the factory, Grace whisks Diego and the hysterical Dani away, informing her unemotionally that her father is dead. The Rev-9 has to make physical contact with humans to assume their identity and he usually doesn’t leave them alive. The long vehicle chase produces a lot more victims than just Diego, but his death leaves Dani traumatised.

Just when things look hopeless, Sarah Connor (Hamilton) makes a heroic entrance, shot from the boots up as she steps out of her SVU with an enormous cannon-machine gun strapped around her. Echoing Arnie’s catchphrase, I’ll be back, she disappears. The three women later reunite in Sarah’s hideaway where she warns them about using phones, and other devices that the aliens use as tracking devices. 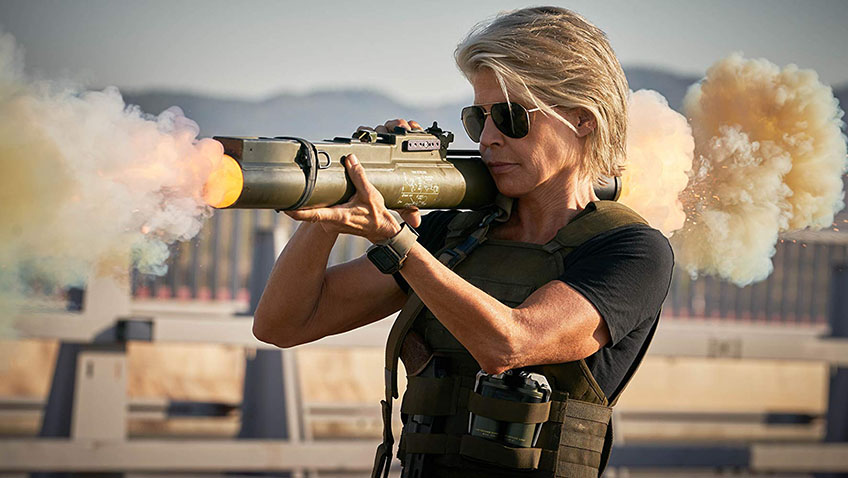 Eventually, Sarah and Grace realise that the source of mysterious messages that Sarah has been receiving for years, notifying her of the arrival of the Terminators and their location, is the same person as Grace’s contact on earth. Sarah’s messages are always signed, For John, spurring Grace on and, in this instance, enabling her to intervene and help Grace and Dani on the motorway.

Both women, but Sarah in particular, are in for a surprise when they show up at the remote cabin complex the woods that is Carl’s Drapery, replete with innuendo.

If the conflict sounds familiar, it is. You’ve seen it in all the Terminators, but this one has a trump card beyond the delectable triumvirate of Schwarzenegger, Hamilton and Davis (a terrific actress who appeared as the eponymous Tully alongside Charlize Theron, The Martian and Blade Runner 2049). If you haven’t realised it already, until Arnie shows up halfway through the film, the three protagonists are women, and hardly the helpless sort. Moreover, T-800, ‘model 101’ has no monopoly when it comes to heroic self-sacrificial acts to preserve the human race. And if you are thinking that Dani is, like Sarah Connor, being protected as the mother of the son to be who will save the world (no religious references here), think again. Finally, a film that busts that sexist trope modelled pretentiously on the Virgin Mary. 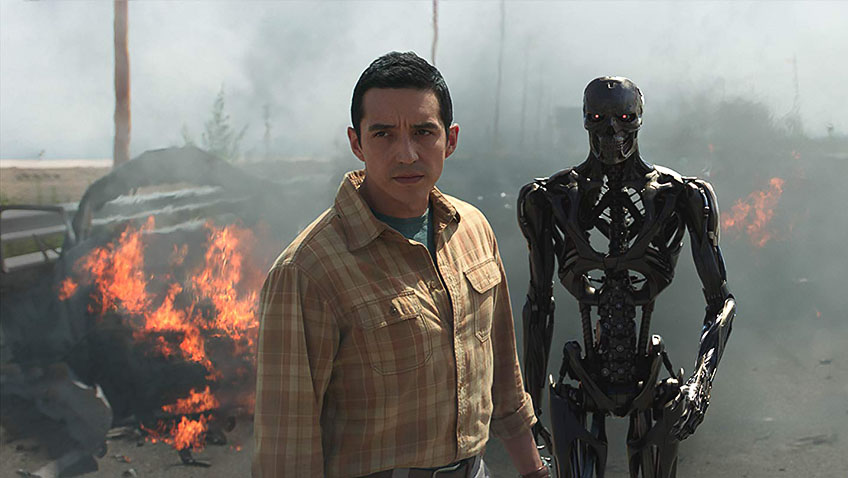 The indestructibility of the movie villain became a feature of the X-Men franchises and the Marvel comic films, but, as we saw in Avengers: Endgame, eventually even super-heroes die. One of the more tedious aspects of Terminator: Dark Fate

for older generations is the generous serving of battles with Rev-9 that become increasingly cartoonish, albeit extremely well executed and varied by director Tim Miller. Rev 9 is shot at, run over, blasted through space, crushed, and even thrown into a burning cauldron, but he gets back up and attacks anew.

Natalia Reyes, a star in her native Colombia, does not make the same impression here that she did in this year’s Birds of Passage and pales in comparison to her co-stars, particularly given her future role and her relationship with Grace that is explained in an epilogue. She has all the bravura lines, attesting to her courage, but somehow, they sound like movie lines. She might impress more in the sequel.