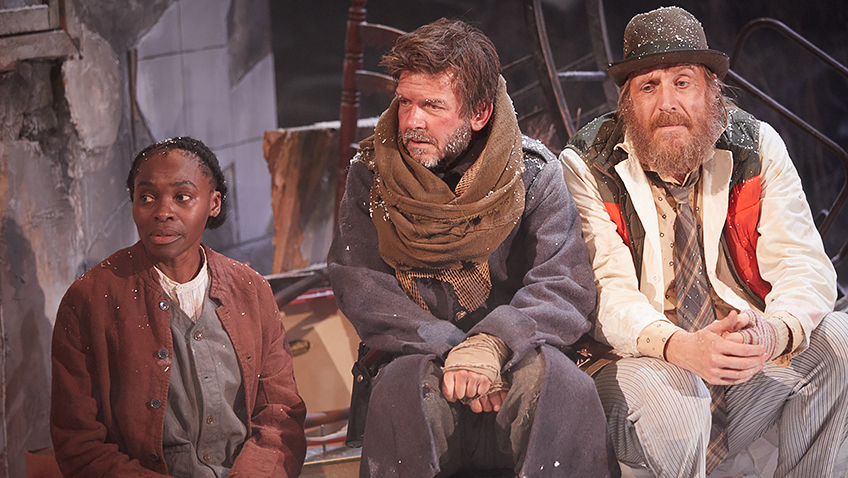 Are we really here or has the future already happened and we’re somewhere else? Nobody can be certain of anything. Anything can happen to anyone anywhere at any time.

Welsh playwright Ed Thomas has described On Bear Ridge, his bleak and very personal play, the first he has written in 15 years, as a love letter to his family.

The memoir, tragic and occasionally comic, is an elegy to time passing, remembering all that is, all that was, and all that will be. 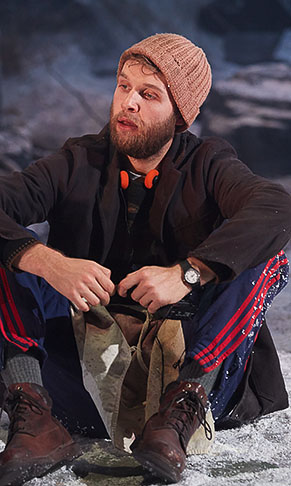 The production is a joint production between the Royal Court Theatre and National Theatre Wales where it premiered a couple of weeks ago.

Two war survivors, a defiant butcher (Rhys Ifans) and his defiant wife (Rakie Ayola) continue to live in an old abandoned shop in the mountains, miles from anywhere.

One minute they had customers buying meat, groceries and petrol; the next minute there was no-one. Where is everybody? No cars. No noise. No children. Everything is shut. Low flying fighter jets are screaming past overhead. Are they friends or foes? Is the war over?

The room is cold and empty but for a pile of chairs. The furniture is being burned to provide heat. As the play progresses the walls are lifted to reveal a desolate rocky landscape.

All the couple have is their love for each other and their memories of the world they once knew and the good times they had when their son was alive.

They feed on language. They love words. This is what the play is all about and championing: the safeguarding of language, a subject very dear to Welsh hearts.

The butcher, who tries hard to keep the corridors of his mind free, knows that only by remembering the past will he be able to continue to speak the language he spoke as a child and which is now dead.

The couple have a young assistant (Sion Daniel Young) who works in the abattoir and loves his job. He also loved their son who died a brutal death in the war.

Their lives are interrupted by the arrival of a traumatised army captain (Jason Hughes), who has a gun and is prepared to use it.

Ed Thomas’s powerful 85-minute play, excellently performed, is directed by Vicky Featherstone and Ed Thomas. It will be fascinating to see what Rhys Ifans does next. So many great classical roles are now open to him.