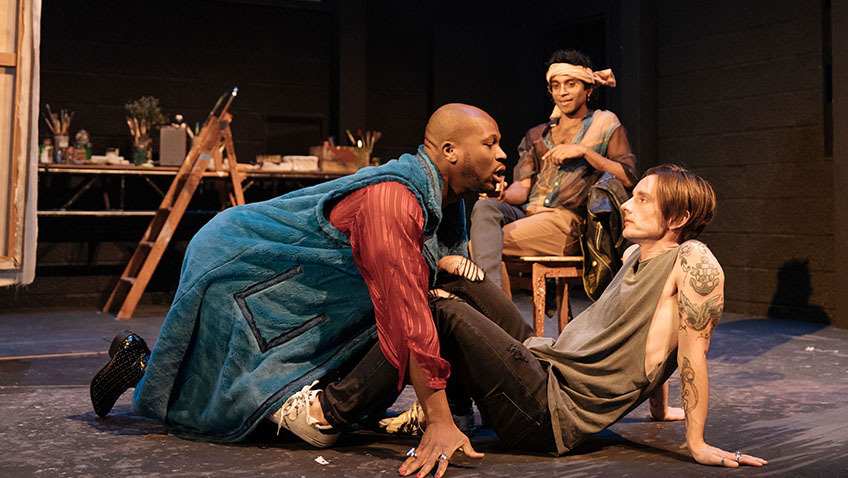 What do Donatello, Leonardo da Vinci, Botticelli, Michelangelo and Benvenuto Cellini have in common? Like so many Florentines in the last decades of the 15th century they were homosexual.

Canadian playwright Jordan Tannahill explores the contemporary present through events which took place in Renaissance Italy. He says he is seeking emotional truth not historical truth.

Botticelli (Dickie Beau), the most flagrant sodomite of them all, is putting the finishing touches to The Birth of Venus, a landmark in Italian painting and a sensation in its day in that it features the first non-religious nude since classical antiquity. 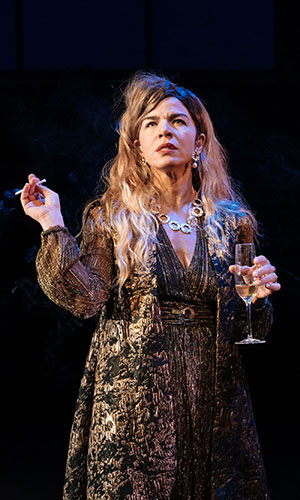 Sirine Saba in Botticelli in the Fire

The painting was commissioned by his patron, Lorenzo de Medici (Adetomiwa Edun). They play squash together and they have a great scene when he sees the painting for the first time and realises Botticelli has slept with his wife (Sirine Saba) who was the model for Venus.

Girolamo Savonarola (Howard Ward), Dominican friar and hellfire preacher, decides it’s time to have a clean-up in Florence and enforce laws which had sodomites castrated and burned to death.

Botticelli, who is in a relationship with his protégé, Leonardo da Vinci (Hiran Abeysekera), has to choose between his love for Leonardo and the survival of his art.

All these things were labelled as sinful earthly distractions for burning. Savanarola orders Botticelli to put all his paintings on the bonfire and renounce painting altogether.

Dickie Beau spends much of his time undressing and dressing and appearing unabashed in the nude. Louise Gold, playing his mother, sponges his naked body, and holds him in a position resembling Michelangelo’s Pieta.

The campest moment is when Venus, the icon of bewitching beauty and feminine modesty, is transformed into a cabaret artist (also played by Sirine Saba). Arriving on stage in a plastic scallop shell, dragged on by dancers, a spoof of Britney Spears and Work Bitch, she announces she is bored with being beautiful and says she would trade beauty for death in a heartbeat.