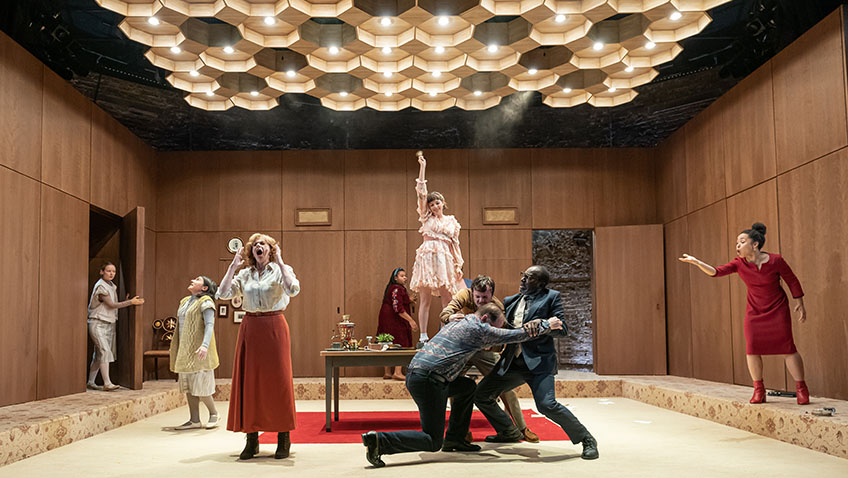 Vassa is an attack on the merchant class and show how their bourgeois materialistic attitudes destroy the family.

The revised version, radically different, written to appease the political authorities, was highly successful and performed by every major Soviet theatre.

Gorky died before he could see it. Claims that he was poisoned on Stalin’s orders have never been substantiated.

Sadly, you would never guess from watching this new and messy production, translated by Mike Bartlett and directed by Tinuke Craig, that the play was any good.

The actors, mostly miscast, seem uncertain as to what they are meant to be doing and struggle to get the tone right. The set is rows of doors which suggest we are in for lots of farce but the doors are never used in an effective farcical way.

Gorky’s plays, novels and memoirs are social commentaries on Russian working class life both before and just after the Revolution.

The failure of capitalism in this play is seen through the effects it has on one grotesque family.

Vassa (Siobhán Redmond), a ruthless and rapacious businesswoman, totally bankrupt morally and totally unsympathetic, is willing to embezzle blackmail, forge, even murder her dying husband, to save the family business.

She rules with an iron hand. She loathes her children and forced her eldest son to kill the illegitimate son he had fathered by one of her servants.

She threatens to put her younger son (Arthur Hughes), a snivelling, self-pitying, impotent cripple, into a monastery. He is married to a slut who is having it off with his alcoholic uncle. Hughes’s performance is one of the better things but cannot save this production.

The applause at the interval and at the curtain call was tepid.