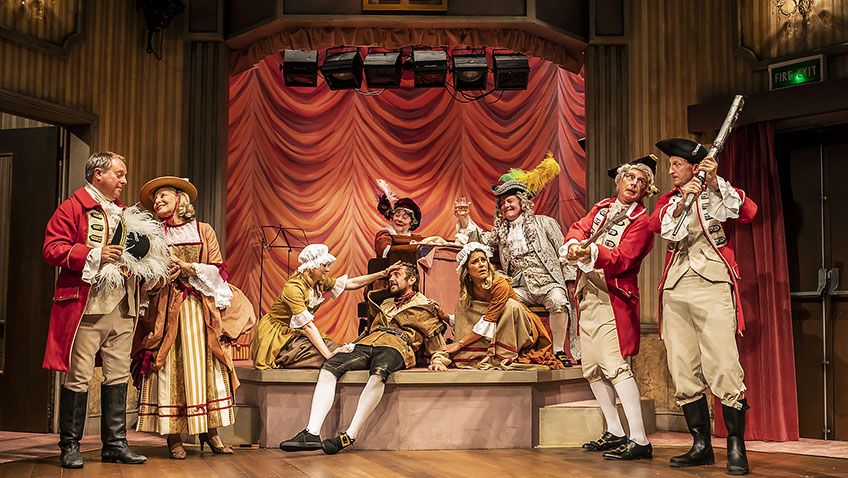 Ten Times Table is one of more than eighty comic plays penned by prolific playwright Alan Ayckbourn. It was written in 1977 for Scarborough’s Stephen Joseph Theatre during a period of conflict in left/right politics and one in which Ayckbourn was enduring many a pointless meeting, fraught with time-wasting procedures, personal problems and relationships, and inevitable clashes of views and personality.

It’s these elements Ayckbourn exaggerates and pokes fun at as a committee meets to plan and enact a town pageant for their Folk Festival. The chairman’s unwise choice of subject is the (alleged) massacre of the Pendon Twelve, in which the wealthy Earl of Dorset crushes the rebellious workers (or, as some see it: over-privileged toffs versus scum). In an old-style clash of the classes, the views of the disparate committee members range from extreme left to extreme right, with those of less emphatic views caught in the middle. 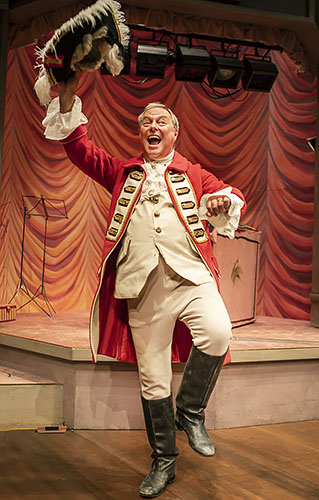 This particular Ayckbourn play disappeared from the stage several decades ago – and in this version we find out why. Throughout an overly long first act, in largely static scenes, the characters are seated at the big table of a cold, shabby hotel with tacky stage and wallpaper, and noisy (unfunny) interruptions. For those returning after the interval (and not all do) the mercifully short second act mainly comprises the chaotic costumed pageant.

Unfortunately, Robin Herford’s production largely fails to capture the right mood and therefore fails to move the audience in spite of boasting some fine, experienced actors. Robert Daws, stalwart of comic character acting (Sam in Roger, Roger, for example) brings Ray to life as the affable, talkative, enthusiastic chairman who’s completely at a loss when it comes to keeping order amongst his belligerent committee members, especially when one of them is his own wife, Helen, a blue-blood Tory, played loud, imposing and intolerant by Deborah Grant (Lucy’s mum, Wendy, in Not Going Out).

Alongside him Mark Curry strikes a good note as cheery, quietly spoken Donald the Councilor, the annoyingly meticulous stickler for detail and protocol, and caring, concerned son to his aged mother whom he wheels in to act as secretary and pianist. The half-deaf octogenarian is played wonderfully by Elizabeth Power, the audience fully warming to her most enjoyable character. Robert Duncan – he of the commanding voice that once characterised Gus in Drop The Dead Donkey – plays hard-drinker Laurence but it’s a role that gives him nothing to get his teeth into, while bold Harry Gastelow is the stereotyped Tim, loony, ex-military, dog-breeder madman.

Lefty teacher and Marxist activist Eric proves the biggest problem. Seemingly played by fictional character Graeme Proctor (formerly of Corrie) as much as by actor Craig Gazey, Eric’s more of a wet wimp with wispy, ineffectual delivery than a strong activist believer. Even if intended to be a tad Corbyn-esque, this doesn’t work at all, especially in a 1970’s setting. That this Eric would have two “groupies” fawning over him when there’s a total lack of meaningful vibes or interactions between any of them is the biggest mystery of all. 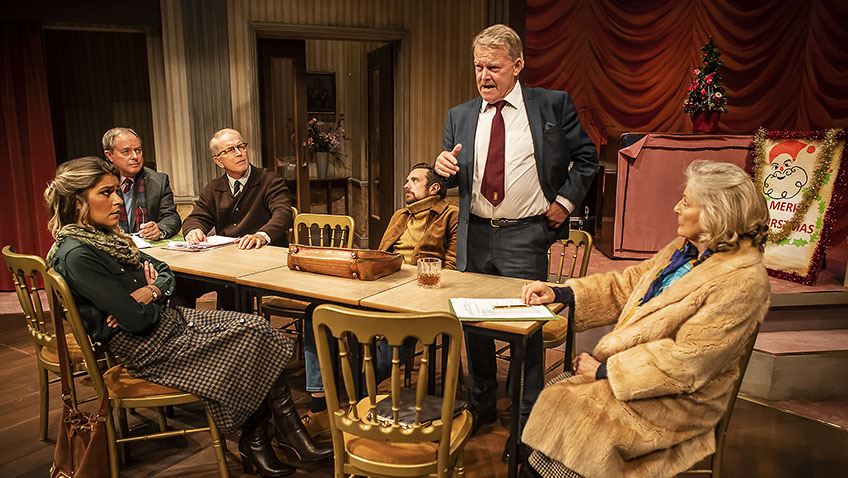 The cast of Ten Times Table

Though all starts out gently interesting and amusing, things do teeter dangerously on the boring before eventually descending into the downright bonkers. The lack of overall gel, conviction and believability in the relationships may end up causing frowns where there should be smiles, and some people – even those who generally love Ayckbourn’s work – may well leave the theatre somewhat bemused, bothered and bewildered.