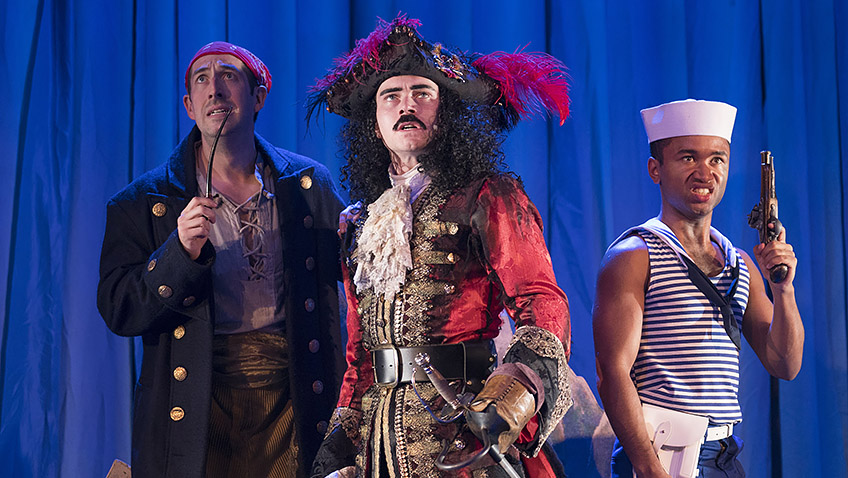 A barmy comedy at its tip-top best

For those who love nothing better than to laugh themselves silly, a play from the award-winning Mischief Theatre Company is the tickliest of the cat’s whiskers. These masters of orchestrated, non-stop mayhem, chaos and supreme silliness can rarely be faulted when it comes to getting everything absolutely right in order to have everything go disastrously wrong. Each split-second of misfortune, merriment and mishap has been honed to mega-meticulous perfection (well, give or take!) creating creative, barmy comedy at its tip-top best. What’s more, it’s a real treat to see so many delighted youngsters in a theatre audience. 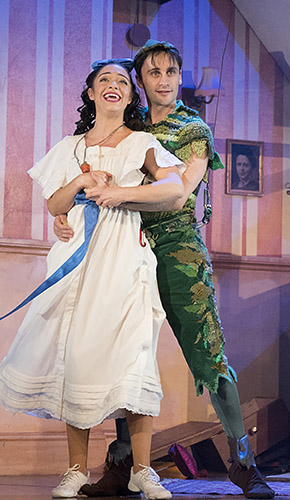 In this particular comedy of endless errors, it’s Cornley Polytechnic’s amdram Peter Pan that goes repeatedly, relentlessly and massively wrong. It’s been doing that since 2013 – and all in hilarious style. Ridiculous hitches, glitches and catastrophes fall one over a dozen others as wayward soundtracks kick in, electrics spark and bang, and Cornley’s amateur players, as keen as misguided mustard, miss cues, get confused, fluff lines, trip, slip, flip, fumble, tumble, bash and crash their way through a fast-paced slapstick romp of utter incompetence. And of course, no prop or component of the ingenious set is ever going to behave itself.

Without the linear story and intrigue of a murder mystery or robbery, this show is, perhaps, slightly lumpier and less perfectly slick in places than The Play That Goes Wrong (2012) or The Comedy About The Bank Robbery (2016), yet it’s still deliciously funny. Like the audience, the cast seems to enjoy all the farcing about. Yet the cast and crew’s boundless energy, exuberance and enthusiasm belie the serious skills required in the timing and crafting of every detail, both onstage and behind the scenes. Only cartloads of invisible spadework from actors and technicians can achieve such nonchalant mastery (for the most part!) of whirling words, physical disasters and injury-defying acrobatic antics. As the stage revolves at an increasingly frenzied pace, carrying Darling bedroom, cut-out woodlands, lagoons and ocean with it, a frantically pitching, lurching pirate ship proves no place for amateur actors, let alone one in a wheelchair.

Weaving the calamitous goings-on together with cohesive interest are the over-the-top quirky am-dram characters themselves with their failings, ludicrous past tragedies, ego clashes, backbiting, fighting, flirting and carrying on. All are played beautifully and all endearing. 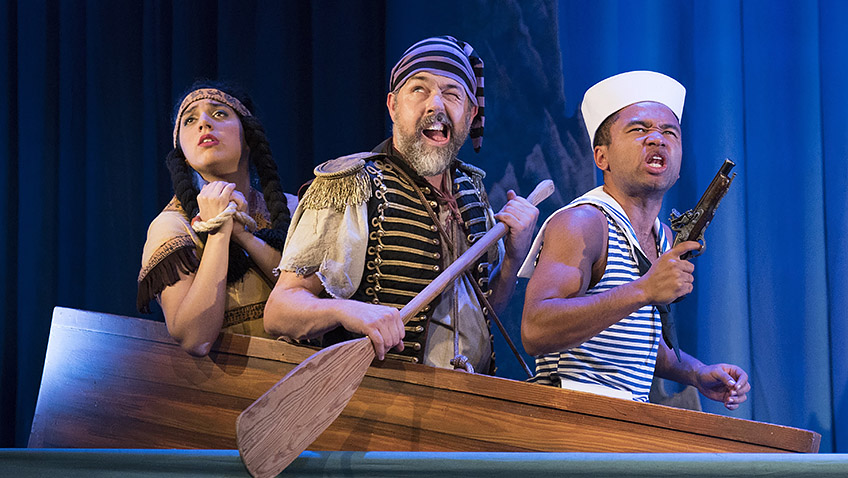 Romayne Andrews is Cornley Poly’s Dennis. As John Darling, Smee (and a mermaid), poor Dennis can’t remember a single line so has words fed to him via cards and headset. Alas, he repeats all he hears or sees, be it shipping forecast, Classic FM or personal conversations and criticisms from stage hands. Oliver Senton is hearty and impressive as Cornley’s Assistant Director (or Co-director as he would have it) and as hairy Nana the Dog and Peter’s bearded Shadow.

Quick changes come for Phoebe Ellabani as Mrs Darling, maid Lisa, Tiger Lily and the electrocuted Tinkerbell, revived only because all the audience believes in fairies. Pompous director Chris Bean (Connor Crawford) may protest this is not a pantomime yet he’s royally hissed and booed as the dastardly Captain Hook and loudly informed that Peter Pan is behind him. The ah-factor crocodile-on-a-trolley wins every single heart, of course, Tom Babbage employing his winsome, melting smile as Cornley’s maligned Max who also plays naive, young Michael (aged 4) – and a mermaid.

Since Henry Lewis, Jonathan Sayer and Henry Shields came together on the fringe in 2008, the enthusiasm and ingenuity of their writing has blossomed through the plays that now go wrong all over the world as well as in the recent TV series in which they star. Long may their uproar of inventive wit and hyperactive silliness continue!

The show tours next to Milton Keynes, Edinburgh, Birmingham and Coventry. As ever, royalties from all Peter Pan adaptations will benefit Great Ormond Street Hospital. 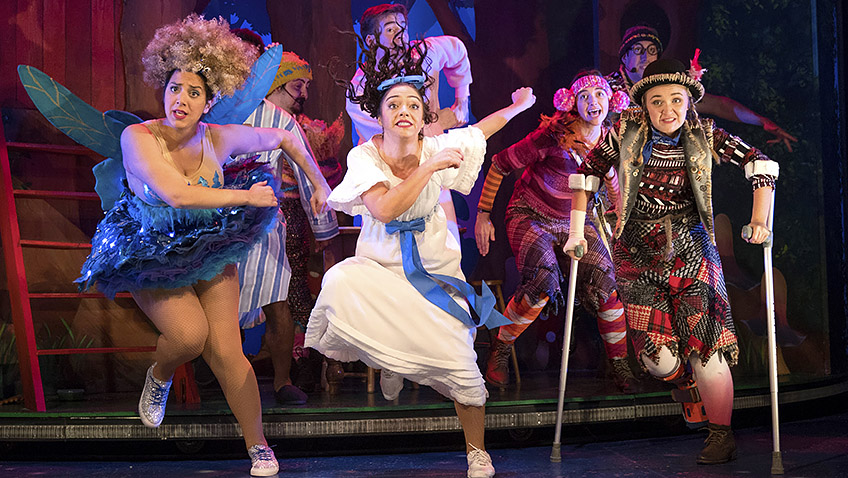