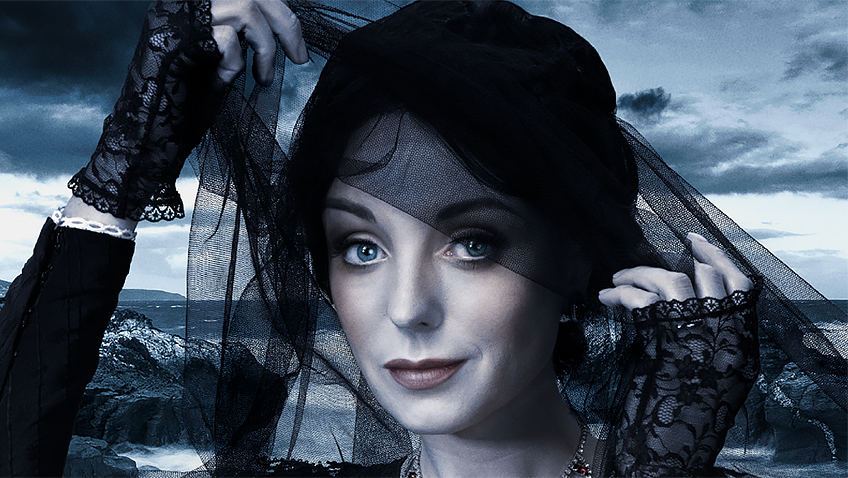 The finely crafted mystery romances of Daphne Du Maurier such as Rebecca (1938) and My Cousin Rachel (1951) are full of twisting intrigue, ambiguous suspicions, hidden truths and self deceptions. The magnificence of their thrill and chill is owed largely to the subtle, enthralling psychological drama that gradually unfolds between characters as they react, interact and develop.

, unlike the novel, relies less on conveying the whole emotional journey solely via words and characters, bringing in music and sound effects a-plenty plus visual dramas of smoke, mists and an impressive, imposing set. A silhouetted rocky seascape viewed beneath a tall, elegant metal stairway evokes beautifully the wild Cornish coast and the mansion on it, a clever rotating set taking us from grand fireplace to the outside.

Storms lash, gulls cry, carols and folk songs are sung, a distorted Jerusalem rings out. There’s plenty going on. When used more subtly the sounds and music work well, but it does get somewhat heavy-handed at times, especially when the music swells into over-the-top, melodramatic overdrive towards the rather hurried end. All the same, foremost in creating uneasy mood and an uneasy sense of suspicion and potential menace must be the characters and words. Audiences, like readers, need to be carried along with the emotional twists and turns of the characters. No mean feat!

Helen George (midwife Trixie Franklin on TV) plays Cousin Rachel, the exotically beautiful Italian countess whose Cornish husband (and cousin) Ambrose has recently died at their home in Italy. His younger cousin and ward, Philip, is full of suspicion about Ambrose’s death and about the character and motivations of Rachel – until he meets her when she arrives at Ambrose’s Cornish estate. But is Rachel as innocent as she seems, or is she, after all, nothing but a scheming manipulator, a cunning murderess even? It’s this uncertainty and ambiguity that form the thrust and drive of the story.

Rather than portraying the stately, formal elegance, imperiousness and alluring, exotic charm of a nineteenth century Italian countess, Helen George brings us a Rachel who is strong, strident and busy. The clipped tones of her variable broad-spectrum-European accent not always easy on the ear, and hints and glimmers of a potential dark, scheming side don’t shine through enough. As he tries to work out the truth about Rachel, Jack Holden’s naive, young Philip lurches between grief, anxiety, mistrust and suspicion – which he expresses wholeheartedly – to love and infatuation, which he expresses less convincingly. But the pair work hard and do enough to maintain interest right through, while there are engaging performances from the likes of Sean Murray as faithful servant John Seecombe, and Andy Hawthorne who, as understudy, plays Philip’s avuncular godfather, Nicholas, a wise, reliable man with a light side, too.

While this psychological thriller lacks a desirable, razor-sharp emotional edge and a sense of knife-edge ambiguity, and although the shorter, second act comes in a rush, it’s still a compelling tale.

The show tours next to Chichester and Richmond.