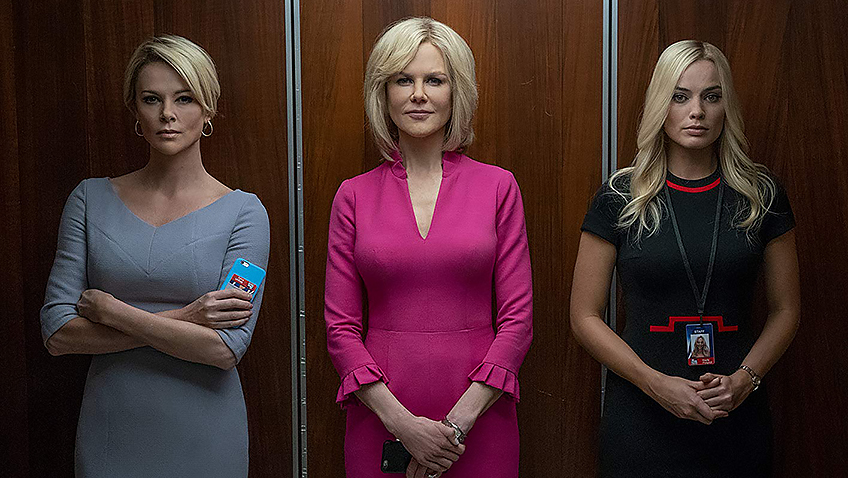 has more selling points than you can count on one hand, and that’s not just because it is topical, recent history, centring on a sexual harassment lawsuit in the media that predated Harvey Weinstein’s by two years. Nor is it just because, in contrast to the Weinstein saga, the female witnesses against the creator and CEO of Fox News, Roger Ailes (John Lithgow, superb), received satisfaction and relatively quickly. News and sex are a Twitter world’s candy, and sure enough the setting is a high-profile newsroom, where news is sold by women with long, shapely legs and Ivy League degrees, like the enticing investments sold off in scriptwriter Charles Randolph’s (written with its director, Adam McKay) Oscar winning, The Big Short.

This conceit is dramatised in arguably the best scene in the film, when Ailes pays a visit to his boss Rupert Murdoch (Malcolm McDowell), hoping for mercy: a resignation rather than a sacking and a dignified goodbye to staff. After all, Ailes has been loyal and has made Murdoch a fortune. But when Ailes, probingly, ponders whether any of his accusers really have suffered any long-term damage, Rupert cuts him off with the best line in the film: “There’s no audience for that side of the story”. The filmmakers must have been thinking along similar lines in selling tickets to a reconstruction of a scandal because there’s an audience ready to lap it up.

Randolph and director Jay Roach (of Austin Powers and Meet the Fockers fame) bring The Big Short’s cynical, chaotic and fast paced style into the Fox Newsroom which is turned into a stock market trading floor. And if that doesn’t sell the film, a scene in which the three stunning victims of sexual harassment, Charlize Theron, Nicole Kidman and Margot Robbie silently share a lift, each wondering if the other will talk, certainly should. This is the post #MeToo version of the 1980 film Nine to Five, in which Jane Fonda, Dolly Parton and Lily Tomlin take revenge on their sexist boss. If you prefer Nine to Five as entertainment, you may not be alone, but it may date you.

Although certain audiences will remember blond bombshell Margot Robbie explaining sub-prime mortgages in her bubble bath in The Big Short, here, it is the film’s co-producer, Charlize Theron, as Fox megastar Megyn Kelly, who breaks the fourth wall, addressing the audience with a mockumentary tour of her kingdom. It doesn’t really work, but we can admire Theron’s figure in her form-hugging dresses. Kelly, and Nicole Kidman’s Gretchen Carlson, who risked her career suing Ailes after he fired her, are real people. But just as Fox news delivers a mixture of fact and fiction, Robbie’s character, Kayla Pospisil – the ambitious starlit whom we see being sexually abused – is pure fiction. 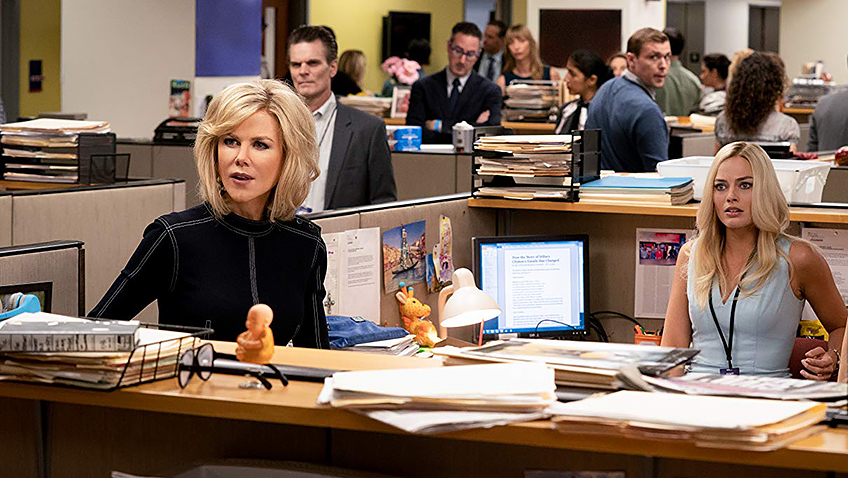 That is not to take away from the harrowing scene where Kayla-everywoman blags her way into Ailes’ office, thrilled that he seems to be listening so attentively and taking her seriously, only to be asked to do a little twirl – his way of auditioning female presenters. But who amongst us will not squirm when Kayla thanks Ailes for complimenting her legs, before being asked to raise her dress higher, and then a bit higher, to prove her loyalty to the man who will make her a star?

If the fourth wall-breaking is minimised here, Randolph persists with the unwieldy procession of supporting characters sporting dizzying captions with their names and positions, as though we can actually remember who is who ten-minutes later. We do remember Allison Janney as Susan Estrich, Roger Ailes’ lawyer, but can anyone remember all the other lawyers or the PR women supporting Ailes? 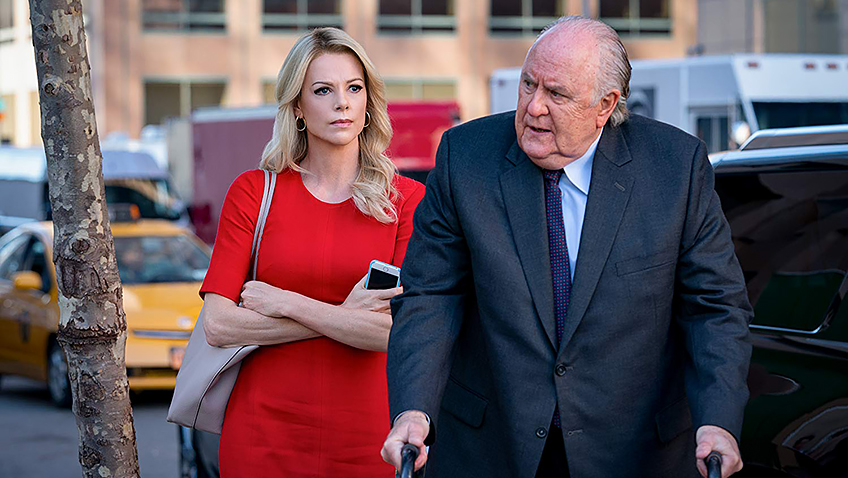 Kayla ends up suffering from a mixture of humiliation, anger and resentment, while still holding out hope of a promotion that her legs rather than her brains have earned. She seeks solace, platonically, in the bed of colleague Jess Carr (Kate McKinnon), a left-wing lesbian who hides her political leanings, along with a desk photo showing her and another woman in a loving pose. But when push comes to shove, Jess cannot afford to go out on a limb for anyone for she somehow loves her job.

Gretchen and, of course, Megyn get their own subplots as well. It is Gretchen, Carlson (Kidman) who courageously starts the ball rolling, cleverly suing Roger Ailes personally rather than Fox and in the New Jersey Superior Court (where he had a home) rather than New York, alleging she was sacked from her daytime show, The Real Story with Gretchen Carlson for having rejected Ailes’ sexual advances. Gretchen was moved from Fox and Friends to The Real Story and used the platform to talk about personal issues. In her final programme, she goes on air without make-up, showing how a middle-aged woman really looks. 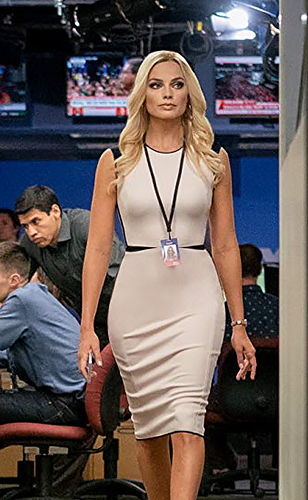 Gretchen, a combination of brains and beauty, was prime Fox News stock. A former Miss Minnesota and Miss America, she graduated from Stanford and was snapped up by a CBS affiliate station where she became the first woman (with a colleague) to co-anchor a primetime major-market news programme. But in 2016, she was 50, and had proven disloyal by not humouring Ailes, the fat, arm-chair pervert with a sense of humour, brilliant mind and a cunningly sincere manner. She settled for $20 million, but you have to wonder why she didn’t also sue for age discrimination.

Megyn Kelly’s story might have the most screen time, but it is almost a film in itself and, like Kelly’s position in the case (she drops the biggest bombshell but will not join the class action lawsuit) it is slightly ambiguous. Kelly, a brilliant, tough lawyer before joining Fox, dares to challenge Presidential candidate Donald Trump about his sexist actions and statements and is defiant in the face of his sexist tweets. For Megyn, sexual politics “trumps” Fox News’s typically right-wing politics, and the backlash comes. But when she gives a more conciliatory interview later on, Megyn’s own husband (Mark Duplass) criticises her for letting him off the hook. A survivor and realist, Megyn knows that she will need to gain access to Trump when he becomes President but is nonetheless accused of partiality and selling out.

Charlize Theron is the female equivalent of Peter Sellars, able to change her looks so drastically that she is barely recognisable. This is the statuesque government agent of Atomic Blond; the serial killer Aileen Wuornos of Monster; the heavily pregnant, depressed housewife in Tully and the heavily armed war captain Imperator Furiosa in Mad Max: Fury Road. As well as walking and talking like the real Megyn, Theron sat in the hair and make-up chair three hours a day. When we look at Kelly or Carlson, we see faint vestiges of Theron and Kidman, but that’s just fine. We’ve all been there.