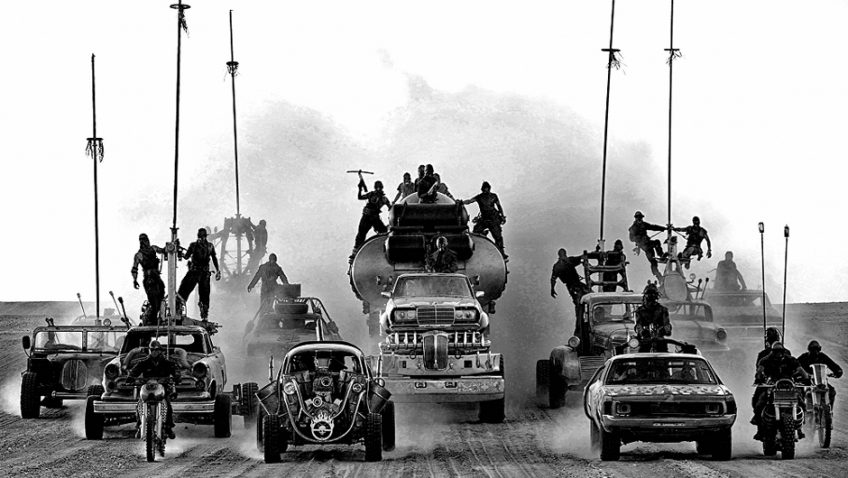 For those who saw Mad Max: Fury Road in 2015 and are still recovering, there’s a good excuse to return to the cinema from April 30 when 72-year-old George Miller’s Academy Award nominated blockbuster returns for a limited theatrical release in a black & chrome format, the director’s preferred version. If you cannot make it to the cinemas during the theatrical run of Mad Max: Fury Road Black and Chrome Version (and do try – this is a tour de force, and not just for young people) or if you want to have a souvenir, the black & chrome version will be available from 15 May in a special Blu-ray and Digital package or by Download. There are several features and add-ons for fans of the franchise, including an introduction from Miller, who has been living Mad Max since he was 34, in 1979 and the chance to see deleted scenes.

For anyone on the planet who doesn’t know, Mad Max is a 93-minute Australian dystopian action movie directed and co-written by Australian George Miller and starring Australian actor Mel Gibson. Such was its success in 1979, that the modest budget of A$400,000 yielded receipts of US$100 million and launched two sequels, in 1981 and 1985.

The two sequels had this in common: George Miller, Mel Gibson, cinematographer Dean Semler’s widescreen colour vistas of a vast, arid wasteland landscape; a lot of violence and the increasingly apparent theme of survival in a hostile, uncertain world.

In 2015, 30 years after the last sequel, (Mad Max: Beyond Thunderdome), Mad Max returned in Mad Max: Fury Road with George Miller still at the helm. Gibson, who is now 61, was replaced by a worthy successor: the great British actor Tom Hardy (The Revenant, Legend, Locke, Bronson). He was recently seen on television as the scourge of the evil East Indian Trading Company in Taboo.

Mad Max: Fury Road is set in a future desert wasteland where gasoline and water – not to mention arts and culture, health & safety and creature comforts – are scarce commodities. Max Rockatansky (Hardy) has been imprisoned and tortured by a frightening cult that has taken over a once-peace-loving oasis. Now the leader controls his starving people with water rations that flow for a few seconds from a water fall that operates like a tap.

Max is let out of the compound when, still in a metal head brace, he is strapped to the front of an armoured car dispatched to apprehend the Imperator Furiosa (Charlize Theron) who has gone rogue and is escaping in an armoured tanker truck. There is humanity in this brutal franchise, and here we find it with Furiosa, who is saving the lives of several beautiful girls. They have been used as sex slaves to provide future warriors to cult leader Immortan Joe (Hugh Keays-Byrne) and his coterie of goons, including The People Eater (John Howard) and The Bullet Farmer (Richard Carter). For nearly two hours we are gripped in the non-stop and highly inventive road battle that ensues when Max joins forces with Furiosa to save the women – and what is left of humanity. In addition to the impressive sets, costumes, vehicles (Jeremy Clarkson eat your heart out) and music, what makes Fury Road so memorable (and watchable) is the interaction of Imperator Furiosa and Max. What begins as an antagonistic relationship fueled by suspicion and Max’s single-minded mission of survival, turns seamlessly into a relationship of mutual respect, self-sacrifice and, yes, love.

There is a great moment when, with one bullet left to stop an enemy vehicle that will destroy the grounded truck, Max hands the gun to Furiosa, the better shot, and stoops down. Using his shoulder as a gun rest, she hits the target. In a moving scene at the end, Max, the man who would have left the women stranded to save himself, transfers his own blood to the dying Furiosa to save her life.

The film co-stars Nicholas Hoult (excellent as cult follower who joins the rebels), Rosie Huntington-Whiteley, Riley Keough, Zoë Kravitz, Abbey Lee, and Courtney Eaton. The mix of models and maniacs adds to the surreal feel of the film. The black & chrome version enhances the dystopian atmosphere and seems well suited to the Namibian, South African and Australian desert landscapes.