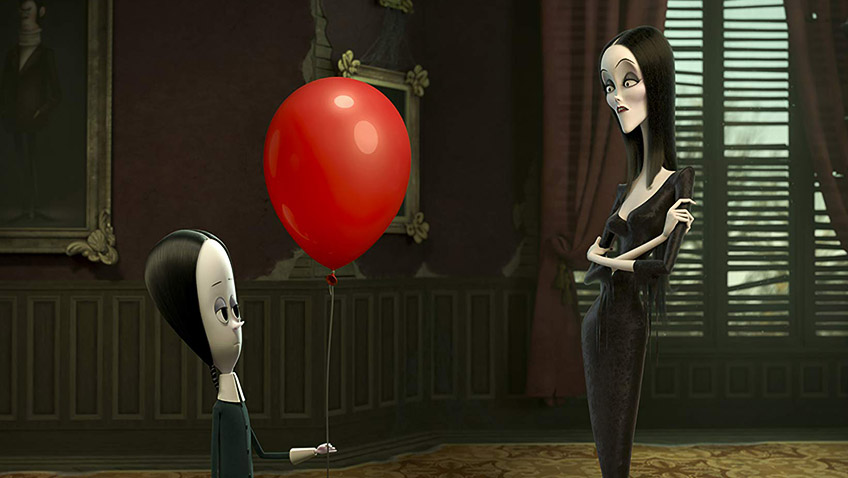 You are probably over 60 if you remember the live action television series The Addams Family from the early 1960s, although there was a revival in the 1990s and numerous animated versions for different media. Charles Addams’ cartoons about a weird, aristocratic family with European influences and a preference for the macabre was a satire on the white, healthy, squeaky clean all-American family that was the norm catered for by Good Housekeeping and the Saturday Evening Post. The cartoon ran in The New Yorker Magazine for 50 years, and though it was never overtly political, its inception in 1938 and the appearance of the television series a year after the last episode of Leave it to Beaver and the last issue of the Post, lent it a political subtext.

Although children will no doubt enjoy the film, particularly the explosives-expert Pugsley (Finn Wolfhard, the highlight of The Goldfinch), the jokes are too obvious for adult laughter, while the political message overwhelms the story. The political correctness of the second half introduce a degree of sentimentality that is not in the Addams family DNA.

In the promising opening segment, we see the Addams family dress for a marriage, rise from below the streets of a conventional European-style village and march toward the cemetery as the townsfolk slam their shutters. The wedding of Morticia (Charlize Theron, Atomic Blonde) and Gomez Addams (Oscar Isaac) is interrupted by a mob that has formed to chase them out of their God-fearing community.

Gomez and Morticia are heading ‘somewhere horrible, somewhere corrupt, and somewhere where no one in their right mind would go to’ – when suddenly a sign that they are entering New Jersey appears, one the film’s best jokes. They hit something on the road who turns out to be Lurch (Conrad Vernon). He leads them to the home he has haunted for years: an abandoned asylum, that the Addams instantly take to. Lurch, who looks like Dr Frankenstein’s monster, becomes the family’s butler and plays the piano with the assistance of the family’s dismembered hand.

Thirteen years later Morticia and Gomez have two children: Pugsley, who is supposed to be preparing for a coming-of-age initiation (a kind of dark arts version of Bar Mitzvah), to which all the family are invited. These will include Grandma, Bette Midler; Uncle Fester, Nick Kroll; Great Auntie Sloom, Jenifer Lewis; and hairy Cousin Itt (Snoop Dog). 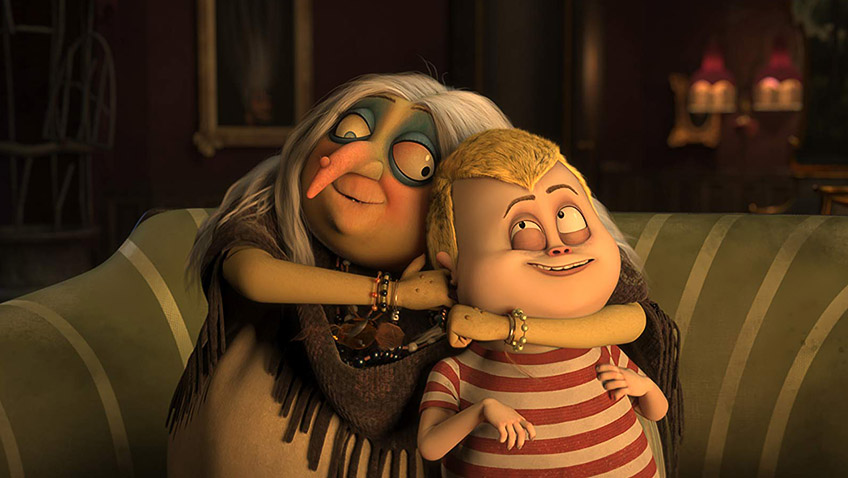 Bette Midler and Finn Wolfhard in The Addams Family

But Pugsley is not interested in the ‘old fashioned’ swordplay of the initiation, and prefers pyrotechnics, the first sign of a new generation breaking with the past. But it is quiet Wednesday (Chloë Grace Moretz, The Miseducation of Cameron Post) is the real rebel, and her friendship with Parker, (Elsie Fisher) a girl from the pastel coloured new town down the hill, prompts her to go to the local high school, instead of being home schooled.

For Wednesday the high school is less an opportunity to learn new things than to use her powers to scare people, but in Parker, the lonely, neglected daughter of TV show interior decorator and property developer Margaux Needler (Allison Janney, great) Wednesday finds her first friend. 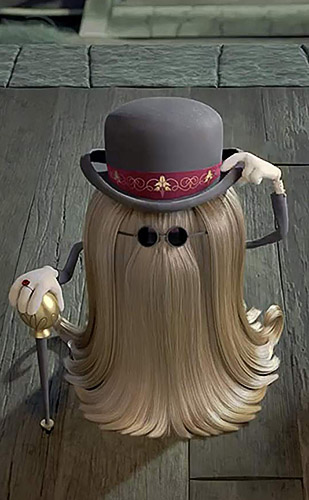 Snoop Dogg in The Addams Family

Both eighth graders are outsiders for different reasons. But when Parker is bullied and Wednesday has a great time punishing the bullies, they bond. And when they exchange clothes, with Wednesday going home in a pink dress and Parker, dressed in black like a Goth, complete with the hairdo, the writing is on the wall.

Well, actually, it is on the wall long before that. For Margaux has a controlling interest in her new housing development where, in her TV programme, she shows off her skills in design. The town is called Assimilation and the skinny, white, middle-class cheerleaders sing, ‘what’s so great about being yourself/when you can be like everyone else?’

And as if the parallels with Trump and his campaign are not obvious enough, Margaux has bleached golden blond hair, and the development is draining the marshes in the area (any similarity to a golf course is strictly coincidental). This might be affecting the old haunted house on the hill, but that house is old and different and is jeopardising the commercialisation of the area. Moreover, the arrival in the town of the Addams family for Pugsley’s 13th birthday will scare buyers away.

If that isn’t enough to convince you, unbeknown to the inhabitants, Margaux spies on the families from the basement of her house and publishes fake news on social media about the Addams family that leads to an angry mob attacking the house.

Meanwhile, there is nothing particularly scary or atmospherically creepy about the house or the family on the hill. The original family could not care less what outsiders think of them. Here that does not have to change because it is others who must change and be more welcoming to migrants – woops – that is, to those who look different, but are, underneath, a family just like yours.