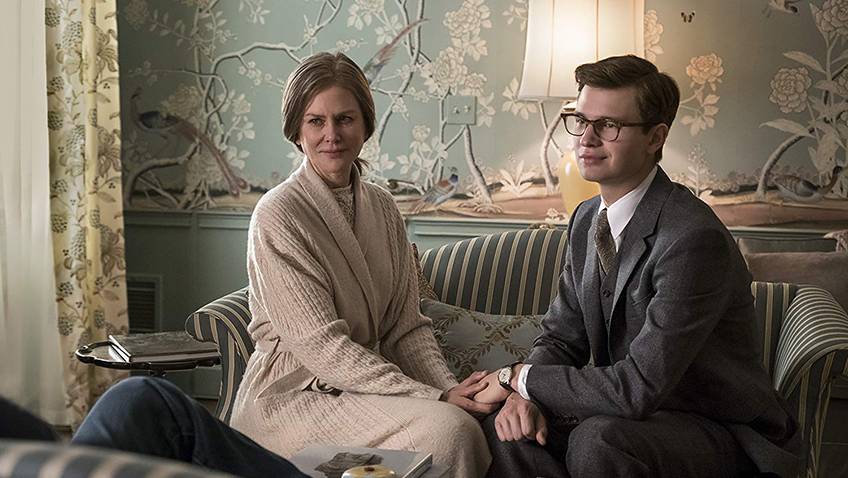 Poetry that engages with a work of visual art, like Auden’s famous Musée des Beaux Arts, is so prevalent there is a term for it: Ekphrastic poetry. There are films, too, that are, at least in part, inspired by paintings, such as Edward Hopper’s House by the Railroad

and Psycho; Caravaggio’s The Calling of St Matthew

, Martin Scorsese’s Mean Streets, and Francis Bacon’s Three Studies of Figures at the Base of a Crucifixion and Alien. But few films adopt as their title, the title of a painting, like Girl with a Pearl Earring, and now, The Goldfinch

. In this case, The Goldfinch

. This is why readers will want to see the film, and why many, even those who have not read it, are likely to be disappointed.

This is a complex book full of characters whose lives cross in a pattern of coincidences. It covers a sizeable time span during which a lot happens, particularly to the protagonist, Theodore Decker who – and this is often the kiss of death for film adaptations – narrates in the first person, in the voice of an adult looking back.

The biggest coincidence, but one which is downplayed in the film due to its structure, sets up the connection between bespectacled, brainy, 13-year-old Theodore Decker, (Oakes Fegley) and a painting in the Metropolitan Museum of Art that will haunt him, along with the death of his mother, throughout the story.

Theo survives a terrorist explosion in the museum when his art-loving mother and he seek shelter from the rain while awaiting an appointment with the principal of Theo’s school. Attracted to a red-headed girl his age, Pippa (Aimee Laurence), who is with an older man, Welton (Welty) Blackwell (Robert Joy), Theo remains behind when his mother goes into another gallery where she is killed in the explosion. Theo, half blind from dust and disorientated, finds Welty bleeding in the debris and stays with him. Welty gives him a ring and the name Hobart and Blackwell, while pointing to the small painting of a goldfinch tied to its perch by a chain, which is lying out of its frame, in the rubble. Confused, and ill, Theo takes the canvas and ring and makes his way through the chaos to the street and home, hoping to join his mother.

What we learn up front in the novel

, but only later in the film, is that, by an incredible coincidence, that painting, one of Theo’s mother’s favourites, is a rare survivor itself. It was painted in 1654 by a contemporary of Vermeer, Carel Fabritius, who died that year in an explosion in his Delft studio, destroying most of Fabritius’s work.

Taken in by Chance Barbour (Boyd Gaines) and his socialite, art-loving wife Samantha (Nicole Kidman), the wealthy parents of Theo’s nerdy school friend Andy, (Ryan Foust), Theo, who has hidden the painting in his old flat, is withdrawn and has no appetite. One day he looks up the name, Hobart & Blackwell and travels downtown to the address: an antique furniture shop where he is greeted by James “Hobie” Hobart, (Jeffrey Wright, excellent), to whom he presents the ring. Hobie, who is a master antique furniture restorer, runs the workshop. The affable Welty handled sales upstairs in a showroom that has been closed since Welty’s death. 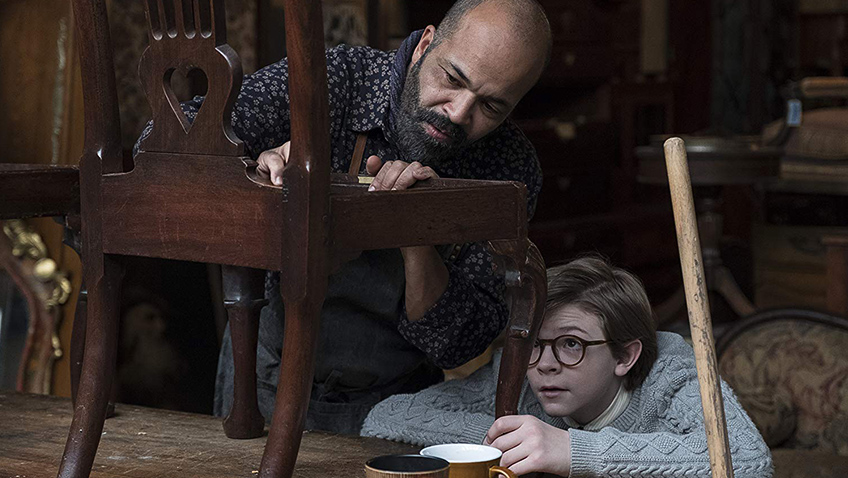 Jeffrey Wright and Oakes Fegley in The Goldfinch

This is a job that an older Theo will eventually occupy, after an apprenticeship with Hobie, becoming a more cunning businessman than Welty. But first, young Theo will be taken from the Barbour’s to Las Vegas by his estranged father, Larry (Luke Wilson), an alcoholic, failed actor turned professional gambler. Larry is now living in a large, rented house with pool, a bargain due to its isolated location, with his vulgar girlfriend Xandra (Sarah Paulson). Theo, who had always felt guilty about driving his parents apart learns that Larry had been seeing Xandra while still living in New York.

Larry and Xandra are negligent parents, and Theo is left to his own devices. He befriends classmate Boris (Finn Wolfhard), an androgynous, multi-lingual Ukrainian, who is already hooked on alcohol and introduces Theo to street drugs. Theo was first introduced to prescription drugs by Mrs Barbour and then Xandra to help him sleep, but Boris and Theo immunise themselves with drugs and become inseparable, until Theo runs away to New York for fear of being taken into care.

This is a sprawling, rich, picaresque saga in which a traumatised boy transfers his attachment to his mother to a painting that is wanted by the police and criminal gangs alike. It is as though he is chained to the painting like the bird to its perch. When 26-year-old Theo (now played by Ansel Elgort), is engaged to Kitsey Barbour, Andy’s kid sister, who blossomed, like Gigi, he asks himself, “Why did I hold it against Kitsey that she didn’t seem haunted over Andy and her dad; that she was getting on with life?” Theo has always loved Pippa, but she made her life in London to move on. Theo lives with old furniture and becomes partners with the partner of Welty, from the museum. Even Theo’s marriage to Kitsey is a way of pleasing Mrs. Barbour, now a widow, who told Theo that she considered him one of the family. 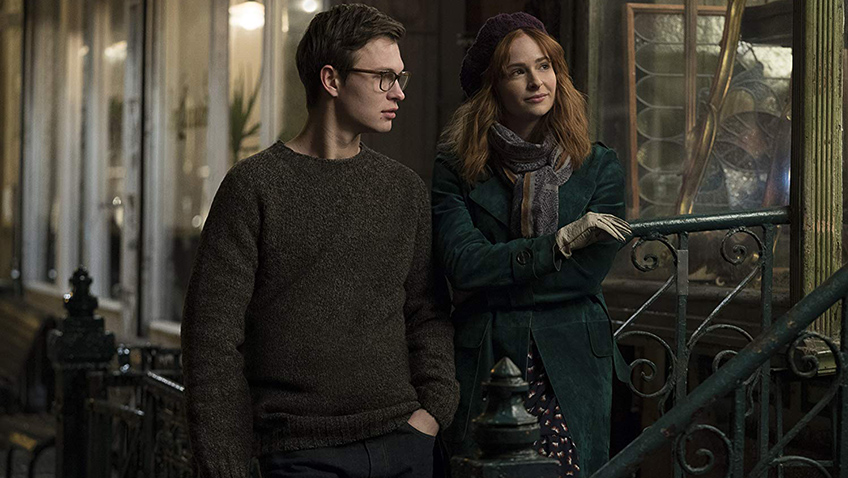 Ashleigh Cummings and Ansel Elgort in The Goldfinch

Despite the effective cinematography (Roger Deakins) and production design (K.K. Barrett) that admirably capture the contrasts between Theo’s home, the Barbour’s Park Avenue mausoleum, Hobi’s cluttered, cosy studio, and the soulless, deserted tract home in Las Vegas, the film feels superficial, like it is simply connecting plot points. Part of the static nature of the film might be due to the misguided choice to jumble the order of events with flashbacks so that we lose the important continuity (and jarring contrasts) of Theo’s coming of age and have to figure out where we are. For a film protagonist, Theo is unusually passive. He reacts, more than acts, his life being shaped by accidents, fate, chance encounters, loss and reunions.

is one of those books, like those by F. Scott Fitzgerald, that must be read. For if anyone could have adapted it, it is director John Crowley and writer Peter Straughan (Tinker Taylor Soldier Spy). Crowley’s film Brooklyn, adapted from Colm Tóibín’s epic novel, was a triumph, and did not leave you bemused and reaching for the book.

Of the cast, the actors playing the characters in their maturity are, across the board, less effective than their younger counterparts, in particular, the perfectly cast, charismatic Finn Wolfhard, who grows up to be Aneurin Barnard’s duller version of Boris. It is also a bit disconcerting that young Boris, so much taller than 15-year-old Theo, is that much shorter when they are reunited a decade later. Nicole Kidman captures the warmth, strength and sense of responsibility behind the steely socialite, Mrs Barbour, so that we feel her connection with Theo at the various stages of his life.