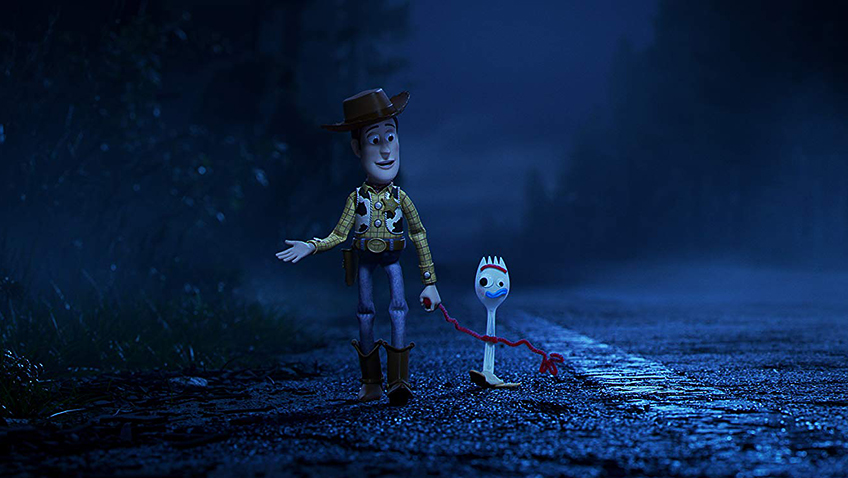 This just might be the best of the best

The Toy Story franchise is a class act, surely the most glorious animation franchise of all time, and, with advances in technology, it looks better than ever. Despite the title, the Pixar/Disney (now) label, anthropomorphic animals, talking cowboys and space rangers, Toy Story 4 is much more than kids’ stuff. It is not that the toys are old fashioned or that the stars – Tom Hanks (62), Annie Potts (66) and Tim Allen (66), most of the cast and the inimitable composer/singer, Randy Newman (75) are on the wrong side of 40; it is that the perceptively penetrating life lessons and the wisdom behind the drama registers with older viewers on another level. 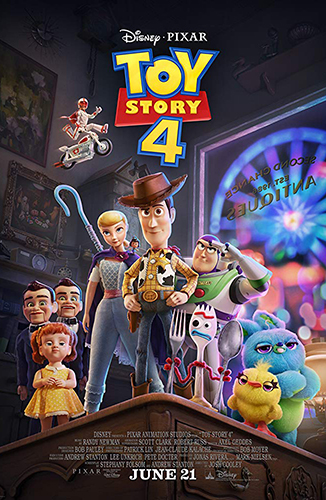 In a dazzling directorial debut, Josh Cooley (the storyboard artist on The Incredibles, Ratatouille and Up), and writers Andrew Stanton (co-writer of Toy Story 1, Toy Story 2 and Toy Story 3) and Stephany Folsom, efficiently and imperceptibly provide the back story we need. In a flashback Bo Peep (Potts) and her conjoined triplet sheep have been sold and are about to loaded into the buyer’s car. Sheriff Woody (Hanks) heroically tries to save Bo, but she tells him she is not Andy’s toy and it is another child’s turn.

The present day story takes place where Toy Story 3 left off, just after Woody’s beloved ‘kid’, Andy, has passed on his collection to his younger sister, Bonnie (Madeleine McGraw). Though his pride is wounded, Woody accepts he is neither leader of the toys, nor Bonnie’s favourite. It is touching, and even eerie, to see a toy we regard as human in dead-eyed ‘rag doll mode’ slumped on a shelf. Despite this rejection, Woody feels duty-bound to sneak into Bonnie’s backpack on kindergarten orientation day when she is distressed because no toys are allowed.

Witnessing how miserable Bonnie is when the other kids snub her, Woody salvages leftover playtime scraps from the rubbish and places them on her table. Unaware of Woody’s presence, Bonnie fashions her own toy out of a plastic folk and pipe cleaners, adding a face and feet. Although Bonnie’s confidence is bolstered by her teacher’s praise, she is not thrilled to learn that she has to return to school in a week.

To soften the blow, Bonnie’s mom (Lori Alan) and dad (Jay Hernandez) load the caravan for a trip to an amusement park. Though her favourite toys come along, Bonnie only has eyes for Forky (Tony Hale). Forky, however, like a homing pigeon, wants to find his way back to the rubbish bin from whence he came and Woody is relegated to retrieving him before Bonnie realises he has moved. Toys are not supposed to move of their accord! When Forky jumps out of the caravan, Woody goes after him. On the long trek to the camp site, he convinces Forky that Bonnie needs him the way Forky needs the trash. Every toy must have a sense of purpose. 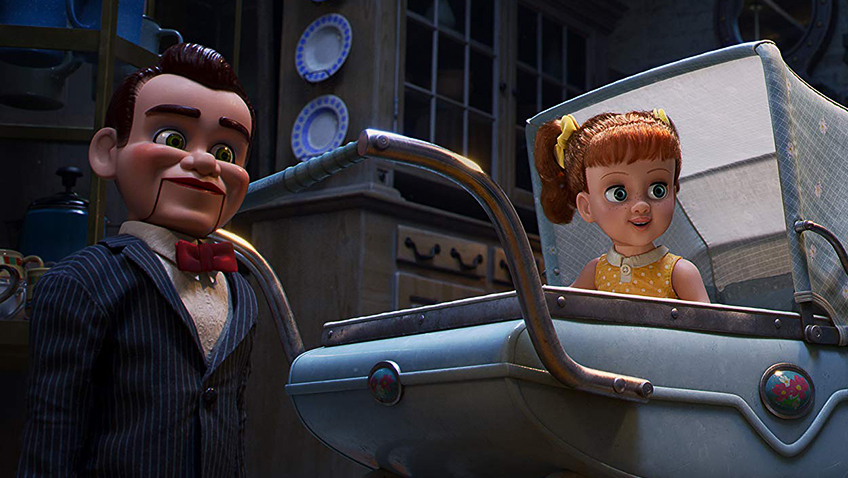 On his way to returning Forky to the caravan, Woody stops off at an antique shop, believing that Bo is there. Instead, he attracts the attention of wide-eyed Gaby Gaby (Christina Hendricks), a large doll who is driven around the shop in a pram by a group of menacing ventriloquist dolls who do her bidding. Gaby Gaby is convinced that no kid will love her without a voice box, and she sets her eyes on Woody’s. He’s had his turn at being loved, and now, she is determined that it is hers.

When Woody manages to escape from the shop, he his thrilled to be reunited with Bo. After years collecting dust in the antique shop, she is now living happily with her entourage, travelling around in a skunk mobile, surrounded by toys, hung as prizes in the amusement fairground stands. Her sense of purpose has been transformed.

But as Bo and Woody rekindle their relationship, Woody is torn between Bo and saving Forky, who has fallen under the spell of Gaby Gaby. She is using Forky as bait to lure Woody and his voice box into her lair. 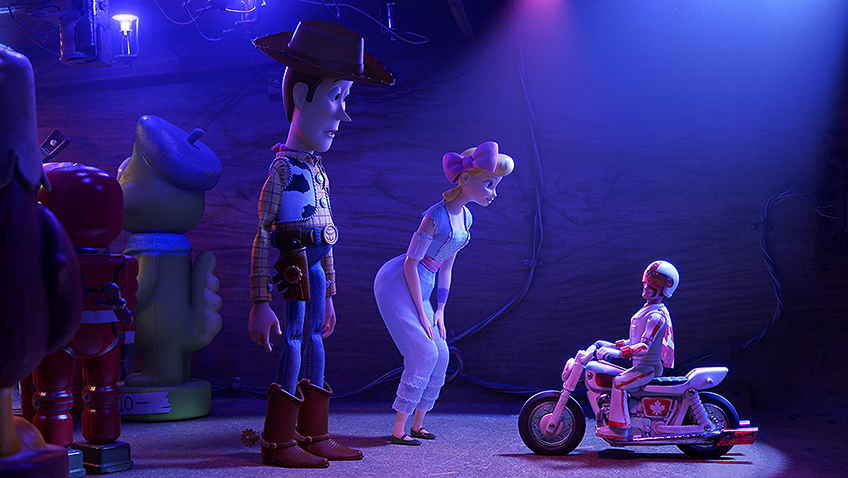 In addition to Gaby Gaby, there are three welcome additions to the toy group, including motorcycle stuntman Duke Caboon (Keanu Reeves in his voice debut). Once a cool dude, Duke’s self-doubt is a result of having been discarded by his kid when his jump distance failed to compare with what the kid was seeing on TV.

The humour in the film is supplied by passive-aggressive stuffed toy prizes Ducky (Keegan-Michael Key) and Bunny (Jordan Peele, the writer/director of Get Out and Us). Ironically Key and Peele co-wrote and co-starred in Keanu in 2016.

As the action, adventure, suspense and romance roll along, the creators (there are seven people, including the disgraced former Pixar Chairman, John Lasseter, credited with the ‘story) fill our minds, almost subliminally, with profound reflections on friendship, love, childhood, letting go, the imagination, empathy and what is a toy. 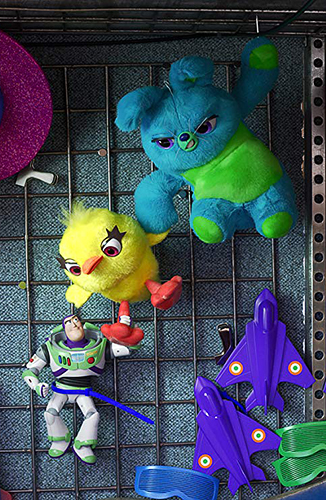 Woody, who has changed a great deal since 1995, here has the widest character arc of any character, as he begins to question his allegiances to a little girl who is no longer interested in him, as opposed to a glowing doll who is very interested. Carol Burnett (86), Mel Brooks (92), Carl Reiner (97) and Betty White (97) voice toys that Bonnie has outgrown as a warning to Woody that his time will come.

It might be Woody’s film, but, in keeping with Disney’s feminist agenda, there is a strong female presence. Woody’s fate is bound up with Gaby Gaby’s, while Bo has become liberated in more ways the one. Now (somehow) wearing loose trousers, she is an action heroine who slings some tape around her broken porcelain arm and gets on with the job of saving Woody from himself. And who can ignore the #MeToo movement when Woody literally passes the sheriff’s badge to his former underling Jesse (Joan Cusack, 56).

Bonnie, though very young, makes us think about the nature of creativity and perhaps even the future of manufactured toys. Unlike Adam, she is less interested in toys that others have made than in making her own. She brings them to life with her own imagination, and decides for herself what a toy really is. This is a film made with an abundance of imagination about the power of everyone’s imagination.

Almost all of the toys are vulnerable: obsessed with both abandonment, and finding a kid to comfort and amuse, which is their purpose in life. Gaby Gaby is so desperate for a child’s love that she ready to kidnap and deceive. But whereas adults might see her as the villain, Woody changes our perspective as his empathy reveals her capacity for love. If Forky longs to be abandoned and return to the trash it is because he cannot image how he can be a toy. In this regard, Toy Story 4 might just have the greatest last line since Casablanca and Gentlemen Prefer Blonds.