Home / LIFESTYLE / REVIEWS > / FILM REVIEWS / Off kilter to a fault, Sometimes Always Never is a celebration of older talent 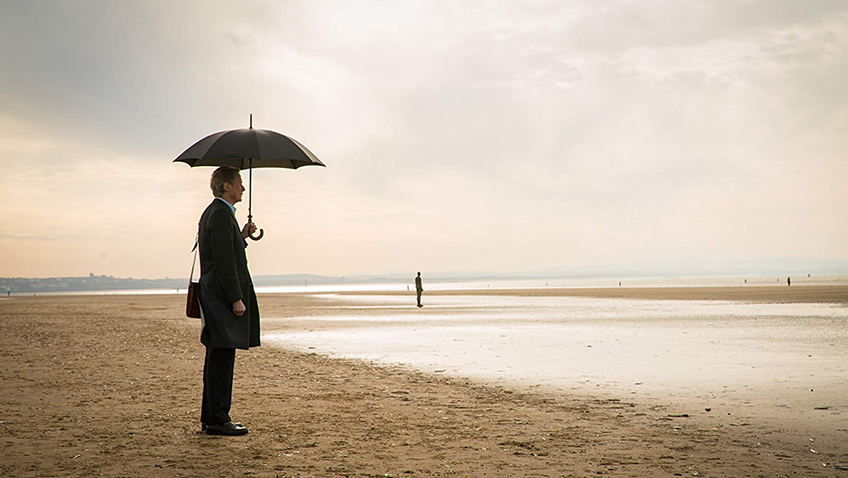 Off kilter to a fault, Sometimes Always Never is a celebration of older talent

In terms of showcasing mature British talent, Sometimes Always Never is something to celebrate. Carl Hunter, the bassist of the Liverpool-based band, the Farm has makes his feature film debut at age 54, based on a screenplay by 59-year-old novelist and screenplay writer Frank Cottrell Boyce (Millions, 24 Hour Party People, Welcome to Sarajevo) and starring its executive producer, Bill Nighy, 69. Liverpudlians Hunter and Cottrell Boyce lets us know where we are from the first shot of Alan (Nighy), standing with an open umbrella on a deserted wintery beach in Crosby, like one of Anthony Gomley’s dark statues. He stares out to sea as though he wants the umbrella to carry him away, à la Mary Poppins. This melancholy story of a father-son reconciliation has a lot going for it, but Sometimes Always Never is undermined by a distracting style that is at odds with the content and by story lines that fail to coalesce in a meaningful way. 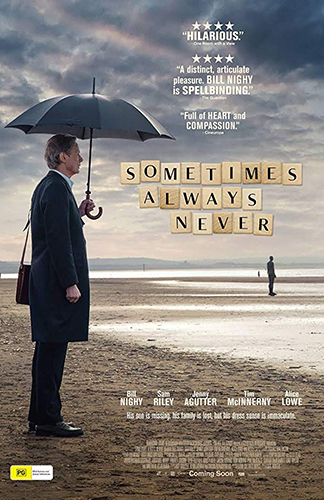 The tone of the film is quickly established in a quirky, self-conscious style that is the visual equivalent of Cottrell Boyce whimsical writing, and Nighy’s eccentric deadpan anti-hero. We see glimpses of characters through oval openings and mirrors, obviously painted backdrops and contrasting black and white inserts, 60’s and 70’s wallpaper with captions written on them and animated sequences and back projections that look like botched blue screen sequences. In the more normal shots, buildings and rooms are not shown in their entirety as though to block the viewer from getting a clear picture.

We get a dose of this visual humour early on as Alan, being intentionally evasive, arranges to meet his estranged son Peter (an excellent Sam Riley) at the ice-cream van on the boardwalk that resembles a child’s pop-up book. The exact purpose of their reunion is not immediately clear and when they drive to their destination their conversation is at cross purposes.

Their conversation is less dialogue than repartee, punctuated with letters, words and on captioned on-screen vocabulary (Itinerary: A planned route or journey), for Alan is obsessed with scrabble, and his mind thinks in words and letters. In the hotel, when Alan asks for the music to be lowered, he says, ‘the only time I like jazz is in scrabble.’ But it was when Alan was playing scrabble with his favourite son, Michael, that Alan’s life changed forever, as Michael got up to leave and never returned. For years Alan has been searching for Michael and posting black and white missing person posters of a child that could be anyone.

As their grim mission is discovered, so is Alan’s passion. In what is arguably the best sequence in the film, at the morgue they meet 60-something couple Margaret (Jenny Agutter) and Arthur (Tim McInnerny) who, Margaret tells Alan, used to be a session singer for famous stars. Alan offers the scrabble-playing couple a game to pass the time, while leading them to believe he is an amateur to Arthur’s self-confident, skilled player as in the film, When Margaret is out of earshot, Alan proposes they play for £200 – perhaps, Peter latter suggests, thinking the couple are wealthy musicians. This set-up, is of course, reminiscent of All About Eve.

When Arthur goes to the gents, Alan and Margaret bond as Margaret tells Alan her story, but Alan does not reveal that his son, too, is missing. When Arthur returns, Cottrell Boyce, who is adapting his own short story

, has a blast with the discussion of what is a word and what isn’t while Margaret expresses her frustration with Arthur by laying down a low-scoring word that blocks him from gaining a higher score.

But lined up in the waiting room with Peter, disgusted that his father had fleeced a grieving father out of £200, it becomes apparent that they are all there for the same reason. Alan seem glib about the prospect of both couples being present to identify the same corpse and when the corpse is not Michael, Alan returns to the waiting room with the good news, insensitive to what it means for Arthur and Margaret.

Of course, Alan is masking his grief under a defensive façade. So it is odd that when he accepts a reluctant invitation to stay at Peter and Sue’s (Alice Lowe) house, we are as bemused as Peter to find a sexually satisfied Margaret in compromising attire, leaving Peter’s room, prompting Peter’s ‘joke’, ‘even I am not having sex in my bed.’

There are several plots lines here, each of which could be expanded into a film. We never see Margaret again, leaving you to wonder about her motive and Alan’s. There is Alan’s strained and competitive relationship with Peter, and his relationship with Peter’s son, Jack (Louis Healy) which could also be a film in its own right. When Alan takes over Jack’s bedroom and computer, some humour is derived from Jack showing up for breakfast for the first time in months. Alan helps Jack with his girl-shyness and makes him a suit – explaining how to button it, with the sometimes (top button), always (centre button) never (bottom button) rule of thumb.

The reason Alan is glued to Jack’s computer is that he is playing on-line scrabble while searching for clues as to Michael’s whereabouts in the words his anonymous opponents use. At one point he is certain that he is actually playing Michael on-line. At one point this double-game seems to be leading the film in a new direction as a kind of grief-stricken man’ mystery, but Michael’s key words are part of Alan’s love of words, which could be the theme of another film. In fact, you could rewrite this film without the motif of scrabble and not change the plot, characters or emotions.

Two writer/directors come to mind who have the ability to combine quirky visual effects, whimsicality and dead-pan with strong, deep emotions, although even these masters can cross the line. Wes Anderson (Isle of Dogs, Moonrise Kingdom) and Aki Olavi Kaurismäki (The Other Side of Hope, Le Havre), show that it is harder to carry this off than it looks. In Sometimes Always Never the filmmakers score a few own-goals, as the emotion inherent in the film is counter-acted by the distracting style and script.