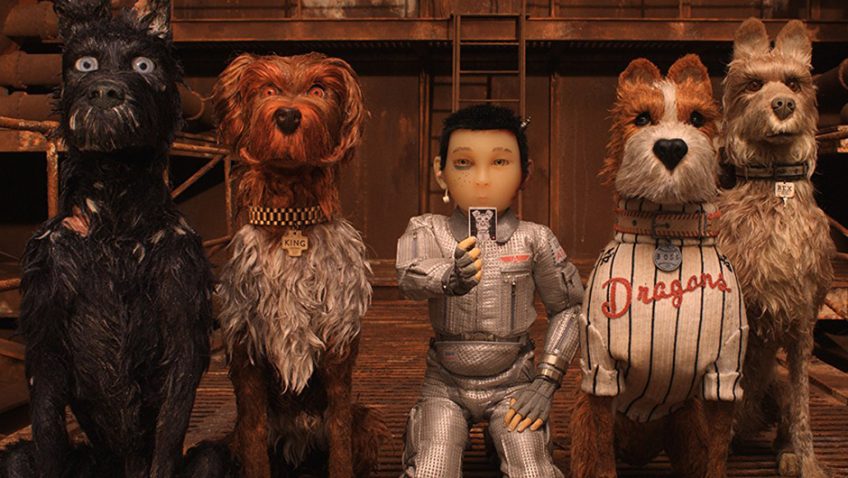 Wes Anderson films (The Royal Tenenbaums, Moonrise Kingdom and The Grand Budapest Hotel) are still events. Dog lovers as well as fans of animation and Anderson’s unique style will delight in Isle of Dogs

his second (after Fantastic Mr. Fox) film made in the laborious method of stop frame animation. Isle of Dogs

has all the inventiveness, visual and stylistic flair, cinematic references and whimsicality of the best of Anderson’s films, while being arguably more ambitious than any of them. But the film’s boy and his dog story set in an alternative reality Japan ten-years in the future, lags behind the visual spectacle.

In the city of Megasaki (that sounds disturbingly like Nagasaki), in a futuristic Japan, canine flu and snout fever, not to mention a newfound preference for cats, has resulted in Mayor Kobayashi (Kunichi Nomura) issuing a popular edict that banishes all dogs to Trash Island. Londoners might envisage the former swampland in East London opposite Greenwich called The Isle of Dogs, but Anderson’s is quite literal.

Even the Mayor’s 12-year-old ward and nephew, Atari (Koyu Rankin) discovers that his adored pet and guard dog, Spots (Liev Schreiber) is no exception. In fact, Spots is the first, dropped from a chopper onto a rat-infested wasteland, where the only buildings remaining are the remnants of factories destroyed by earthquakes and tsunamis. His cage is locked and we assume – as does Spots – that within days he will join the carcasses scattered throughout the island.

Cut to life on the island some time later when we gradually meet the alpha dogs (this is a male bonding movie) who are the main characters in the adventure. Still proudly wearing their collars, they are a mangy, scruffy, undernourished lot. Water is often contaminated sewerage and food is maggot-infested scraps that sometimes the dogs don’t even both to fight over.

It’s when adhering to the plot that things start to go downhill as you quickly realise its limitations. Atari – labelled The Little Pilot in a reference to Saint-Exupéry, the pilot and author of The Little Prince

– lands on the island in search of Spots. This is the first sign that there is a rebellious faction in Megasaki.

While the other dogs are protective of Atari and vow to help him find Spots, it is, through a quirk of fate, Chief who becomes Atari’s guide and uneasy companion for most of the search. What makes it uneasy is that Chief is a proud stray who might be a bit defensive, but shuns the master-servant model.

Anderson’s co-writers, Roman Coppola (who made such an impressive contribution to Moonrise Kingdom), actor/writers Jason Schwartzman and Kunichi Nomura are often clever, but equally self-indulgent. The journey, which is episodic and seems to make up the rules as it goes along, denies us any real suspense. What holds your attention is the astonishing detail in the meticulously designed and animated puppets and the intricacy of the lighting and set design. In terms of sheer craftsmanship and artistry, seldom has animation been so captivating.

The introduction of Tracy (Greta Gerwig), a tall, skinny American exchange student with a mop of curly blond hair is a serious misjudgement, especially when Tracy leads the opposition like an American imperialistic power after WWII. And why is she speaking English to her school colleagues and in her rallying speech to the Japanese public? Surely she has command of the language when she is an exchange student and editor of the Megasaki Senior High Daily Manifesto?

Anderson has ground rules: the Japanese-speaking characters speak in Japanese unless speaking through a human translator or device, while the dogs would ‘bark’ their dialogue in English. Language rules do not seem to apply to Tracy.

Japanese cinema lovers will appreciate the influences of Kurosawa’s lesser known films; what he refers to as the city-based movies: Drunken Angel; the 1949 film noir Stray Dog and The Bad Sleep Well (1960) which is loosely based on Hamlet. These star the great Toshiro Mifune, but why is the evil Mayor Kobayashi made to look like Mifune? The Mayor’s too-convenient sudden change of heart regarding the dog issue aside, the Mayor is the bad guy with none of Mifune’s characters’ charisma. The French composer Alexandre Desplat (an Anderson regular) has created another fantastic score, tinged with Japanese sounds, but, the score is not an imitation.

While obsessed with all things Japanese, there are more obvious echoes of other, non-Japanese films including White God about a 13-year-old who fights to protect her dog in a dog-hating city.

If the Isle of Dogs

is celebration of Japan and a parable, it might also be a satire (although work on the film began before the election) on Trump’s America and Putin’s Russia. In the Mayor we have the autocrat who creates fake news (witness the quashing of the scientific findings on the eradication of the virus); a form of racism (Tracy reveals that the Mayor comes from a long line of cat lovers); an unchallenged election and the poisoning of Professor Watanabe (Akira Ito), who, by speaking out against the dogs’ banishment to Trash Island, is branded a traitor.

Still it is hard to discount the goodwill that comes from a filmmaker striving to push the barriers of his art, creating fun for all ages, and celebrating a moral outlook that now, we need more than ever.