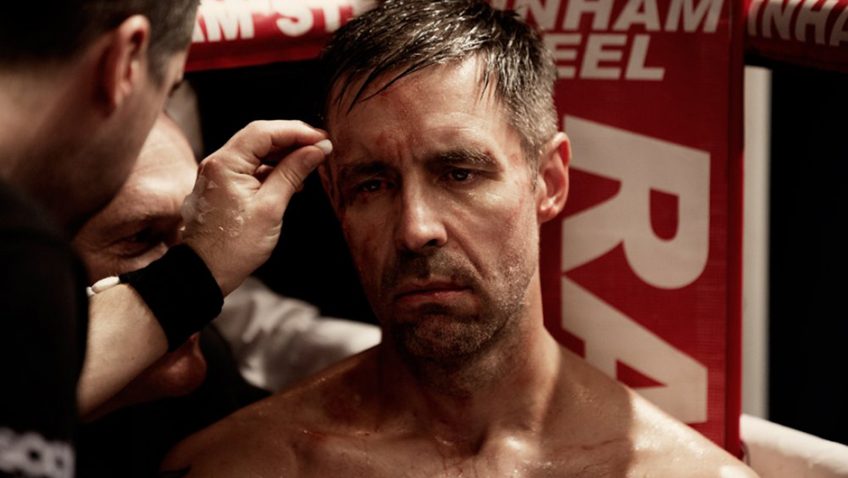 It was twenty years ago that Burton Upon Trent-born actor Paddy Considine treated the world to a remarkable, chilling performance as the disturbed Morell in Shane Meadows’ A Room for Romeo Brass. And it was just last year that he wowed a sold-out West End theatre crowd with his lead performance in Ferryman, set in the 1980s during the Irish Troubles. Considine’s impressive debut as a writer/director, Tyrannosaur in 2011 revealed two other facets to this talented man. The acting on show in Journeyman

Like many of Considine films (he was terrific in the downbeat The Last Resort and Dead Man’s Shoes) Tryrannosaur, which begins with an unemployed widower kicking his dog to death, focuses on a troubled character. In Journeyman

Considine puts himself through the ringer.

begins with happiness so that Considine fans, and boxing movie fans, are held in suspense awaiting the troubled part. Matty Burton returns from a run to his expensive modernist house (in Sheffield) where his family await him. A happily married new father he plays with his adorable daughter Mia and then, turning her highchair away, makes love to his attractive, adoring wife and rock, Emma (Jodie Whittaker). Considine sets up the story so that we see all there is to lose, and Emma is worried, even if she tries not to show it.

Burton is in his early forties and instead of retiring he is defending his middleweight boxing champion title against a much younger man, Andre Bryte (Anthony Welsh). Emma does not attend the match, but she attends a press conference in which she frowns with anticipation as Bryte threatens to do damage to his opponent, and warns that the fight will be a life changer for Burton.

Bryte is not a villain as it happens. He later earns redemption by apologising to Burton and admitting he was ‘naïve’ in saying those things just to increase ticket sales. In this film, there are no villains, just fate and the risk of a deadly sport.

Contrary to our expectations, Burton wins the match on points, but Bryte does inflict a life changing blow on Burton – one that manifests itself after he returns home to the relieved Emma, brandishing the trophy belt. Burton suffers a terrible headache, collapses, and is brought back from hospital some time later a near vegetable, with severe memory loss and erratic fits of violence. 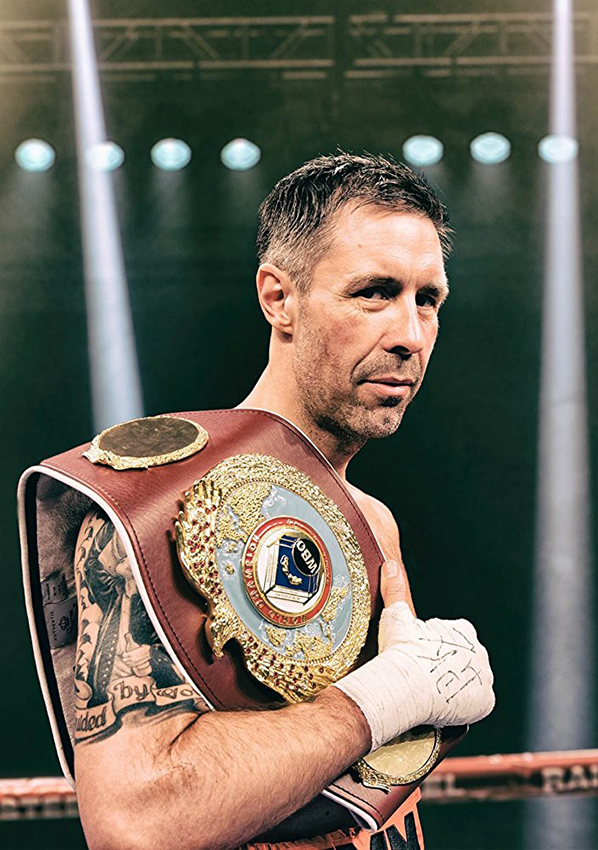 This isn’t exactly where the film goes downhill, because it never is very convincing. Considine trained five days a week with a professional trainer in Sheffield and followed a sports nutritionist’s diet, but he never looks like a fighter capable of going the distance with the muscular Bryte.

But credibility is really challenged when Emma fails to hire either a full or part-time carer for her husband, a child minder for Mia or even a cleaning person. Sure, they have to watch their money now that Burton is an invalid, but there is surely insurance money and savings as he hints to a television interviewer that he might retire after the fight.

The inexplicable absence of a carer, cleaner or child minder sets the stage for Burton to find a novel way to stop Mia from crying while Emma is vacuuming upstairs. Already frightened for her life (Burton has slapped her) Emma has had it and leaves Burton to his manager and boxing friends, who have been curiously absent since his hospitalisation.

has to compete with some superb boxing movies, some of which are based on fascinating true stories, like last year’s Bleed for This. It does this by focusing less on the fighting and physical injury than on the mental injury, an area that has not been as widely covered and could use more exposure. Though his performance might be weakened by the challenge of directing himself, a scene where Burton struggles to make tea or his phone conversation with Emma, as he stares out the window looking for her, will pull at your heart strings.

The repercussions of repeated blows in football were covered in the disappointing, but informative biopic Concussion, but Journeyman

does not do the same for boxing injuries. We see Burton benefitting from physical therapy, but where are the MRI scans and Emma’s discussions with a psychiatrist or neurosurgeon about the mental scars that have forced her to abandon the love of her life?

Nor do we see Burton or Emma (she does not seem to have any friends of her own) doing research on, let alone publicising mental injuries and the often long-term effects of being knocked about. Maybe that’s the point of the film; that Burton is accustomed to taking life’s blows without apportioning blame or asking questions.

Burton does give a courageous talk at a dinner in his honour, where he confirms his love of boxing and exonerates Bryte, his new friend. We never learn whether the dinner was organised to raise money for brain injured boxers, or just as a social affair to honour Burton, but suspect it is the latter. He’s not a showman like Bryte.

But the final scene hints at something darker that is underdeveloped. We watch a convalescent Burton getting back to, what is for him, some semblance of a normal life. He is in the gym, training young boys to dodge the blows that might one day ruin or end their lives.