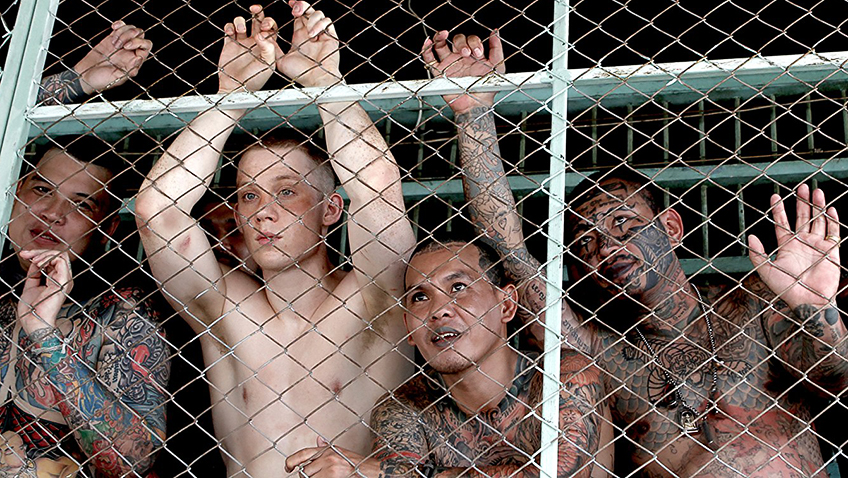 We’ve all read horrific news stories about innocents abroad who have been thrown into prisons from hell in a foreign country, but does it make it any better if the person in question is guilty as charged? In the case of Jean-Stéphane Sauvaire’s (Johnny Mad Dog) visceral, riveting adaptation of Billy Moore’s 2014 memoir

about his three years in Thailand’s notorious Bang Kwang Central Prison, the answer is, probably not. Script writers Jonathan Hirschbein’s and Nick Saltrese’s main task has been to eliminate Moore’s back-story (a long prison record and heroin addiction) and anything that might detract from the physicality of Sauvaire’s immersive vision of the prison experience. A Prayer Before Dawn

is punishing to sit through, but Sauvaire’s artistry makes it equally impossible not to stay the course.

The only back story afforded us is enough for Sauvaire’s purposes. We do not know why Billy (Joe Cole) is in Thailand, whether or not he has a girlfriend or any friends and how he has become addicted to heroin. After an opening scene in which this reasonably good looking, baby-faced, big-boned, pale 20-something is beaten up pretty badly in an under-the-radar fight, heroin looks like the only thing that keeps him going. If he had a trainer, his trainer would tell him that you have to be healthy to fight. But survival and where his next fix will come from put health way down on the list of Moore’s priorities.

When he is caught, the fact that he is resigned to his fate and faces up to his punishment in silence, gives us enough respect for Billy to root for him inside. Sauvaire is not rubbing our nose in the filth and overcrowded conditions, the fear, the discomfort, the hunger, the humiliation, the continual body searches, the boredom, the threats, and the incomprehension (his Thai is limited): you have no doubt that it is not exaggerated.

The sanitary conditions are as disgusting as the food and when Billy becomes belligerent, he is locked in a tiny cage the size of a dog kennel. Solitary confinement might nonetheless be preferable to company. One night Billy gets up to urinate in a hole in the corner of the depressing, concrete cell room that he shares with some 40 other men. As soon as he does he is grabbed from behind at knifepoint and made to watch the only other outsider in the room be gang raped by some five men. The next morning the man is found hanging from a rope, but the officials do not bother launching an investigation. No one will talk.

While it might be bad enough sharing a cell with people whose language you do not speak, Billy is the only white person. His whiteness stands out all the more against the black tattoos – that seem to attest to their gang, or tribal connection – that cover the dark bodies head to foot. When his stubble is shaven and his hair cut off, he looks like a teenager. But Billy is taller than the native prisoners and they know he’s a fighter. 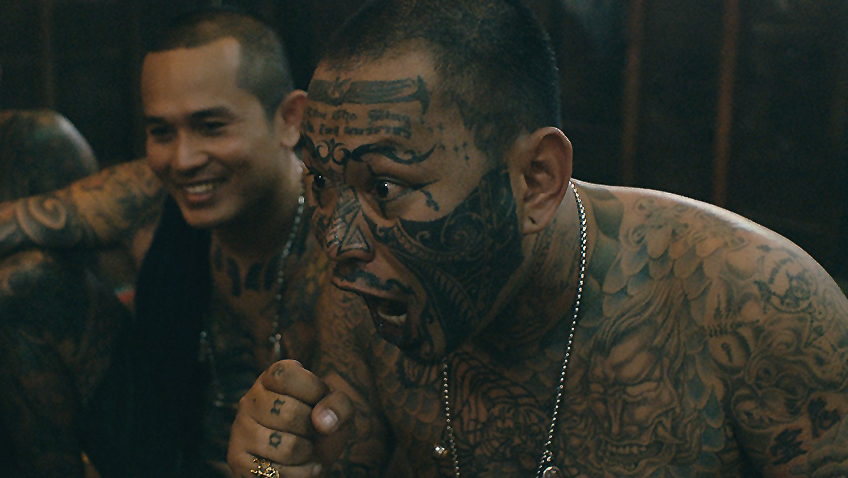 Panya Yimmumphai in A Prayer Before Dawn

The inmates do not have empty lockers and lice infested beds: they have no beds and no lockers. They sleep on the hard floor on their backs with their heads propped up against the wall. The only false note in the film is that there is no snoring. You imagine the snoring would make it all the more difficult to fall asleep.

Sauvaire does not bother translating the gang members’ non-stop babble, so that we imagine that they are talking about Billy and that something said will catch him off guard. The tension comes from this uncertainty.

Billy adapts quickly and learns that cigarettes, a valuable commodity, make life more bearable. He strikes up a relationship with androgynous inmate Fame (Pornchanok Mabklang) who provides sexual relief and cigarettes for an IOU. It is from his conversations with Fame that we learn he has brothers in the USA, and a father. These scenes reveal a side to Billy we have never seen before; behaviour akin to an awkward vulnerability and a softening into something resembling tenderness and affection.

But to survive, Billy has learned never to display this side. One racist guard offers Billy a reward for beating up some Muslims that are causing him grief. Billy, desperate for heroin, tells the guard that he will do anything if he can get a fix. The guard reluctantly complies and Billy more than fulfils his side of the bargain. His violence may seem out of control, but Billy is in the ring, on autopilot. The intensity of his killer punches shocks even the guard, who is left speechless.

What saves Billy in prison is ultimately what destroys him and forces him to change his life. Billy realises that his only chance to stay sane, and his only way out of the horrific cell is through boxing. Cigarettes help him land a place in the boxing club and the trainer turns out to be a good one. Billy finds himself with the ‘elite’ and their mutual admiration creates a bond that is not based on fear. Billy learns that he will be fighting against a rival prison and his prison’s honour, if that’s the right word, is at stake. He impresses the officials but the kicks to his ribs and stomach combined with the drugs are taking a toll. He starts splitting blood and the prison doctor wants him to withdraw from the big fight.

This might be a prison drama, but the fight scenes are right up there with the best boxing movies in history. Fight choreographer David Ismalone and cinematographer David Ungaro assure us something better – or more terrifying – than ringside seats at the fight. They place us in the ring, just where Sauvaire wants us.

Joe Cole, who is probably in every shot, is utterly convincing. He looks nothing like the real Billy Moore (who plays his father visiting him in prison), but for the duration of the film, he is Billy Moore. Cole, who plays Luke in TV’s Skins and John Shelby in BBC’s Peaky Blinders, might be type cast, but A Prayer Before Dawn

will be his breakthrough feature film role, just as prison drama Starred Up was British actor Jack O’Connell’s.