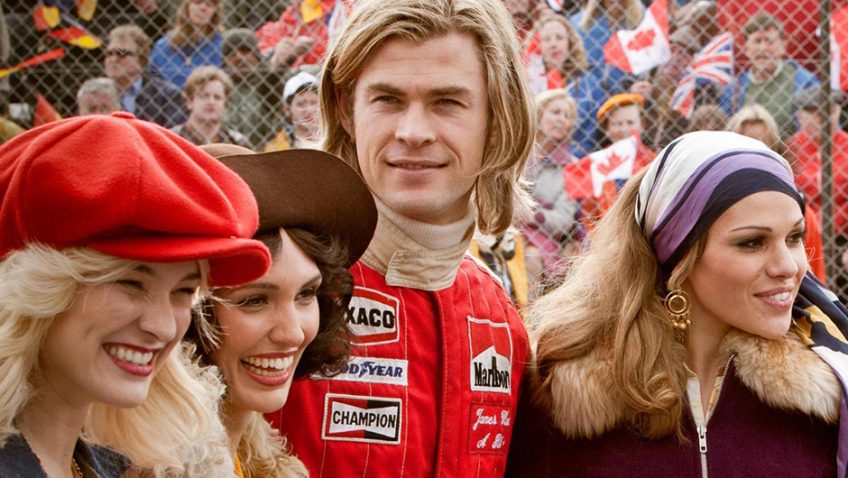 Remarkably accurate. The acting and casting is superb

As far as sports go, Formula One is at the bottom of my list. It’s not physical exercise, but a bunch of tax exiles burning rare and costly fossil fuel and rubber at an alarming rate without going anywhere. As for role models, we can look to the high rate of road accidents and deaths in the 17-30 age bracket to see what a great influence the sport is. But as far as films go, Formula One is at the heart of two of the best sports films of the 21st century: the Oscar winning documentary Senna, and Ron Howard’s entertaining new feature, Rush

All American child actor-turned-Director of popular culture Ron Howard, now 59, is associated with Hollywood films like Parenthood, A Beautiful Mind, Apollo 13 and The Da Vinci Code. With Rush

, which is independently financed, he re-teams with his Frost/Nixon writer, Peter Morgan, and turns to Europe for a double biopic of three-time World Champion, Niki Lauda (Daniel Brühl) and 1976 World Champion, James Hunt (Chris Hemsworth).

At the heart of the film is the rivalry between the two drivers that fueled the two competitors on. The charismatic, handsome, dare-devil British Hunt and the cautionous, reserved, buck-toothed Austrian Lauda, were polar opposites. Hunt left the mechanics and business side of things to others, while Lauda, disowned by his wealthy family when he insisted on driving, secured a loan backed by a life insurance policy to buy his way into Formula 2.

Impressing his bosses with his knowledge of car mechanics as well as driving, Lauda rose through the ranks the hard way. Lauda approached all of his obstacles (only hinted at in the film) with a calculated plan and ‘can do’ attitude, but, unlike Hunt, he drew the line at unnecessary risk, accepting 20% but no more.

At the Nürburgring Circuit in 1976 Lauda, who was ahead of Hunt by a healthy margin, decides the risk is above that level. This was before the safety features that followed Senna’s death in 1994 took a lot of the objectionable risk (and some say, the interest) out of the sport. When Hunt, eager to catch up with Lauda ridicules him in front of the other drivers, Lauda reminds him that he has the fasted time on that circuit. Unlike the aloof Lauda, Hunt has a nonjudgmental charm and penchant for partying that makes him popular with the rest of the drivers. He carries the vote, the race goes ahead.

We quickly understand that it is the adrenalin rush and the competitive drive that motivate Formula One champions, both of which Hunt and Lauda had in spades. Two months after the near fatal crash at Nürburgring, Lauda is back on the track, his recovery aided by watching Hunt narrow his lead on his hospital room television.

Although the driving sequences are brilliantly re-enacted, most of the film takes place outside of the cars. Two delightful scenes show how Hunt and Lauda meet their first wives. Hunt is so seduced by Suzy Miller’s (Olivia Wilde) flirtatious air of indifference and glamour that he impulsively proposes at their second meeting. Within a year of their October 1974 wedding, their different life styles, his drinking, selfishness and womanising result in a divorce. Suzy finds what she is looking for in another wealthy celebrity, Richard Burton, whom she married in 1976. 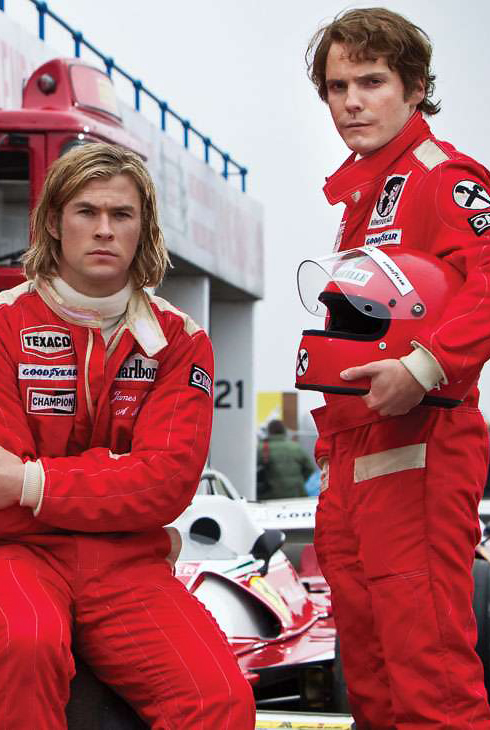 The circumstances in which Lauda meets German socialite Marlene Knaus (Alexandra Maria Lara) are even more fun and romantic. Dragged to a party that he decides not to enter, Lauda is stranded outside when Marlene, leaving early, offers him a ride to the station. Lauda without a car shows the man as an vulnerable individual next to an attractive woman. Marlene has no idea who the man is until they pick up two hitchhikers who recognise him.

The acting and casting is superb, with Hemsworth, who looks remarkably like Hunt, shedding the muscle-man image from Thor and The Avengers, to become a thoroughly credible and compelling Hunt, whose life spent pushing the limits gave him his career, but ended his life at age 45. Brühl (Inglourious Basterds, The Edukators, Goodbye Lenin) transforms himself into the spitting image of the real Lauda, an admirably methodical, ambitious and interesting though flawed character. The actors make us understand how both internalised the stress of their vocation and single-minded determination to win to the detriment of their private lives.

Ironically, though, while the film is remarkably accurate in most respects, the central theme of the mutual animosity and intense rivalry between two strangers, only turning to something akin to friendship at the end of their careers, is fiction. According to Lauda, they liked each other a lot and went out on the town in London on a regular basis early on in their careers.