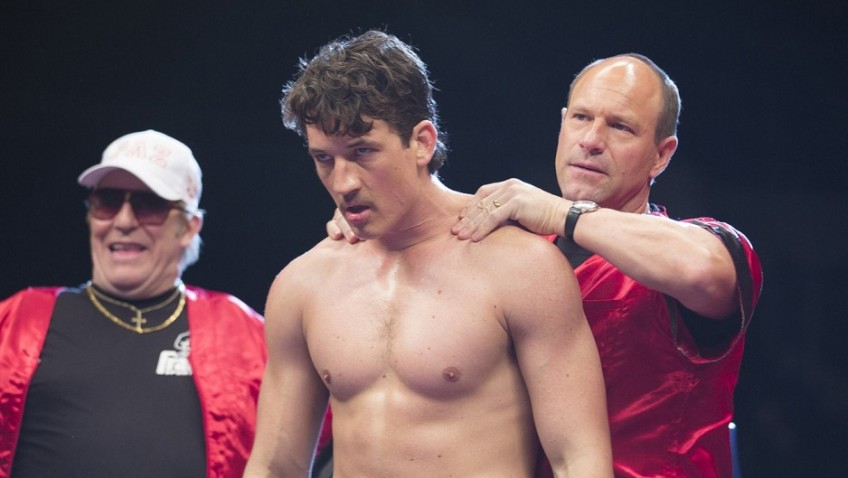 A great comeback story, but the blood is cold

The posters are not far wrong. Bleed for This

has to be the best true life comeback story in the annals of boxing. Former lightweight and light-middleweight champion Vinny Paz, AKA The Pazmanian Devil, actually had two come backs, and in the second the odds were all against him. The film might even be a comeback for 44-year-old Ben Younger, a talented director who hasn’t made a feature since his off-kilter second movie, Prime, in 2005.

If the title is a disadvantage, Younger has the advantage of a cast that includes Miles Teller, hot from his breakthrough performance in Whiplash, and – although you might not recognise him – Aaron Eckhart – as Vinny Paz’s alcoholic manager. The real uphill battle here is with ‘comeback’ fatigue and not just in boxing, but across a plethora of movies about an individual or team winning against the odds.

Party animal Vinny Paz (Teller) might not drink, but he has a sexy girl on his arm as he samples the gambling tables wherever he is. When we first see Paz, he is the IBF World Lightweight Champion about to fight against Roger Mayweather.

At press conferences he’s a clown and in the ring he’s cocky, but he lives to fight. If he loses to Junior Welterweight Champion Mayweather in 1988, it’s down to his smothering father, Angelo (Ciarán Hinds) and dodgy fight promoter/manager Lou Duva (Ted Levine) who fail to appreciate Paz’s struggle to keep his weight down. When Paz collapses under Mayweather’s glove, it’s from dehydration.

After this (and, not shown in the film, another loss) Paz is at a new low. But his luck changes when he hires Kevin Rooney (Eckhart), who is also in the doldrums. Rooney was the trainer behind Mike Tyson’s 35 straight win success story, but their collaboration came to an abrupt end when big money got involved. Rooney sees that Paz is not fighting at his natural weight. When Paz goes up two weight levels he defies the bookies with a superb victory over WBA World Jr Middleweight Champion Gilbert Dele in Providence, Rhode Island, near Paz’s home. Paz is celebrating becoming only the second fighter in history to win both the lightweight and junior middleweight world championships when his luck changes again. Miles Teller in Bleed for This

Younger (who also wrote the script) shoots the accident scene so that we know something terrible is going to happen, but when it does, it is still shocking. Paz’s neck is broken and the prognosis is that he might never walk again. He will certainly never fight again. But Paz is having none of it. He opts for the quickest, but most dangerous and painful road to recovery, by which a metal ring calls a ‘halo’ is literally screwed to his skull. The rest of the apparatus is attached to a plastic jacket that acts as a second skin. The halo looks like a medieval torture instrument, but it stops the spinal column from moving for a critical 3-month period.

Younger takes us with Paz on his slow, agonising road to recovery. But Paz hates being the passive victim on display in a hospital bed in the family living room. As soon as he can walk, he sneaks down to the basement to begin training. Rooney is horrified as any knock to the halo or strain could result in paralysis, but, afraid of losing another client, he assists, trying to protect Paz as much as possible. The question remains, if Paz manages to recover, will anyone dare to fight with him again?

Boxing aficionados, and anyone who has ever seen a sports underdog movie before, will know that there has to be a pay-off for enduring Paz’s 13-months of re-training. And sure enough it comes in the form of WBC World Jr. Middleweight Champion Luis Santana, the million dollar plus fight Paz has been waiting for.

As this is Rhode Island in the late 1980s, early 1990s, Younger has fun with the period sets (all Chintz) and costumes (vintage Gap) and the women’s hair styles. Paz’s mother, Louise (Katey Sagal) can’t watch the matches live or on TV. She hides away in her little shrine, surrounded by religious statues, occasionally popping out when she hears cheering.

), they fall short of the authenticity and excitement of that film. The noisy, chaotic family scenes are straight out of David O. Russell’s acclaimed boxing film, The Fighter only they are nowhere near as funny or endearing. Younger keeps the peripheral characters in the background and only Angelo (Hinds) is fleshed out. Sagal’s Louise can’t compete with Melissa Leo’s boxing mother in The Fighter, for which she won an Academy Award but the two roles will beg comparison.

Although Bleed for This

is historically accurate, it feels predictable and familiar. Our intellect knows that we are watching something astonishing that astonished the world, but our heart isn’t up there in the ring. It’s not just that this Paz is a rather distanced, narcissistic and demanding character. It’s that we’ve been here before, only without the distinguishing halo. But once an underdog protagonist is the ring, does it really matter how far he had to climb to get there? Bleed for This

is technically accomplished and certainly holds your interest, but the blood is cold.