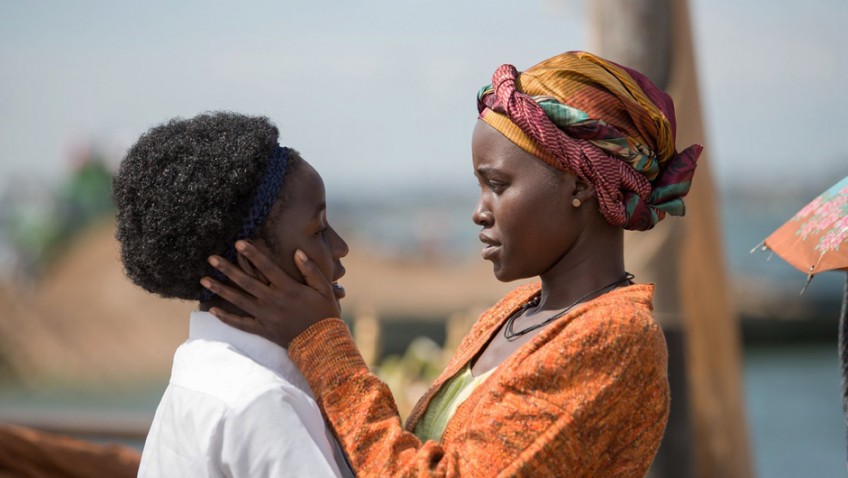 Every few months it seems there is another movie about an underdog who excels in some activity and who overcomes a myriad of obstacles to defeat the naysayers and the privileged.  That almost all of these films are based on true stories and follow an inevitable pattern usually results in a formulaic, if inspirational, film.  This year alone we’ve had half a dozen, including The Man who knew Infinity (Indian maths prodigy at Cambridge); Race (the Jesse Owens story); The Idol (Palestinian wins The Arab Idol singing competition); and, next month, Magnus, (Chess Grandmaster at age 13).

Now Mira Nair, (Salaam Bombay!, Monsoon Wedding), returns to Kampala, Uganda, the setting of her 1991 film Mississippi Masala, with the story of Uganda’s first female chess master, Phiona Mutesi.  The clichés of the genre are all present, and the matches are less gripping that we would expect, but the film has such a big heart that you hardly notice. It is the strength of the performances, from Academy Award winner Lupita Nyong’o (12 Years a Slave) as Phiona’s mother right down to the secondary characters that makes Queen of Katwe

such an uplifting and enjoyable experience.

Katwe is a shantytown on the outskirts of the city of Kampala, where Nair has had a home for the past 25 years. The sense of place is an integral part of the film and it begins with a sweeping shot of the bustling main street where Phiona Mutesi (Madina Nalwanga), age 10, sells maize out of a basket. Phiona has dropped out of school as her mother Nakku Harriet (Nyong’o), who sells vegetables at market, cannot afford the fees.

When Harriet learns that Phiona has a boyfriend, she angers the young girl by chasing him away.  Her older daughter, Night (Taryn “Kay” Kyaze) is kept by an older man and Harriet has all but disowned her. Phiona’s father died of HIV and Nakku is focussed on paying the rent for their hovel.  At one point in the film, the family is evicted with no grace period and forced to sleep rough.

This depressing lifestyle sets the scene for a welcome adventure in the chess world. We are aware that every child and parent in the slums must wonder how they can possibly break the cycle of poverty to get out. For most there is no out, which makes Phiona’s encounter with Robert Katenda such a fateful one.

Robert Katende (David Oeylowo (Selma), soon to be seen in A United Kingdom), has accepted a temporary job coaching football and chess for a religious missionary charity, while continuing to apply for engineering jobs.  Robert is well aware that his address plays a part in his stream of rejection letters but hopes that his top grades will shine through.  There is, then, a nice parallel between the prejudice Robert encounters and that which greets his chess team when it comes to entering competitions.  Most tournaments are between elite schools, but Katwe’s kids are too poor to even go to school.

When Phiona’s brothers tell Robert that their mother has forbid them from playing football because she could not afford the medical bills, he proposes chess, so they don’t feel left out.  Phiona, who has never heard of chess, peaks in out of curiosity and is invited to a session, but she smells so badly that she alienates her peers.  Robert notices that, undaunted, Phiona returns after a shower, determined to try again.  Robert is continually amazed by her natural ability and teaches her to read so that she can read books on chess strategy.   Within a short time she is beating her brothers, and then everyone from the Katwe team.  By the time she is 16 she is a three-time junior girls’ champion of Uganda and is accorded Master status.

, juxtaposes the tournaments with family life, but, perhaps because this is a Disney movie, spares us the worst of Phiona’s miserable existence.  While Disney has released its share of aspirational underdog movies, its African films have primarily been animated fantasies with a cast of animals.  In this respect, Queen of Katwe

is something new, particularly with its all black cast and African locations.

Nair and Wheeler circumvent the clichés to some extent by refusing to heighten the drama of either the matches (we know what is going to happen after all) or the conflicts within the family.  While Harriet at first opposes the chess because she thinks it’s gambling, she is receptive to Robert’s assurances that her daughter has a real gift that could be her ticket out of the slums.  Harriet’s fears that Phiona will find it hard to readjust to her life after travelling to tournaments are well founded. After flying for the first time, experiencing the luxury and food at the hotels and tournaments, the noisy, roofless room that is home is hard to accept.  Harriet allows Phiona to live with Robert and his incredibly generous wife Sara (Kamala resident Esteri Tebandeke) as Robert is finding his work with the chess club more fulfilling than engineering.

Nyong’o transforms a stock role as we feel her every emotion and her inner strength.  Oeylowo, whose breakthrough film, Selma, heralded a major talent, is incapable of giving a bad performance and, like Nyong’o, but with less to do, elevates his mentor role to a higher level.  It’s too early to tell whether Nair’s film will do for Madina Nalwanga what Robert and chess did for her character, but her performance is so effortless and unaffected that at times you feel as if she is the real chess prodigy.

Speaking of which, don’t miss the end credits in which the real people behind this story come out to stand next to their actor characters, as if to remind us that when you wish upon a star, your wish just might come true.  It’s a fitting end to a heart-warming true story.